The Muzaffarnagar riots have changed the destiny of the Rashtriya Lok Dal (RLD) in western Uttar Pradesh. In the aftermath of the riots, the RLD lost its winning Jat and Muslim electoral combination. In 2014, it lost its core vote bank of Jat vote base to BJP and drew a far blank.

Even party patriarch and veteran leader Ajit Singh was pushed to a distant third slot in his traditional seat of Baghpat. The RLD has been finding it hard to regain its lost glory since then and with its possible alliance with the Samajwadi Party and the Congress not working out, it could be pushed to oblivion in state politics.

Now, RJD general secretary Jayant Chaudhary (son of Ajit Singh) is trying to reconfigure politics and make space for himself and the party. 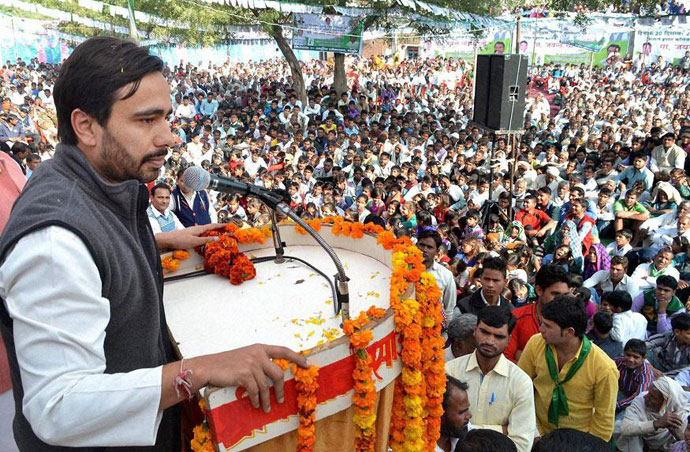 Jat anger against BJP and shift to RLD

Around 35 Khap leaders and thousands of Jats from UP and Haryana recently gathered at Kharad in Muzaffarnagar, under the banner of Jat Arakshan Sangharsh Samiti, to declare that the community would not vote for the BJP again.

The community has presence in 19 western UP districts, forming a chunk of almost 18 per cent vote bank and holds the key to 90 assembly seats. In 65 seats, Jats have 20 per cent-40 per cent presence. And Jats being the dominant agrarian community hold potential to influence voting pattern of other communities, especially the non-Yadav OBCs, the major voter base of the BJP in the area.

Traditionally, the BJP and the BSP have been the strongest in western UP; BSP owing to high concentration of Dalit voter base (22 per cent and majorly the Jatavs, its core support base) and BJP owing to high non-Yadav OBC base and split in minority votes.

The BJP is losing the Jat vote it managed to win in 2014. “Modi tere raj mein, munji gai byaj mein, aur prali gai sharam-lihaz mein (Modi, under your government, all my paddy crop has gone in paying off debts and the hay had to be donated).” Painted behind tractors, this slogan captures the mood of the Jats in western UP.

The Jat vote is moving from the BJP and is all set to be split among the RLD, the BSP and the SP-Congress alliance, with a major chunk returning to the RLD.

And the RLD is not giving away this opportunity. Jayant Choudhary has based his campaign around the lost pride of Jats. In his election speeches, he clamours, "BJP ki pooch nahi, RLD ki mooch bano (Instead of being the BJP’s tail, be the RLD’s pride)".

As the Jats get disillusioned with the Centre, he is betting high on their "maan-samman" (honour) to win the party's lost vote. At the same time, the RLD has given 20 per cent seats to Muslim candidates to stitch up an unbeatable Jat-Muslim voter base. With close to 20 per cent Jats and over 25 per cent Muslims in almost every seat in western UP, this combination could swing huge electoral dividends for the party.

But even with this carefully constructed Jat-Muslim social coalition, it seems a rare possibility that Muslims will vote for Jat candidates and vice-versa (because of the riots).

To overcome this mutual suspicion, Jayant Choudhary is busy cobbling up a broader coalition of agrarian community. By talking of farmer plights and sugarcane issues (which for years had driven politics in this sugar belt) he hopes to carve a niche political space for the RLD.

Almost anybody in Uttar Pradesh can tell you that Akhilesh Yadav has beaten anti-incumbency — he has reinvented himself, is no longer bedeviled by the "bechara" tag and the stories of "four-and-a-half CM" also forgotten.

Traditionally weak in this area, the SP is riding high on the alliance potential to gravitate Muslim vote and Congress’s long on-and-off tryst with farmer issues, including the land bill agitation.

The recent road shows and rallies by the two political scions — Akhilesh Yadav and Rahul Gandhi — have grabbed more eyeballs than ever.

Uttar Pradesh is a land of proximities and possibilities, and Akhilesh Yadav who has changed the election narrative from identity to aspiration, knows very well how much proximity would matter in the sensitive western UP.

In his rallies, he astutely avoided talking about the Muzaffarnagar riots and rather concentrated on his policies. Reports suggest that contrary to the general opinion that Muslims were hurt by his (delayed) action during the riots, the opinion is rather divided and the traditional patronage SP enjoys in the community (and the anti-BJP stamp sealed by the alliance with the Congress), could pull it through all negative opinions. In these elections, they might well increase their tally in western UP.

In race to be the kingmaker

The popular refrain is that while the RLD may not win enough seats to be crowned the king, but in case of a hung Assembly, it may play the kingmaker and as the long history of maverick Ajit Singh goes, he has reaped power benefits, irrespective of whoever has been crowned king.

In UPA II, with only five seats, he played an influential role in making the central government get the Jats listed among the OBC community.

Five decades ago, Choudhary Charan Singh broke ranks with the Congress to become the chief minister and later catapulted to the prime ministerial seat. But his son has switched sides, irrespective of ideological differences to side with the party forming the government, and this election could be a chance for Jayant Chaudhary to build his following and provide his party a lease of life in probably his toughest electoral battle.

One thing is for sure, the landscape of western UP has changed irreversibly by the 2013 riots. There is a growing sense of disillusionment among Jats and a visible goodwill of Jayant Choudhary in the region. But in the wake of all these developments, will there be an en masse movement of Jats towards the RLD?

Will the RLD be able to get its Jat-Muslim coalition working on ground?

Will it succeed in roping in other agrarian community vote around its core Jat vote? Or will it become the invisible fourth force in western Uttar Pradesh?

Whichever direction the wind blows, 2017 will mark the journey of Jayant Chaudhary, and if I have to draw a conclusion from the developments, he is playing mature games and taking calculated moves but may still not be able to hold fort. And Uttar Pradesh politics rarely gives second chances.

Also read: 7 reasons BJP is not winning UP polls (as media would like you to believe)

Post your comment
#Rashtriya Lok Dal, #Uttar Pradesh polls, #Assembly elections 2017
The views and opinions expressed in this article are those of the authors and do not necessarily reflect the official policy or position of DailyO.in or the India Today Group. The writers are solely responsible for any claims arising out of the contents of this article.