Should we be surprised BJP doesn't have a single Muslim candidate in UP?

The trust deficit between Muslims and the BJP seems to have only widened with Narendra Modi's coming to power.

In the Lok Sabha elections of 1998 — when the battle cry of "Mandir wahi banayenge" still dominated the BJP's election narrative — a young Muslim candidate from the BJP got elected from the Rampur constituency of Uttar Pradesh. His name was Mukhtar Abbas Naqvi.

But in the ongoing Assembly elections in Uttar Pradesh, the BJP hasn't fielded any Muslim candidate.

When asked why, party's national spokesperson Shahnawaz Hussain responded by saying that the party couldn't find a "winning" Muslim candidate. 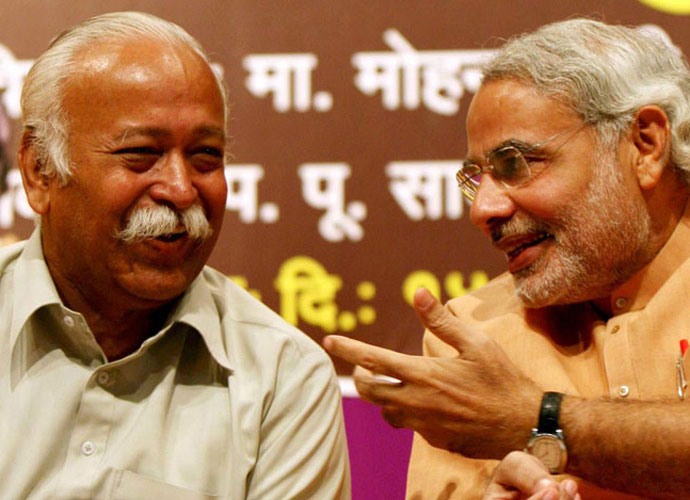 Is it possible that the Lok Sabha election outcome forced the BJP to not give any ticket to Muslims in Uttar Pradesh?

Hussain has not just emerged as BJP's Muslim poster boy, but is also a member of the party's central election committee — which takes a decision on ticket distribution to candidates.

Uttar Pradesh has a Muslim population of 19.3 per cent. Across 73 constituencies in the state, Muslims comprise over 30 per cent of the votes. Out of around one-fifth of the state's  population, the BJP couldn't find a single "winning candidate" (And despite the fact that around 10 per cent Muslims voted for the party in 2014 (Lok Sabha elections).

Interestingly, the BJP claims that it has 11 crore members — something that makes it the largest party in the world. Yet it couldn't find a single Muslim candidate in the entire state. Why will any party do that? Was there a genuine lack of winnable Muslim candidates or did the party deliberately  overlooked the Muslims?

Even the "Modi wave" of 2014  failed to impact BJP’s Muslim candidates. The party had fielded seven Muslims among 482 candidates (1.45 per cent ) nationally and all of them lost.  As a result of that, there's not a single Muslim MP from the ruling party in the present Lok Sabha for the first time in independent India's history. There is  also no one from Uttar Pradesh to represent the Muslims in Lok Sabha.

Is it possible that the Lok Sabha election outcome forced the BJP to not give any ticket to Muslims in Uttar Pradesh?

Even in Bihar, where the Muslim community constitutes 16.5 per cent of the state’s population, it had fielded just two Muslim candidates in the last assembly elections. One of them was its sitting MLA. Both lost.

The perception of the Muslim electorate too about the BJP is not very positive and there is a palpable trust deficit between the two sides. Moreover, it has always proved difficult for Muslim candidates to justify their allegiance to the saffron party.

Similarly, it's also not easy for the BJP to justify the presence of Muslims to the party's right-wing supporters. This trust deficit between the Muslims and BJP seems to have only widened with Narendra Modi emerging as its top leader.

Muslims still blame Modi for the post-Godhra riots in 2002.

For five consecutive Lok Sabha and assembly elections, Modi didn't give a single ticket to Gujarati Muslims — that is 546 assembly and 52 Lok Sabha tickets handed out.

Muslims, who comprise 9 per cent of Gujarat’s population, too don't expect to figure in Modi's scheme of things.

But in an interview to CNN in 2014, Modi, when asked whether he was worried about al Qaeda head Ayman-al-Zawahiri’s video announcement to create a base in India, said, “My understanding is that they are doing injustice towards Muslims of our country. If anyone thinks Indian Muslims will dance to their tune, they are delusional. Indian Muslims will live for India. They will die for India. They will not want anything bad for India.”

Again last year, addressing a BJP national council meeting in Kozhikode, he said: "Do not rebuke Muslims...  They need not be rewarded. Empower them. They are not items of vote market nor are they substance of hate. Treat them as your own,". He was apparently invoking Jan Sangh ideologue Deendayal Upadhyaya.

So, when Modi preaches about empowering Muslims or talks about their patriotism, it certainly gives hope to India's biggest minority community. But when they are squeezed into his (or the BJP's) scheme of things, it only strengthens their doubt.

Many believe there is a huge gap between what he says and does. And, if the prime minister is really keen to bridge the trust deficit, he has to practice what he preaches.

Also read: Why BJP is fighting a lost election in Uttar Pradesh

#Muslims, #Assembly elections 2017, #UP Elections 2017
The views and opinions expressed in this article are those of the authors and do not necessarily reflect the official policy or position of DailyO.in or the India Today Group. The writers are solely responsible for any claims arising out of the contents of this article.