Uttarakhand cloudburst: Has the state not learnt any lessons from 2013?

Death of more than two dozen people due to flash floods leaves more unanswered questions over disaster preparedness in the hill state.

Since the news of cloudburst and landslides following the heavy rains in Pithoragarh and Chamoli districts of Uttarakhand broke early Friday (July 1) morning, there has been a flood of news about the dead, injured and missing people.

Every single news outlet carried a different figure depending on the agency that gave out the data to the reporter concerned.

For most people, the news immediately reminded of the tragic Uttarakhand disaster of 2013 that saw thousands of people killed and hundreds others injured, not to mention the damage to livestock and property, due to flash floods caused after cloudburst in Kedarnath valley.

Unabated construction along the rivers, even within the river floodplains and hillsides; destruction of forests and exponential increase in tourism/pilgrimage activity that leads to exploitation of natural resources are factors that are regularly written about. But more than that, the absence of enough macro-level data clubbed with action/implementation at the ground level are responsible for repeated disasters in the Devbhoomi, Uttarakhand. Landslides following the heavy rains in Pithoragarh and Chamoli districts of Uttarakhand.

Unfortunately, lapse of time has not changed many things and hence 2013 (although much larger in scale) and 2016 cloudburst-induced floods offer similar paradoxes.

A number of agencies are involved in flood forecast, flood management, disaster relief and mitigation action taken post-disaster relief. It is no surprises that the co-ordination between the different agencies of the Centre and the state leave much to be desired.

The flood forecasting done by India Meteorological Department (IMD) – it has a separate mountain weather bulletin – does give a warning days in advance based on the Central Water Commission (CWC) data.

But unfortunately, there is not enough coordination between the forecast agencies and implementation at the local level.

The flood forecasts are uploaded on the IMD and CWC websites for the public. These are also sent to the local administration concerned (as per the typical established government protocol), and then it is the responsibility of the local administration to warn the people likely to be affected due to cloudbursts/floods/landslide, and take precautionary measures, such as removal of people to safe areas.

"Most disasters have been a result of communication failure," V D Roy, the then director of flood forecast monitoring at the CWC, had told me last year (2015) when I did a story about a mobile app in the making to accurately forecast floods and minimise damage.

The extent of damage caused each year is proof enough that the arrangement needs to fill the huge gap. The damage – as officially documented by CWC – shows that the area affected by floods rose from 2.29 million hectares (mha) in 1953 to 31.58 mha in 2013. 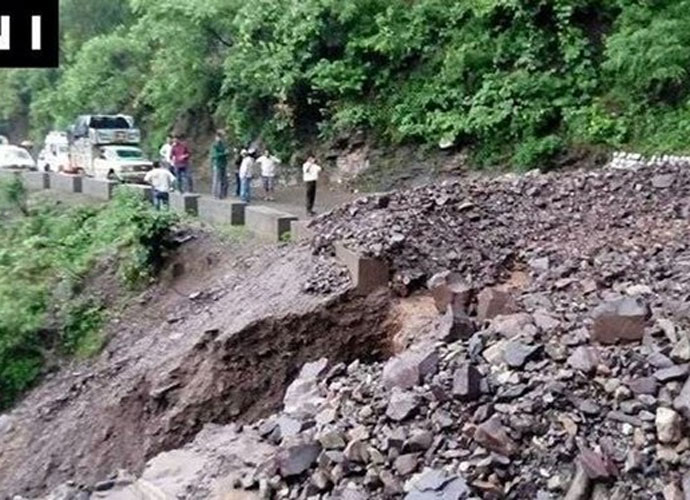 Incidentally, 2013 was when Uttarakhand witnessed one of the worst floods caused due to excessive rainfall following the cloudburst in Kedarnath valley. The total damage (all India) caused due to floods, as per CWC, was estimated at Rs 11,095.14 crore during 2013.

Starting 2015, India has also started a major programme of monitoring every glacier that is ten sqkm and above in the Indian Himalayas.

Apart from ascertaining the availability of water – melting of glaciers feed almost half of the Indian subcontinent – the study will also help in keeping track of glacial lake outburst flood (GLOF), a phenomenon that had happened in case of bursting of the Chorabari glacial lake, few hundred metres above the Kedarnath temple in 2013, that wiped out the entire Kedarnath township, except the ancient temple, and killed scores of people.

#Uttarakhand cloudburst: Roads blocked due to landslides, being cleared in Chamoli district pic.twitter.com/toGYx7Xt7d

The Indian Space Research Organisation (ISRO), which monitors glaciers and also movement of monsoon clouds, has been claiming to put out in public domain all its data, but people facing problems such as lack of power, lack of mobile/internet connectivity can hardly access this data to understand the movement of clouds.

Disaster management agencies do have access to this data at their national and regional headquarters, and hence, they are tasked with warning the relevant state authorities.

But given the track record, it is found that most of the activities taken up as part of disaster management – NDRF teams have been deployed in Uttarakhand soon when news broke about cloudburst – are in "response" to the disaster and not something that can qualify as "preventive steps" or "mitigation" action.

Burden falls again on the local administration of the state concerned.

Uttarakhand is one of the three states (other two being Rajasthan and Manipur) that have enacted legislations for flood plain zoning. The flood plain, as per the model bill circulated by the ministry of water resources and sent to states, includes water channel, flood channel and area of nearby lowland susceptible to flood inundation.

Similarly, flood zone was defined as the area required to carry the maximum probable floods. But even when Uttarakhand did its job on paper, poor implementation leads to damage.

#Uttarakhand: Visuals of rescue operations being carried out by SDRF in worst-hit Bastadi village of Pithoragarh. pic.twitter.com/xYcVKAFmxe

Another aspect is the missing umbrella regulation.

In its May 2016 "Action Taken by the Government" report, the Parliamentary Standing Committee on Water Resources has noted with "dismay" that the guidelines and notifications on the River Regulation Zone (RRZ) that are to be issued by the Ministry of Environment, Forests and Climate Change (MoEF) are "only at a draft stage". It asked the government to finalise and issue a notification regarding this.

Management of water resources, including flood management, falls within the purview of states. But the parliamentary committee felt that "the role of Union government should extend beyond this as not all flood-prone states were well equipped to manage the devastating floods with the limited resources they have".

For instance, across India, there are 708 stations for flood forecasting, while more than 400 are in the pipeline. Uttarakhand has IMD gauges at all districts apart from those by other agencies such as Wadia Institute of Himalayan Geology. River Alaknanda has risen above the danger level mark after a cloudburst in Chamoli district. (Photo: ANI)

But for a hill state that has areas ranging from 2,000 feet in altitude to those at 12,000 feet and higher altitude – especially areas which do not have villages but can wreak havoc by sending in floods downstream – within a span of few hundred kilometres, these surely fall short.

In fact, not just Uttarakhand, all Himalayan states need a much denser network for monitoring weather that can capture data from all types of terrains – low-lying areas, valleys, mid-altitude villages, higher altitude pilgrim places, everything.

Building of dams for flood management, and Hydro-Electric Projects (HEP) are a much debated infrastructure issue. Obstructing the flow of rivers through what has come to be known as "cascade dams" has more often than not caused more damage rather than mitigate floods.

The Chopra Committee – formed under the direction of the Supreme Court to study if "the HEPs exacerbated the deluge that caused massive destruction in the state in June 2013" – had objected to the construction of HEPs in the para-glacial regions (2,200-2,500 metres above sea level).

As reported by the media back then, Dr Ravi Chopra had said, "There are as many as 76 HEPs of more than 3,100 MW capacity in Uttarakhand in para-glacial region. We have proposed that no HEPs should be built in this region as it has loose glacial debris which when carried downstream can be disastrous."

Kedarnath witnessed exactly this. But the change in government at the Centre, unfortunately, has not meant change in the stance on hydro-power projects in the Himalayan states.

Major cause of damage – tourism:

But it is not just the excessive rains or floods that cause damage. It is what is in the way of natural flow of water that causes much more damage.

Excessive influx of tourists/pilgrims has led to development of increased infrastructure in river basins – roads, buildings, hotels, lodges, roadside kiosks and bridges – and even led to increased vehicular traffic.

The exponential increase in building activity – preceded by loss of forest cover – is a clear cut compromise on the natural systems of water management. Plus these concrete structures being on the roadside, or the river flood plains pose as a double hazard – first, it obstructs flow of water/river, and then face danger of being washed away by floods.

One of the first steps that the Uttarakhand government can take is what senior journalist Mrunal Pande suggested.

#Uttarakhand floods 2013, #Uttarakhand cloudburst
The views and opinions expressed in this article are those of the authors and do not necessarily reflect the official policy or position of DailyO.in or the India Today Group. The writers are solely responsible for any claims arising out of the contents of this article.