The YSRCP’s first representative in the Rajya Sabha, an affable politician with a cool demeanour, Vijay Sai Reddy gets candid in an informal conversation ahead of the election results.

In a meeting that spanned roughly 30 minutes, I saw the beaming face of a man poised for a huge electoral victory.

Vijay Sai Reddy Venumbaka is confident that the party led by YS Jaganmohan Reddy is headed for a sweep when the votes are counted on May 23, 2019. He expects the party not only to wrest power from the incumbent Telugu Desam Party (TDP) in the state — but is also eyeing a whopping majority of Lok Sabha seats out of the 25 in Andhra Pradesh.

However, 61-year-old Sai Reddy is firm on not being addressed as number two in the party. “There is no number two. It doesn’t work like that in regional parties. In our party, from number one to ten, it is Jagan. After that, all are equal,” he tells me in a candid conversation at his residence where I heard candid responses from the man touted to be second-in-command in the YSR Congress Party (YSRCP).

The chartered accountant-turned-politician is known to be Jagan’s confidant — a man Jagan trusts with his all.

He has stood by Jagan through thick and thin and was named as the accused two (A2) in almost all the disproportionate assets cases slapped against Jagan, who was accused one (A1). The sexagenarian with a shock of white hair has been documented in almost all media footage that has recorded Jagan’s tussle with the CBI and the ED. Even now, the duo has been attending hearings in court every Friday.

However, Sai Reddy is unfazed by all the charges.

“I am confident that we will come out unscathed. We have not done any wrong. The cases against us were, to my mind, foisted by Chandrababu Naidu, his associates and some in the Congress. They are all politically motivated, I would say,” he categorically states.

Reddy’s association with the YSR family dates back to 1978, according to media reports, when the former married the daughter of Lakireddipalli MLA Ghandikota Rama Subba Reddy. YSR, who was also an MLA, had attended the wedding and instantly took to the shy and soft-spoken groom. There was no looking back. The chartered accountant hailing from Nellore district who qualified as a finance professional in Chennai went on to become the financial advisor to the YSR family and by 2004, was almost exclusively looking after the family’s business interests. “I cannot trace my connections with the YSR family in a nutshell. And certainly not in two minutes!” says the man who makes no qualms about being a clan loyalist. "The relationship has a long history...," he muses "To do justice to it, I will have to narrate it in leisure,” he smiles.

Every step of the way: A family loyalist, Vijay Sai Reddy has walked with Jagan through thick and thin. (Photo: Facebook/ @VijayaSaiReddyOfficial)

Reddy's first step into the limelight was when he was appointed Member of the Tirumala Tirupati Devsathanams (TTD) during Rajasekhara Reddy’s regime as Chief Minister. Subsequently, he was appointed director of the Oriental Bank of Commerce — and the stint was subject to controversies, including a CBI allegation that during his tenure between 2006 and 2008, Vijay Sai reportedly got loans worth Rs 800 crore sanctioned to Jagan’s group of companies.

“The skullduggery of the TDP would be exposed as soon as the new government is in place,” he now says about the charges.

He takes to Twitter to pass acerbic remarks against his detractors with sarcasm and snide observations. Sometimes, his attacks are too direct as he doesn’t mince words.

For instance, in this tweet, he mocks politician-turned-political analyst Lagadapati Rajagopal’s exit poll survey on the Andhra Pradesh Assembly polls.

“Lagadapati is eking his living from the crumbs of contracts that were thrown at him by Chandrababu, besides his commissions from bookies. 90% of bettors in Bhimavaram and Vijayawada have put the odds in favour of the “Fan” (symbol of the YSRC). Lagadapati and kerosene oil are staging a drama for Babu (Chandrababu Naidu) and his bookies," the tweet states acridly.

Here, "kerosene oil" is an allegory for Vemuri Radha Krishna, who runs the Andhra Jyothi newspaper and is purported to be Naidu's aide. There have been accusations against Radha Krishna by his detractors of apparently pilfering kerosene oil from PDS ration shops.

When I asked Vijay Sai of Chandrababu Naidu’s claims that the TDP is “1,000% sure of winning the state”, Reddy scoffs. “It is a mathematical hyperbole. Our 100% confidence makes real sense,” he remarks.

Vijay Sai is the backroom boy of the YSR Congress and is said to be a master strategist. Believed to have been the brain behind roping in Prashant Kishor to work for the party, he smiles the question away cryptically when I ask if it is true. However, what has been established as a fact is his reported proximity to top-notch political figures from parties of all ideologies — he could very well be Jagan’s main man when it comes to political alliances after May 23. 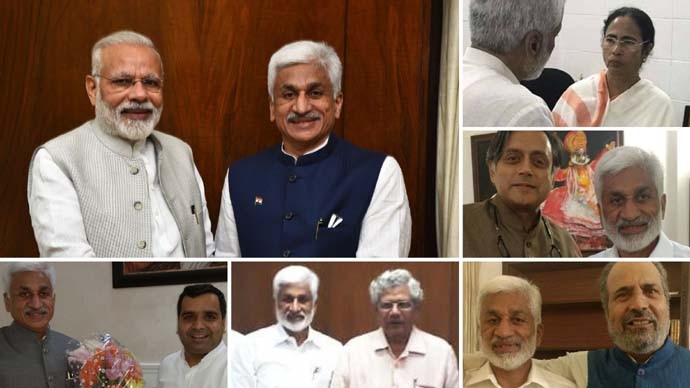 In the corridors of power: Vijay Sai Reddy is a familiar face in the political chambers of Delhi. (Photo: Facebook @VijayaSaiReddyOfficial/ DailyO)

“He plans everything and acts accordingly,” says Devarakonda Ramabhaskar, joint secretary and in-charge of YSR Congress Delhi office. As someone who works very closely with Reddy, Ramabhaskar avers that there is not an iota of confusion in Reddy’s communications or actions. “He has utmost clarity on issues that have to be executed by himself and on those that have to be delegated. For instance, he is inviting the party’s former MPs and the present candidates (for Lok Sabha elections) for a meeting with the Election Commission of India’s three-member board. They are planning to submit a representation in less than 18 hours from now. Just look at his composure and how coolly he is handling it. This sums up his persona. His clarity of thought and dexterity of action is unparalleled,” says a clearly awestruck Ramabhaskar.

The articulate Reddy’s speeches in the Rajya Sabha on the banking and finance sectors display the same level of clarity.

However, on being asked whether YSRCP is eyeing an alliance with the BJP, Reddy is evasive. “What makes you think that we would go with the NDA?” he retorts. “Are you confident that NDA would come to power in Delhi?”

The focus on getting Special Category Status for the bifurcated state has been YSRCP’s long-standing agenda. Reddy stands unwaveringly on the cause. Will Jagan's confidant Vijay Sai Reddy help shape both AP and politics in Delhi after May 23? (Photo: Facebook/ @VijayaSaiReddyOfficial)

“We are equidistant from the NDA as well as the UPA — Jaganmohan has clarified umpteen times that YSRCP would support any party that sanctions Special Category Status to Andhra Pradesh,” he stoutly states.

“Including Congress? The party that was chiefly responsible for Jagan’s incarceration?” I ask.

“Why not? We have no problem working with whoever gives — and promises are not enough — Special Category Status to Andhra Pradesh,” Reddy avers.

Reddy is clearly Jagan’s Man Friday in Delhi. If YSRCP gets adequate seats in the Lok Sabha polls (as has been shown in the exit polls), I might well be talking to a Union Minister-in-waiting. About his own future though, Reddy is modest. “My role is clear. Come election results, it would be my endeavour to execute whatever Jagan wishes of me in Delhi that is for the welfare of the state.”

I ask if that includes lobbying in the corridors of power for their acquittal in the DA cases, as has been the accusation levelled against him by his nay-sayers through his stint as a Rajya Sabha MP.

Reddy brushes that off like dust from his shoulder. “I lobby for the benefit of Andhra Pradesh — the naysayers can say all they want. While I don’t want to count the proverbial chickens before they hatch, the answer is for all to see in a matter of a few days,” he says, winding up our conversation.

Post your comment
#V vijay sai reddy, #YS Jaganmohan Reddy, #YSR Congress, #Lok Sabha elections 2019
The views and opinions expressed in this article are those of the authors and do not necessarily reflect the official policy or position of DailyO.in or the India Today Group. The writers are solely responsible for any claims arising out of the contents of this article.