The senior party leader has been well rewarded for his devotion to PM Narendra Modi and Amit Shah.

Senior BJP leader and the Union cabinet minister holding the twin portfolios for Housing and Urban Affairs and Information and Broadcasting, M Venkaiah Naidu is the party’s choice to contest the polls for the post of the vice-president of India.

The BJP Parliamentary Board met in the evening today, July 17 to choose Naidu as the V-P nominee and the decision has come barely hours after the presidential elections took place earlier in the day.

Speculations were rife about Naidu being the front-runner in the vice-presidential nominations, and the BJP veteran will be contesting against the Opposition’s pick, Gopalkrishna Gandhi, veteran diplomat as well as former West Bengal governor who is also Mahatma Gandhi's grandson. 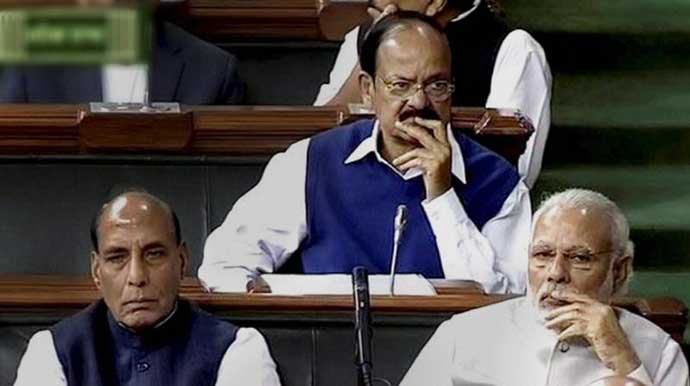 Naidu is the top choice and it seems the veteran leader, also known for his penchant for acronyms, has been richly rewarded for his proximity and devotion to PM Narendra Modi and the BJP national president Amit Shah.

The vice-presidential elections will be held on August 5 and July 18 was the last day to file nominations. With the Opposition going ahead and announcing Gopalkrishna Gandhi’s candidature, the BJP-led NDA played defensive in its V-P pick. Moreover, current vice-president Hamid Ansari has his tenure till August 10, and the contest seems to be much tighter than the foregone conclusion of the presidential polls that took place earlier today.

Naidu, 68, had kept a low profile and been tight-lipped about the chances of him being the V-P nominee for the BJP. It’s evident that he may not be very accepting of giving up his prestigious position in the Union Cabinet in order to work under a low-key party member such as Ram Nath Kovind, who would easily ace the presidential polls when the results are declared on July 20.

Even last month, Naidu said: "Never am I going to participate in the vice-presidential elections even if anyone compels me."

If Ram Nath Kovind as the presidential choice was about caste calculations, the name of Venkaiah Naidu has cropped up because of his southern connection. Naidu hails from Andhra Pradesh, and the BJP is looking for inroads into the south of the Vindhyas.

With elections due in Karnataka next year, the Naidu connect may help the BJP gain a toehold, while strengthening its position otherwise. Moreover, in states like Tamil Nadu, where the BJP is constantly meddling and acting behind the scenes, having a Naidu in a top ceremonial post would mean easier negotiations.

The vice-president is also the head of the Upper House, and has the same position as the Speaker does in Lok Sabha, or the lower house of Parliament. Naidu’s four term stint at Rajya Sabha, the latest being a nominated MP from Rajasthan, means the leader has considerable experience in managing the Upper House which has over 40 Bills pending and which must be discussed in the Monsoon and Winter sessions of Parliament.

Moreover, with the BJP government bringing in a host of Bills as Money Bills to bypass Rajya Sabha where they do not have enough numbers, it seems having a favourable head helps the BJP’s cause to manage the Upper House better. During the last Budget session, the Rajya Sabha saw much uproar in the wake of Finance Bill 2017, which the Upper House panned and made several revisions to, all of course rejected.

Naidu was elected to the Rajya Sabha in April 1998, only to be re-elected in 2004, 2010 and 2016. He has overseen a number of parliamentary committees and is well-versed with the ways of the House. Given that Rajya Sabha would remain a site of potential conflict over the pending Bills, this crucial experience comes in Naidu’s favour.

From being imprisoned during the Emergency under the maintenance of Internal Security Act (MISA),  when he was leading the Janata party Youth Wing in Andhra Pradesh from 1977-80, Naidu has had an illustrious career as an anti-Congress politician. He was first elected as an MLA in the Andhra Pradesh Assembly in 1978, and was part of the Jana Sangh movement.

From leading BJP’s youth wing since the party’s foundation in 1980 till about 1983, to leading its legislature party in AP Assembly from 1980 to '85, to holding the post of the BJP’s state president in Andhra Pradesh from 1988 to '93, he has proven his mettle a number of times.

Naidu was even the BJP’s national general secretary between 1993 and 2000, and he briefly held the post of BJP national president twice, once between July and December 2002, and then during January-October 2004. He has been a veteran party spokesperson, representing the BJP in various capacities, while elucidating on party positions on important issues.

Naidu has always held that Narendra Modi is the best thing to happen to India in a long time, and he’s also (in)famous for a whole lot of MODI acronyms which are hagiographic in nature. Even though ridiculed by the Opposition as well as by many on social media, Naidu has been generously rewarded for his devotion to the dual power core of the BJP government and the party.

A farmer’s son, Venkaiah Naidu Garu brings years of experience in public life and is admired across the political spectrum: PM Modi pic.twitter.com/UkSZgppQGY

However, Naidu has been a far more prominent BJP face than former Bihar governor Ram Nath Kovind. Given that Naidu will have to work under Kovind in case the latter becomes the next President of India, almost a sure-shot development, complications may arise out of ego clashes and the twin offices.

Also read: Why PM Modi won’t pick any of these 7 leaders for president of India's post