After 121 years have passed it would be difficult to figure out who first started this myth.

The US President Barack Obama stood in front of a packed Siri Fort auditorium, and with TV cameras recording his every word and gesture, quoted Swami Vivekananda’s speech at the Parliament of Religions held in his home town of Chicago, over 121 years ago. Obama said Vivekananda began his speech with the words - "sisters and brothers of America". There is an old saying that if something is said enough times, it slowly becomes the truth. That is possibly what has happened to the unjustly famed - "sisters and brothers of America" quote, that even the most powerful Obama fell for.

There is a book that has been out of print for several decades now, possibly for close to a century. The title of the book is A Chorus of Faith as Heard in the Parliament of Religions held in Chicago, September 10-27, 1893. This is the gathering in Chicago that Swami Vivekananda attended and is famously believed to have begun his two minute allotted speech by saying "sisters and brothers of America". It is also famously believed that Swami Vivekananda was the only one there representing India and so impressed was the Parliament of Religions with his speech that he got to extend his allotted two minutes by several more.

I say "famously believed" because that is what we in India have always known, because that is what Hindus thump their chest about. None of us alive lived in those times, not Obama, not Modi, not me nor any of the chest thumpers. All we have is second hand, third hand or more feasibly nth hand knowledge. So I too was much amazed at what I read in this book that is part of the US Library of Congress collection. I wish Obama had read it, before he went out on a limb and made his speech at Siri Fort. 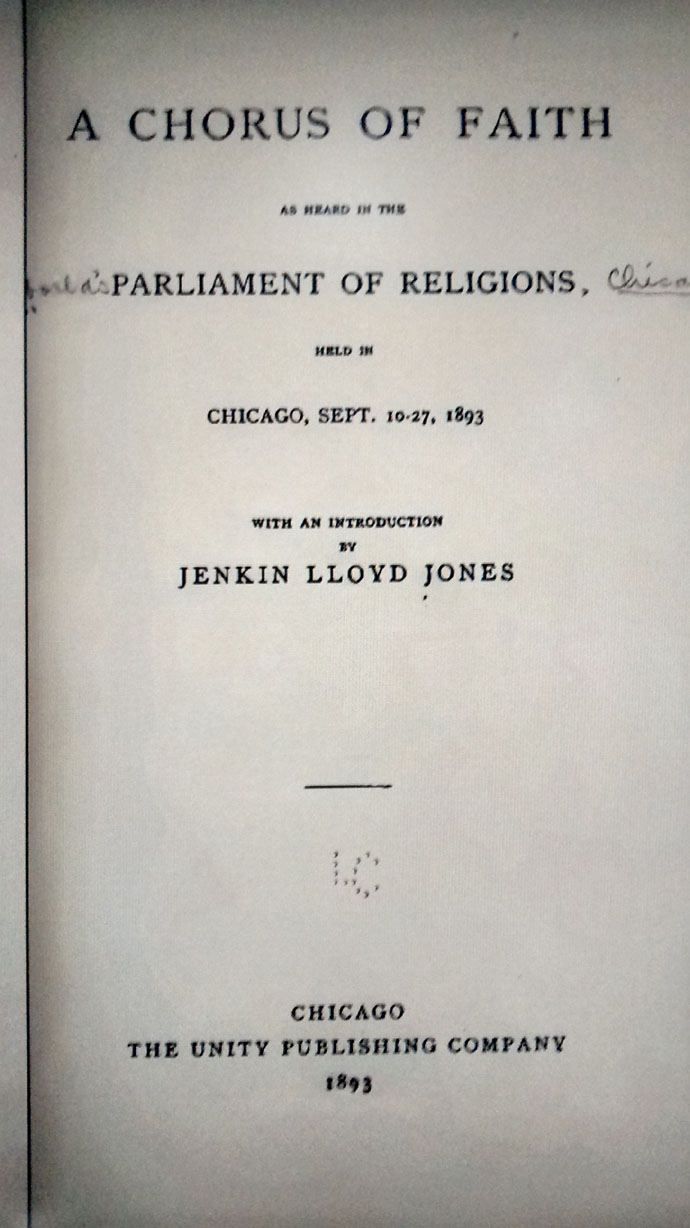 But for anybody who keeps quoting how Vivekananda swept America off its feet, here is what has been recorded in this book by those who attended the Parliament of Religions. The introduction of the book begins by saying – "This compilation contains one hundred and sixty seven extracts from one hundred and fifteen different authors, all of them taken from the utterances of the main Parliament".

In the second page of the introduction it is written – “The extracts are made from the necessarily hasty, but, in the main, remarkably full and satisfactory reports which appeared from day to day in the Chicago Herald. To this paper due acknowledgement is here made”. The introduction goes on to say - "The Parliament, if it has proved nothing else, has proved what a splendid thing human nature is to build a religious fellowship upon. Who cares for a creed which a prophet like Mozoomdar cannot sign? Who wants a church that has no room in it for a Pagan like Dharmapala? Who would insult the memory of Jesus by excluding from a so-called “Lord’s table” those who served his brothers and sisters in the land of the cherry blossoms, the beautiful isles of the Pacific — those gentle teachers, Hirai, and his mild and cultivated associates? Having listened to the dignified Pung Quang Yu we can never again abuse the Chinese with as stupid a conscience. Having heard Bishop Arnett and Prince Massaquoi, it will be harder than ever to spell negro with two 'g's'. The Parliament demonstrated the essential piety of Terrence, when he said, 'I deem nothing foreign that is human'."

The reader will notice that no mention of Vivekananda has been made, though in India it is believed that he made such great an impact. The reader will also notice that at least one more Indian name has made its presence felt – Mozoomdar, another Bengali like Vivekananda. Also notice that many religions have found mention but not Hinduism. But this is only the introduction let us turn a few more pages of this obsolete but relevant book.

The first chapter of the book deals with the opening speeches and greetings at the event. The eighth speech is made by Protab Chandra Mozoomdar and he begins by saying, “The recognition, sympathy, and welcome you have given to India today are gratifying to thousands of liberal Hindu religious thinkers, whose representatives I see around me, and, on behalf of my countrymen, I cordially thank you. India claims her place in the brotherhood of mankind, not only because of her great antiquity, but equally for what has taken place there in recent times. Modern India has sprung from ancient India by a law of evolution, a process of continuity which explains some of the most difficult problems of our national life. In prehistoric times, our forefathers worshiped the great living spirit, God; and, after many strange vicissitudes, we Indian theists, led by the light of ages, worship the same living spirit, God, and none other”. By this it can be inferred that Mozoomdar was from the Brahmo Samaj and not mainstream Hinduism.

The tenth speaker at the opening was another Indian – BB Nagarkar again representing the Brahmo Samaj and he in his speech said that he came from the city of Bombay – the first city of the British Empire.

The 14th speaker at the opening was Prof CN Chakraborty whose opening lines were “I am here to represent a religion, the dawn of which appeared in a misty antiquity which the powerful microscope of modern research has not yet been able to discover; the depth of whose beginnings the plummet of history has not been able to sound. From time immemorial spirit has been represented by white, and matter has been represented by black, and the sister streams which join at the town from which I came, Allahabad, represent two sources of spirit and matter, according to the philosophy of my people”. From this then we can safely conclude that this third Indian speaker at the opening ceremony was indeed a Hindu.

The 18th speaker was Virchand R Ghandi whose opening lines were: “I, like my respected friends, Mr Mozoomdar and others, come from India, the mother of religions. I represent Jainism, a faith older than Buddhism, similar to it in its ethics, but different from it in its psychology, and professed by 1,500,000 of India's most peaceful and law-abiding citizens.” 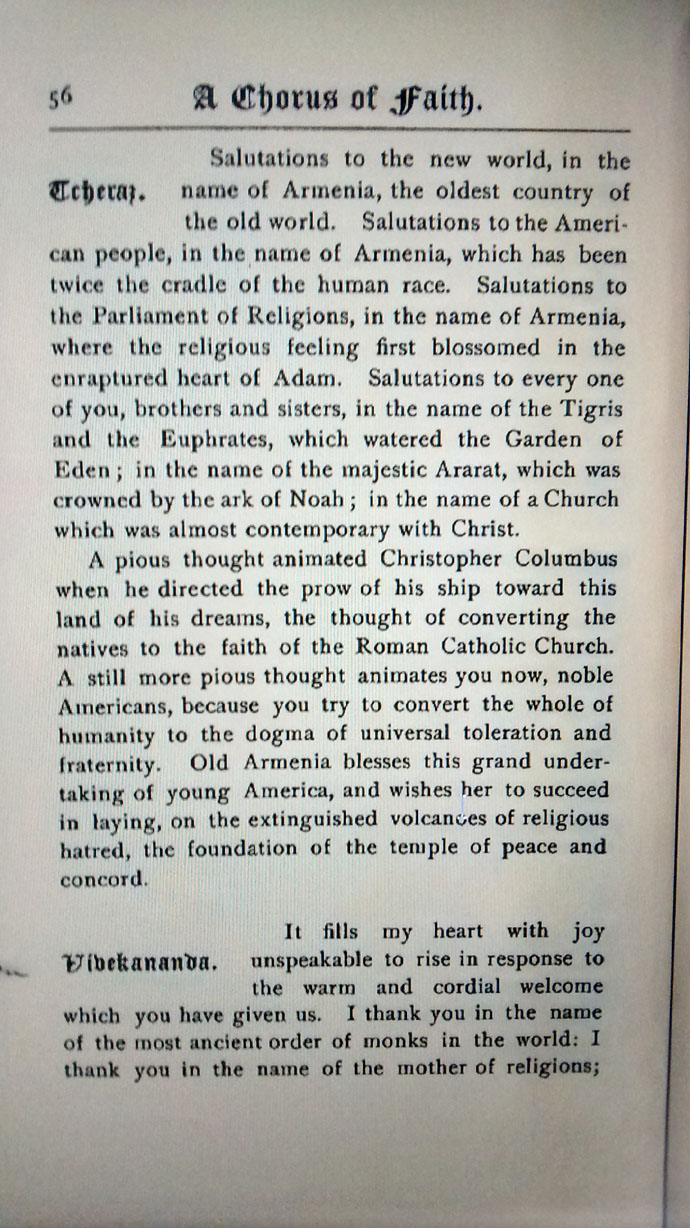 At another instance, on the theme of the soul, Vivekananda began, “The human soul is eternal and immortal, perfect and infinite, and death means only a change of centre from one body to another. The present is determined by our past actions, and the future will be by the present”.

The penultimate speech of Vivekananda that is listed in this book quotes him speaking on the theme of oneness of all living beings. His opening lines of this speech goes like this, “If there is ever to be a universal religion, it must be one which will hold no location in place or time; which will be infinite, like the God it will preach; whose sun shines upon the followers of Krishna, or Christ, saints or sinners, alike; which will not be the Brahmin or Buddhist, Christian or Mohammedan, but the sum total of all these, and still have infinite space for development; which in its catholicity will embrace in its infinite arms, and find a place for every human being, from the lowest grovelling man, from the brute to the highest mind, towering almost above humanity, and making society stand in awe and doubt his human nature.”

Vivekananda spoke again at the farewell session, and his ending lines were, “If anybody dreams of the exclusive survival of his own and the destruction of the others, I pity him from the bottom of my heart, and point out to him that upon the banner of every religion would soon be written, in spite of their resistance: Help and not fight, assimilation and not destruction, harmony and peace and not dissension."

There is no doubt that Vivekananda made some powerful speeches in Chicago, so did the other Indians, and nowhere in the 344 page book, is there any mention of "Sisters and brothers of America" by Vivekananda. After 121 years have passed it would be difficult to figure out who first started this myth that Vivekananda said those lines. But we must remember that the Swami was a missionary and he had a mission to accomplish. It is certainly sad that a century of haziness has obliterated the names and words of the other six Indians who too spoke at the Parliament of Religion, who too held high their beliefs and the ethos of their country, who too made an impact, some of them arguably a lot bigger one than Vivekananda. But it is marketing that often dictates success between one product that is popular from an equally good or possibly better product that failed the advertising test.

To set the record fair here are the names of the Indians who were delegates at the Parliament of Religions in Chicago in 1893 as listed in the index of this book – A Chorus of Faith. You will notice that there is even a woman in the list from 1893 - but does anyone care to remember?

There is a chance that I may be wrong in my assessment, but given the gap of time, I may also be as right as Obama and Modi and millions of others are wrong. Just because a greater number of people believe in something does not make it fact. All one can do is base our understanding on peer accepted documentation by those who actually witnessed the events.

#Barack Obama, #Swami Vivekananda, #Obama's Speech
The views and opinions expressed in this article are those of the authors and do not necessarily reflect the official policy or position of DailyO.in or the India Today Group. The writers are solely responsible for any claims arising out of the contents of this article.