Eight months is a long time, at least in the state of Tamil Nadu where the political tide turns faster than the sea waves. So when VK Sasikala, the woman considered to be former CM J Jayalalithaa's shadow, came back to Chennai after eight long months, it became an occasion for celebration for AIADMK members from her camp.

For the uninitiated, Sasikala was out on a five-day emergency parole to visit her ailing husband in Chennai. The 61-year-old leader is serving a four-year sentence at Bangalore Central Prison after being held guilty in a disproportionate assets case.

Even though the jailed leader and her family is largely blamed for the infightings within the AIADMK - which led to three factions within the party and a lot of political twists and turns - she still seems to enjoy considerable fan following.

While her parole ended on Wednesday, Sasikala found a long line of people waiting outside the residence of Krishnapriya in Chennai's T Nagar, where she stayed during those five days. Krishnapriya is the daughter of Sasikala's sister-in-law and jail mate Ilavarasi.

Even at the Gleneagle Global hospital, where her husband Natrajan is undergoing treatment, the euphoria witnessed at her arrival goes on to say that Sasikala still holds control over a section of the party. 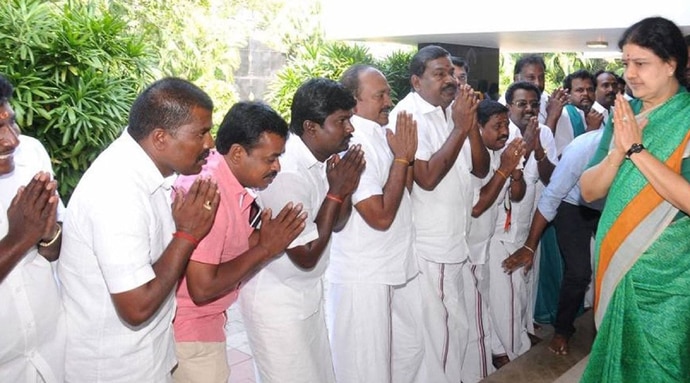 The 61-year-old leader is serving a four-year sentence at Bangalore Central Prison after being held guilty in a disproportionate assets case. (File photo)

It certainly wasn't what people were used to see with Amma's arrival to any venue, but the sight of people jostling to catch a glimpse of Sasikala despite the police discouraging the crowds says a lot about her clout.

At the end of the five-day parole when she started her journey back to Bangalore's Parapanagrahara prison, the roads were filled with AIADMK party workers who had come to give a send-off to their Chinamma. Within the first few kilometres from Krishnapriya's residence, Sasikala's vehicle was stopped by women supporters who organised an "aarti" and broke coconuts in front of the car.

Tear-eyed women were seen rushing to the front seat and screaming, "Chinnamma, we will be waiting for you. Don't worry you will be the one to always win."

If that was not enough, just metres ahead of the Raj Bhavan in Chennai, the convoy was stopped by a small group of people with the party flag in their hands raising slogans of Chinnamma.

Sasikala, unlike Jayalalithaa, never enjoyed a god-like stature among people. But it was fascinating to see how the party cadres wanted to bid a grand farewell to their leader.

A few couples, in fact, wanted their children to be named by Sasikala. One of those proud parents told me: "How many children have the good fortune to be named by Chinnamma?"

The sloganeering continued till Sasikala and her convoy crossed the Tamil Nadu border leaving one to wonder if she and her family still enjoy so much popularity among party cadres, or was it just a show of strength made possible by nephew TTV Dhinakaran. It's difficult to say anything at the moment.

As Sasikala and her convoy went out of sight, a teary-eyed party worker told me: "Even lord Rama had to stay in exile for 14 years before returning to Ayodhya and winning the throne. Chinnamma too is off on a similar exile. When she returns, the throne will be waiting for her."

Also read: Why India is home to few of the most corrupt women politicians