India Today Editor-in-Chief Aroon Purie examines the ultimate political battle of Modi versus Mamata ahead of the 2021 West Bengal Assembly elections, in the November 30, 2020 edition of the India Today Magazine.

That Prime Minister Narendra Modi and home minister Amit Shah have converted the BJP into an electoral juggernaut is fairly well known. Just how relentless that machine is became apparent just a day after the Bihar election results. No sooner had the BJP become the dominant partner in Bihar than the prime minister, in a victory rally at the party headquarters in New Delhi on November 11, trained his party’s sights on the next prize—the state of West Bengal, where elections are due in less than six months from now.

Three other big states — Tamil Nadu, Assam and Kerala — also go to polls in 2021, but West Bengal remains special. There are several reasons for this, not least its charismatic chief minister Mamata Banerjee. But with 42 seats, Bengal also has the third-largest chunk of Lok Sabha seats, offering the BJP immense room for growth. In the 2019 Lok Sabha election, the party’s vote share grew phenomenally—from 17 per cent in 2014 to 40.64 per cent, just three percentage points short of the Trinamool Congress’s share. It saw the BJP win, for the first time, 18 of the 42 seats (compared to the mere two seats in 2014) while the TMC’s tally fell from 34 to 22. 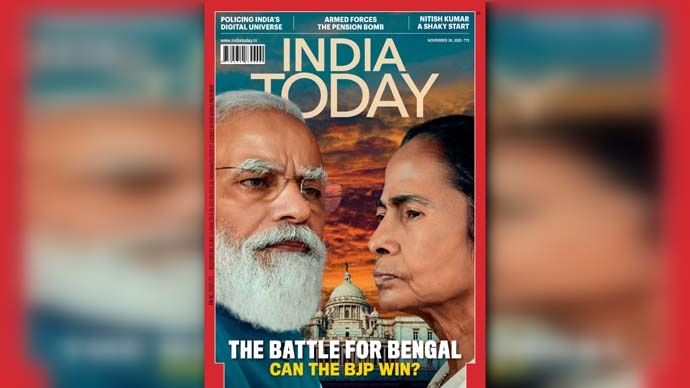 Three political parties have dominated Bengal’s politics. The Congress ruled the state for the first 25 years, followed by the Left Front, which ran the world’s longest-running democratically-elected Communist government for 34 years. Finally, the TMC of Mamata Banerjee, with her doggedness, routed the deeply-entrenched Left in 2011.

In Mamata, the BJP has a foe who has stood like a rock in their path, relentlessly baiting them for the past six years. A trenchant critic of the prime minister, she has consistently opposed his government’s policies, be it demonetisation, GST or CAA-NRC. She has been the fulcrum of opposition unity, bringing like-minded parties together in a loose federal front, starting from her swearing-in ceremony in 2016; she could do so again ahead of the 2024 Lok Sabha election. Defeating her could clear the road for the BJP in the next parliamentary elections.

But Mamata, going by TMC’s performance in 2016, will be no pushover. The party polled a whopping 44.9 per cent vote share, winning 211 of the state’s 294 seats. The BJP’s state unit, on the other hand, is riddled with infighting; it also has no local leader of the stature of Mamata who can take her head-on. With a ground-level understanding of politics, Mamata is a tenacious rival who has fought many political battles. The BJP government’s Citizenship (Amendment) Act has helped her consolidate her position among Muslims, who make up 28 per cent of the state’s population. And religious polarisation was rampant in the state in the 2019 Lok Sabha election, going by a CSDS-Lokniti survey. The BJP cornered 57 per cent of the Hindu vote and the TMC 70 per cent of the Muslim vote and only 32 per cent of the Hindu vote.

Mamata also has a razor-sharp political instinct and does not hesitate to make mid-course corrections. For instance, when she realised that she was falling into the trap of being labelled a politician given to minority appeasement, she rapidly changed tack, spending money on Durga puja pandals and flaunting her religion. Aware that Bengalis are very proud and protective of their culture, she is quick to cast any attack on her government by the BJP as an assault on Bengali asmita (pride). In contrast to the BJP’s aggressive dare, ‘Ebar Bangla, parle shamla (This time Bengal, save it if you can)’, Mamata’s slogan of ‘Ma, Mati, Manush’ is gentler. As Iman Kalyan Lahiri, professor of political science at Jadavpur University, puts it, “It is rooted in the soil and is all about us, the people.”

Yet, the BJP remains resolute in its game plan. It will exploit the inevitable anti-incumbency following nine and a half years of her rule. Although it may not have a credible CM face, it has a trump card in Prime Minister Modi. He is believed to be polishing up his Bengali and trying to deflect the TMC’s charge of the BJP being an outsider by playing up the role of Syama Prasad Mookerjee, founder of the Bharatiya Jana Sangh. The party is also raking up the violence, corruption and nepotism associated with Trinamool rule and attempting to attract disenchanted TMC leaders and Left Front workers.

Our cover story, ‘The Battle for Bengal’, written by Associate Editor Romita Datta, looks at this ultimate political battle: Modi versus Mamata. “Bengal is up for a different game this time,” says Datta. “The Communists want to oust the TMC first and then take on the BJP. The state, which once took pride in its secular ethos, is highly polarised today, courtesy the BJP and the ruling TMC.”

Bengal 2021 will be crucial for both parties. For the BJP, buoyed by its recent success in Bihar, a win in Bengal will complete its sweep of the East and Northeast, barring Odisha. Such an upset would be equivalent to Mamata dislodging the Left. And while it took her 27 years to do so, the BJP, if it wins, would have done it in 10. The party won no seats in the 2011 assembly election and only three in 2016. It was only in 2019, when it won 18 Lok Sabha seats in Bengal, that the BJP went from being a fringe player in the state’s politics to becoming the principal opposition party. For Mamata and the TMC, it will be a matter of survival. This keenly-contested election will be a landmark one in India’s political history.

(India Today Editor-in-Chief's note for the cover story, The Battle for Bengal, for November 30, 2020 issue of India Today Magazine)

Also read: Why I want freedom from TMC

#India today magazine, #Narendra Modi, #Mamata Banerjee, #Bengal2021
The views and opinions expressed in this article are those of the authors and do not necessarily reflect the official policy or position of DailyO.in or the India Today Group. The writers are solely responsible for any claims arising out of the contents of this article.