Is Mamata Banerjee inspired by the Modi wave to sign up Prashant Kishor?

The move by the West Bengal Chief Minister and the TMC to curb the saffron tide is indicative of a few things — the result was unexpected, one cannot bank on personal popularity alone and time-tested strategies may not be effective anymore.

Trinamool Congress has signed up Prashant Kishor as their political strategist for the 2021 assembly elections in West Bengal. That is a positive step. In a bid to counter the rising saffron tide, his appointment came after a longish meeting with the West Bengal Chief Minister, Mamata Banerjee. And, like all Trinamool decisions, this has come from her.

This is a comparatively better approach to the situation than what she did on the day of Eid al-Fitr. While addressing a crowd, she put the entire onus of her party's loss and BJP's gain on a brainless thing…you guessed it right, the EVM.

By now, every politician who blames the EVM for their electoral debacle knows the real and exact cause of their defeat, and yet chooses an ostrich-like approach, such as this, instead. Why? In Mamata’s case, it could probably be the shock factor or the margin of defeat, or just an excuse. Whenever a leader holds the EVM responsible they are just questioning the ability of the voter to choose wisely. In an indirect way, they question the right of universal adult franchise. EVM is just the proxy for voters. Criticising the voter directly is a fail-proof recipe for disaster. The public rarely forgets or forgives 'public' badmouthing.

It is some two years to the next assembly polls in the state and Mamata Didi is moving in the right direction. She has roped in India's best-known political strategist and that in itself is indicative of a few things — the result was unexpected, she is no longer secure in banking on personal popularity alone and that she is not entirely sure if the time-tested strategies are effective enough.

She recognises the need to change the course of action, to re-strategise, focus and unlearns. That will be required, as it will be difficult for her to counter BJP by muscle power or development alone. The defections will continue. They will demonstrate a whole lot of things such as the true extent of her popularity, the loyalty of her party people, the lack of purchasing power parity and that her party was built brick-by-brick by her ex-associate turned bitter rival — Mukul Roy. Not only her, but this has also been quite the case across parties, post-Lok Sabha Elections 2019. Party after party has found out that their time-tested strategies have failed and that there is no readymade countre to the brand of politics that PM Narendra Modi preaches. The problem is that BJP under Modi has been extremely flexible in targeting regional agenda while keeping the base intact. The base itself is difficult to describe in a word — it is an eclectic mix. It has got elements of Hinduism, muscular nationalism, in-your-face patriotism, power projection — both soft and hard and one that exudes the 'ashmita' of a new, ambitious, aspiring, young Bharat.

Visits to temples and soft Hindutva won't stop it, talks of secularism will not defeat it. The cultural card does not work either and one wonders what happened to the countrywide, crippling 'farm distress'? Cycles for girl students, UN awards and 'Kanyashree' failed to stop it and invoking pro-Dalit sentiments did not help either. So parties, including Didi’s need to have a countre 'politics' against this idea of 'New India' or it will be curtains, for a long time.

It seems that the country has entered a new age of politics. From post-Independence to the Emergency era, it was mostly the benevolent, Indian-socialism of Jawaharlal Nehru. After the Emergency era, came the reformist movements, followed by another stint of Congress-brand welfare socialism. Then the Mandal Commission report came and caste identity politics dominated the landscape since the 90s till 2014. 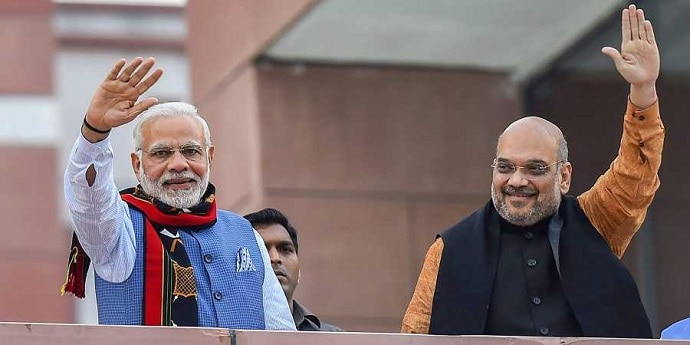 With the results of the Lok Sabha elections 2019, we may be seeing the dawn of a new age of politics. One of hard-working, clean images, muscular patriotism, proactive assertiveness of 'Bharatiya ashmita.' We shall have to wait for actual caste-based voting patterns to emerge. Probably they will show substantial change from the caste-based patterns that most of North India was used to witnessing.

Distribution of votes along religious lines should be interesting too. Other parties must catch up to the idea of this New India. However, it will be an entirely different issue if this New India has found their new leader. Welcome to a brave new world.

#Trinamool, #NITI Aayog, #Narendra Modi, #Prashant Kishor
The views and opinions expressed in this article are those of the authors and do not necessarily reflect the official policy or position of DailyO.in or the India Today Group. The writers are solely responsible for any claims arising out of the contents of this article.