What will happen to rural Bengal when all big politicians leave?

The virus is now being taken to rural Bengal via helicopters and rally Raths.

When I landed in Bagdogra two weeks ago, the atmosphere was calm; the people at the airport, masked, but their eyes reflected a certain kind of peace. It looked like we had sailed over the worst. That day, just 150 kilometres from the Bagdogra airport, PM Narendra Modi was addressing a massive public meeting at the Rash Mela Ground in Cooch Behar. The ground was packed to the brim. Some curious spectators also scaled trees and got themselves a seat on a branch or two to catch a glimpse of the man at the forefront of Bengal's 2021 war. The crowd chanted Jai Shri Ram. The Prime Minister wiped the 41-degree April sweat off his face and began speaking to them. Someone also fainted somewhere in this sea of people. The PM stopped his speech to ask the medics to attend to the person. PM Narendra Modi's rallies in Bengal have been packed to the brim. (Photo: Twitter/@narendramodi)

Over the past 13 days, the scene in the country has gone from triumph to defeat. Hospitals have run out of beds. Oxygen is scarce. The healthcare infrastructure of the country is struggling hard to keep pace with the raging virus, but all of us know it's not enough. Headlines from Delhi, Lucknow, Mumbai, Bhopal; photos of pyres and graveyards have been gnawing at our insides for a week now. But you know what seems unaffected by this dance of death? Election rallies in Bengal.

Even as I'm writing this, all parties contesting elections have multiple roadshows scheduled across Bengal. Or what remains of Bengal after five phases of elections. The BJP's strength is in its show of manpower. And what a show it has been. From Cooch Behar, the last district in Bengal, to Nandigram, which sees a big fight, Assembly constituencies have seen rally after rally and innumerable people. Most of the politicians who campaigned in places far from an airport preferred reaching the ground in a helicopter before boarding the Rath to take to their public meetings. One glimpse at Social Media profiles of ticket-holders in Bengal will show you no one has a mask - no, not even while shaking hands with the crowd. Social distancing is an alien concept in India anyway. There are the honourable exceptions, of course.

It is said the BJP enters a tournament to win it. It wins. The party and its karyakartas don't stop to breathe. They are relentless in their pursuit of winning. So they entered Bengal in 2021. They have only one motto: to win. Didi O Didi needs to go - that's all. Double-Engine ki Sarkar will rule the Centre and the state and all will be taken care of. But at what cost? 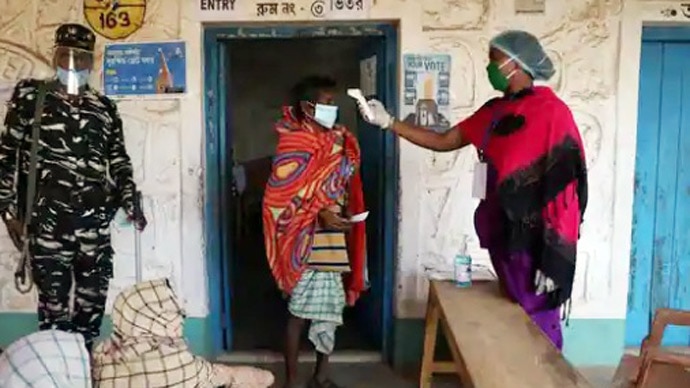 How is West Bengal going to cope with the Second Wave? (Photo: Reuters)

The Mamata Banerjee-led government in Kolkata has been urging the Centre to stop election rallies in Bengal. Now 'practise what you preach' is an adage best suited for sermons from the Mount of Beatitudes. Take Banerjee herself, for example. A tweet from Derek O'Brien declared today that the Chief Minister is suspending all her rallies in Kolkata and restricting others to 30 minutes. Why, do other places in Bengal not deserve the same Covid-safety protocols? Does the virus spread only from the 31st minute?

Mamata Banerjee will NOT campaign in Kolkata anymore. Only one ‘symbolic’ meeting on the last day of campaigning in the city on April 26. Slashes time for all her election rallies in all districts. Restricted to just 30 minutes. #BengalElection2021 #Covid

The virus is now being taken to rural Bengal via helicopters and rally Raths. How is the state going to cope with the Second Wave? Especially after the horrors of 2020? Ask Banerjee, and she will point a finger at the Centre. Ask the Centre, and they will point that finger right back at the state. And in this fight between heavyweights, it will, once again, be the have-nots who are trampled upon.

The other player in this triumvirate at the helm of the Bengal Battle is the CPI(M)-Congress. The CPI(M) took a moral high ground just last week when it announced they were stopping all large election rallies. By the time you finished reading their words, there was a rally in Nadia on April 17 where the word 'large' needed redefining.

The CPI(M) took a moral high-ground by announcing that it would not organise large rallies due to the surge in COVID-19 cases. This is Minakshi Mukherjee’s rally in Palashipara in Nadia on Saturday. pic.twitter.com/M12b4YSsAG

The Election Commission has now intervened. It has asked for all election rallies in Bengal to be stopped from 10 pm to 7 am. Don't ask who holds, and who attends, a rally during those hours. The answer is the same as the one to how night curfew can break the Corona chain.

In Bengal this election, the BJP is the most prominent player, with TMC coming a close second. The battle has been neck-to-neck but the helicopter-watchers have mostly swayed to the Right rallies. The BJP's roadshows see people turning up in thousands, lakhs, come hell or high water. Or Corona, in the current day. There aren't enough tests. There are reports trickling in of laboratories refusing tests to Covid suspects. "Corona hi hoga" is the refrain when a test isn't available. Isolate at home; get your medical consultation over the internet; in all probability, you won't be lucky enough to get a hospital bed so why bother. A saffron-clad seer from Kumbh also called 'Mrityu - Death' the ultimate destination the other day.

Does that day need to be today?

April 6 seems months ago. There is a slight change in the (lack of) reverence for Corona among people in this part of Bengal today. The masks are back even though most of them are used as chinstraps and people pull them down to talk to others. There is vaccine hesitancy, but there is also conversation about taking the jab. Everyone knows what their nearest hospital looks like. If there is one near them, that is.

The rallies have been unchanged these two weeks. The venues have moved from North to South but suburban Bengal is still turning out in large numbers to see the people from Delhi and Kolkata. A few metres above them all, Death smirks, rehearsing its steps.