So long as such corrupt and coercive systems are in place, development in the state will continue to hit the wall.

From emergency meetings in the Trinamool Congress (TMC) offices to keeping mum on the syndicate expose on instructions from senior party leaders, the TV Today sting operation has emerged — an investigation that revealed the shocking connivance of the party and government officials with notorious syndicates — as not just another eye-opener, but has also left the Mamata Banerjee-led party searching for reasons to save loss of face.

TMC leaders, some of whom are involved in the “syndicates” that keep a check on the supply of government contracts and construction related work, called for emergency meetings in the North 24 Parganas and Dum Dum area late at night, after the TV Today network exposed the presence of what PM Modi recently, during his visit to the state of West Bengal, called a “Syndicate Raj”.

In the exposé, the TV Today network found that patronised by TMC councillors, members and government officials, these syndicates have spread their tentacles from real estate to Durga Pujas. These groups control sale of land, construction and building material — and if the buyer seeks legitimate means, the syndicates make sure he succumbs to their demands.

During the sting operation conducted by two India Today journalists over several days, a councillor, the husband of another councillor, a TMC member, an official and a syndicate operative were caught right on camera mentioning how the whole system works, and how "protection money" is extorted from businessmen.

“If you protest, it will lead to a bigger problem and vandalism. They are very dangerous people. Their boss is a very big leader of West Bengal. He might become an MLA. He will have everything vandalised. Lockdown or shell out Rs 10 lakh,” Soumen Banerjee, husband of Bidhannagar TMC councillor Swati Banerjee, blatantly mentions to an India Today TV undercover reporter posing as a businessman. The pretext of the meeting, opening a "restaurant"; the question, why police doesn’t intervene; and the answer, the "muscle power" these syndicates command.

Banerjee was caught on camera along with a syndicate operative named Rana Basu demanding more than Rs four lakh from the reporter. “I told you that you have to pay up only once. He [Rana] will conduct Durga Puja in some other ward, not mine. Just see to it. That's it. Give him Rs 25,000 and close this discussion.”

“It is all in the family,” the undercover reporter is told when he sought to speak directly to Swati Banerjee. Her husband is seen saying, “What will she do? You spoke to me. That's equally good.”

These syndicates rely on simple coercive policies like “pay up or suffer the consequences” — a kind of unspoken law of the jungle in West Bengal.

And the malaise is widespread. 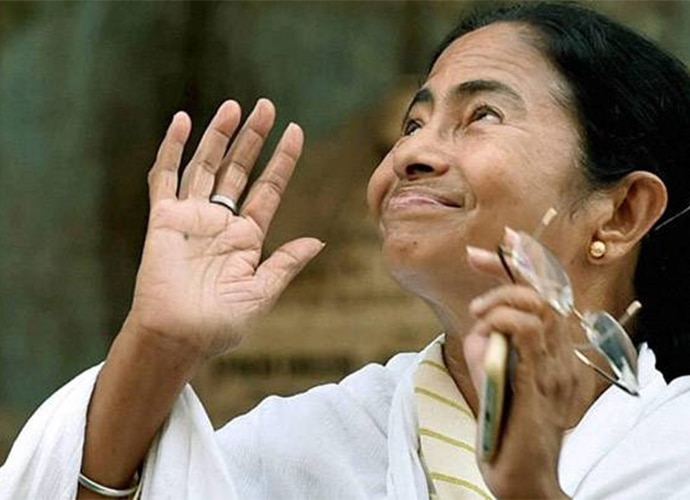 Patronised by TMC councillors, members and government officials, these syndicates have spread their tentacles from real estate to Durga Pujas. (Photo: Indiatoday.in)

TMC worker Sushanto Das was caught on camera boasting how “the party is all ours. All leaders are with us”. A close aide of North Dum Dum’s TMC councillor Bidhan Biswas, a threatening Das says, “If someone buys land via others, we will cause ruckus.”

Das, who openly admitted to being a TMC member, further boasted that, “[North Dum Dum] is our area. We manage everything — from the chairman, to the councillors to building plans. You don’t have to worry about anything,” when he was asked by one of the undercover reporters about the purchase of land, and whether it has to be done with his blessings.

As can be seen in the sting, these syndicates don’t operate out of seedy underground dens. In fact, they do so brazenly and with official connivance.

Party seniors have allegedly instructed those involved to lie low and stay away from the public glare, for the time being, at least. They have also been told to not speak about this, to the media or otherwise.

Nirmal Ghosh, a TMC MLA from Panihati in North 24 Parganas district defended the party, saying: "Our party chief has announced that nobody from the party should be involved with syndicate — be it local or central syndicate, we don't believe it and wherever there is a complaint we go through it and take necessary action."

Bharatiya Janata Party (BJP) vice president Chandra Kumar Bose, speaking to TV Today about the exposé, said: “Syndicates existed in Bengal earlier as well, but in the unorganised sector. Now, they are in the organised sector. I had given credit to Mamata Banerjee for being Chief Minister of a syndicate raj, not of West Bengal.”

Bose added that not even TMC leaders are spared from the clutches of such syndicates. “My cousin Sugata Bose, who is a TMC MP from Jadavpur constituency, was attacked. My aunt Krishna Bose, who is 90 years old, was attacked. Her family was threatened and was told that they could not repair their house unless they bought building material from the syndicate. The TMC leaders are accepting [on camera] that there is syndicate raj,” said Bose.

CPI leader Dinesh Varshney said that if a corporator can be seen asking people how much money they are willing to offer, it clearly shows that a system of coercion is in place. “Anything which is done by force had political patronage,” he added.

Political analyst Somnath Singha Roy, however, dismissed the whole exposé and dubbed it as an attempt to “malign the TMC and put Mamata [Banerjee] down”, claiming that, the “people shown [in the India Today TV investigation] are not TMC leaders. Real estate brokers are everywhere in the world. What is new in this? What is the harm if some youths are supplying sand and bricks?”

The expose has left the entire TMC leadership red-faced. The sufferers, of course, are the people of West Bengal who intend to work for the development of the state in various sectors. So long as this Syndicate Raj is in place, development in the state will continue to hit the wall.

#Syndicate raj, #Mamata Banerjee, #West Bengal, #Trinamool Congress
The views and opinions expressed in this article are those of the authors and do not necessarily reflect the official policy or position of DailyO.in or the India Today Group. The writers are solely responsible for any claims arising out of the contents of this article.