This article has been co-authored by Amitabh Tiwari and Debdutta Bhattacharjee.

There is no denying the fact that Mamata Banerjee remains unchallenged in West Bengal, having romped home in style in the 2016 Assembly elections, winning a mammoth 211 out of 294 seats, with 45 per cent vote share.

But more than an election that she won, was it one that the opposition lost? The Left-Congress alliance failed to do to Mamata what the mahagathbandhan could to Narendra Modi-Amit Shah in Bihar. It promised much, but delivered precious little, bagging a pathetic 76 seats and just 38 per cent vote share.

Mamata's victory is being hailed as a victory of her social sector intervention and the populist schemes seeking to woo rural voters, but frankly, the contest was expected to be much closer than it turned out to be in the end. Though the consensus was that Mamata would get a second term, there was a fair degree of scepticism when Axis My India and Today's Chanakya predicted 200-plus seats for the Trinamool Congress (TMC) - the former projecting a massive 233-253 seats for the TMC. People were somehow inclined to believe the C-Voter and AC Nielsen surveys more that predicted 167 and 163 seats respectively for the TMC.

There was no massive wave in favour of Mamata this time around unlike in 2011, when the Singur and Nandigram agitations and a state groaning under years of Left misrule wanted "poriborton" (change). In fact, Mamata had a lot to contend with this time around - Saradha, Narada, bridge collapse, abysmal infrastructure, syndicate and goonda raj et al. Her tenure has been hit by allegations of corruption and misgovernance.

Yet, she was able to sweep the elections, and for this she should thank the opposition, which handed the contest to her on a platter. Here is why:

The problem lay at the very outset. The Left and Congress fighting the elections together made for strange bedfellows. They had fought each other tooth and nail in West Bengal for ages. There are Left loyalists who would never vote for the Congress and vice versa. The Left and Congress has hardly any ideological commonality. The Left could ensure a seamless transfer of votes to Congress candidates. But the opposite didn't happen.

Moreover, the Left-Congress fighting each other in Kerala and dancing together in West Bengal didn't go down too well with the voters. They saw the alliance as opportunistic and desperate, but one that promised no healthy future, no matter how much CPI(M) general secretary Sitaram Yechury and Bengal Congress leader Adhir Ranjan Chowdhury tried to hardsell it.

People wouldn't have forgotten how the Left, which supported the Manmohan Singh-led Congress government at the Centre from outside, never hesitated to withdraw support on the issue of the India-US civil nuclear agreement in 2008.

People of West Bengal voted for stability, they did not want endless bickering between partners in a ruling coalition.

2. Alliance had arithmetic but lacked chemistry

Even if, for the sake of argument, we grant that the Left-Congress alliance had some merit, the leaders and workers of either side had no inclinaton to adapt, adjust or coordinate effectively. The Left-Congress combine enjoyed a similar vote share to the TMC in the 2014 Lok Sabha polls. Had they contested together they would have been leading in 95 Assembly constituencies as against 56 which they got contesting separately. In 2016, they failed to retain even these seats. It didn't help that Left Front chairman Biman Bose was cold towards the alliance from the very beginning. He said the Left had entered into only an "electoral understanding" with the Congress and that there was no "alliance" between them.

“In an attempt to prevent division of votes, we had asked all Left-minded and democratic parties to come together. Because the Congress is no longer an ally of the TMC, we welcome them. But there shall be no alliance with them. Their symbol is theirs, ours is ours,” Bose said.

While the leaders finalised the alliance it doesn't seem to have been accepted by grassroot workers. The Left and Congress cadres had a sense of distrust and hatred for each other, having fought each other for more than three decades and did not extend support to each other during campaigning, which cost the alliance dear.

Both parties were campaigning separately. Only during the fag end of campaign did Rahul Gandhi and Buddhadeb Bhattacharjee share the stage. Rahul as usual looked lost and kept on attacking Modi when BJP was not a factor in these polls.

3. Seamless transfer of votes between Left and Congress didn't happen

At the time of conceptualisation itself, there was a problem with the alliance. While the Left voter was anti-Mamata, the Congress voter was anti-Left. The Left could ensure a seamless transfer of votes to Congress candidates. But the opposite didn't happen. 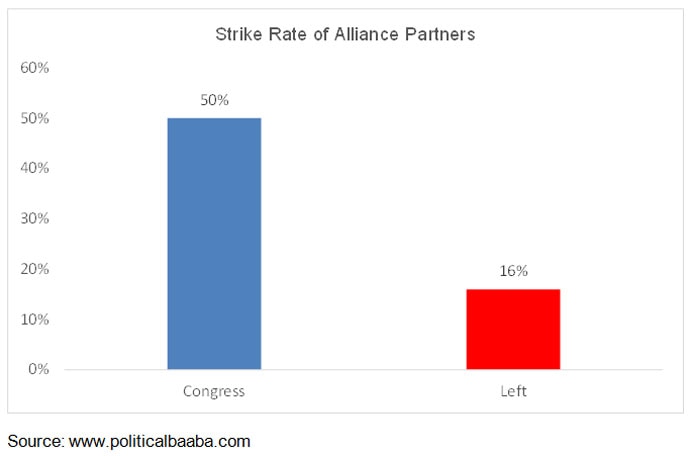 This is visible in the results with the Congress bagging more seats than the Left (44 vs 32). In fact, there were strong rumours that the Congress would go back to Mamata in case of a hung Assembly which also impacted the alliance's performance.

Mamata enjoyed a clear 20 per cent advantage in popularity ratings over CPI(M) state secretary Suryakanta Mishra, who was leading the Left's charge in the state. In recent times, there have not been an election where the party with the most popular leader has lost. Mamata, younger to Mishra, also appealed to the youth. Mishra, expectedly, lost his own seat in these elections. 5. Left seen as fading ideology and Congress clearly on decline

The Left was considered by many to have been stuck in a time warp in terms of their ideology and policies. The old guard still calls the shots at Alimuddin Street (CPIM headquarters in Kolkata), and younger leaders have hardly come up. The average age of candidates was way above 45.

The Congress, on the other hand, given the many episodes of corruption during the UPA-2 regime at the Centre, was considered to be steeped in corruption, at least by the urban middle class. Also Rahul Gandhi's leadership evoked no confidence.

There are no local stalwarts for either the Left or the Congress now after Buddhadeb Bhattacharjee and Mamata herself (who had broken away from the Congress).

The Narada tapes that showed several TMC leaders accepting or agreeing to take bribes came too late in the day when they were released just before the polls. Mamata and the TMC aggressively portrayed them as mischievous, which possibly the people believed, given the timing of the release.

Moreover, in any case, rural Bengal factored in Mamata's development efforts like Kanyashree, Yuvashree, Sabuj Sathi and so on, and Narada, Saradha etc didn't feature on top of its reckoning. The urban middle class in the state, on the other hand, though fed up with allegations of corruption and misgovernance, found no alternative and hence, voted for the TMC. As a result, we saw all the 11 seats in Kolkata, for instance, going to the TMC.

That the Narada sting operations did not have much of an impact was visible with five of the six TMC candidates caught in the tapes winning their seats. These candidates were Suvendu Adhikari, Firhad Hakim (of the "mini-Pakistan" infamy), Subrata Mukherjee, Sovan Chatterjee and Iqbal Ahmed.

With a lacklustre leadership, the alliance could not take advantage when Mamata was evidently weak, when prominent leaders of her party were being pounded by the CBI over Saradha, and she was on the backfoot, losing her cool and decency on numerous occasions, or when the Narada tapes were released and the flyover collapsed in March killing over 20 people. They failed to target Mamata enough on the corruption issue.

Had Mamata been in the opposition, and the allegations of corruption were against the Left-Congress, one could imagine how she would have brought Kolkata to a standstill with her protests, bandhs, dharnas and gheraos. The Left-Congress didn't have a natural agitator in their ranks as Mamata, which saw them letting their chance go a begging. In fact, this capacity of Mamata to agitate paid her rich dividends before the last elections during the Singur and Nandigram land movements.

The alliance failed to project itself as the saviour of the Muslim community. Muslims influence outcome in 102 seats in West Bengal. The Congress-Left which was leading in 63 of these seats in the Lok Sabha polls won only 41 seats in 2016. According to the Axis and Chanakya opinion polls, the Left-Congress combine lost 22 per cent and 13 per cent support respectively amongst Muslims. 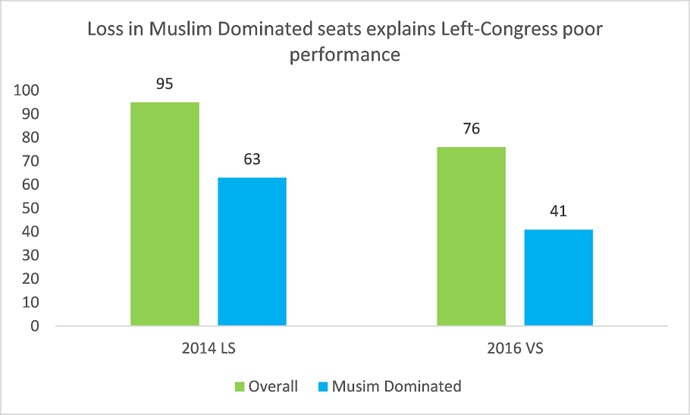 The alliance failed to project the Mamata-BJP link and how the BJP government went slow with the Saradha scam investigations, clearly in order to enlist Mamata's support in Rajya Sabha. After the polls, Prime Minister Modi called Mamata to congratulate her and she reciprocated by announcing her support to the GST Bill.

9. TINA (there is no alternative) factor

West Bengal was reeling under Left rule for 34 years. Mamata came as a refreshing alternative. While only 40 per cent rated her government's performance as good, according to the Chanakya exit poll, and 48 per cent average and poor, she was able to play the five years versus 34 years card well. The majority of the voters didn't want to go back to the dark ages of Left rule. They saw Congress as corrupt and were generally miffed by the alliance, which backfired on the Left and Congress (in fact, more on the Left than Congress)

The BJP, on the other hand, remained a Hindi heartland party, which the average Bengali voter could not relate to. It could not project a robust Bengali face as its leader and was considered not ready. Hence, there was no alternative for the Bengal voter than supporting Mamata.

10. Failure to grasp the BJP's slippage in votes

It was amply clear that the BJP got 17 per cent votes in the Lok Sabha owing to the Modi factor and they will lose three-seven per cent vote share in the Assembly polls. While it is commonly believed that the increase in BJP's votes was from the Mamata camp, it was not true.

The BJP equally pulled a lot of votes from the Left across urban, educated, upper caste and youth voters. While Mamata was able to get these back, the Left-Congress combine couldn't. So the entire loss of six per cent vote share of the BJP has swung to Mamata, increasing her vote share from 40-45 per cent.

With this poor show, the Left-Congress alliance is likely to be called off now. With the LDF beating the UDF comprehensively in Kerala, this block's importance in the CPM Politburo will increase. It never favoured this alliance anyway.

The poor show was mainly owing to strategic errors and lapses committed on the part of both partners. Could the Left have done better without the Congress? Yes. The Congress appears to be the biggest beneficiary of this alliance. It is set to bag the Leader of Opposition chair in the West Bengal Assembly. However, it has made a blunder of pushing the TMC into BJP's lap in terms of the national political scene.

#Elections 2016, #Left Front, #Mamata Banerjee, #West Bengal polls
The views and opinions expressed in this article are those of the authors and do not necessarily reflect the official policy or position of DailyO.in or the India Today Group. The writers are solely responsible for any claims arising out of the contents of this article.