From Left-Congress alliance to Mamata-Modi rumours, here's the low-down on elections in one of the most populous states.

It's poll time in four states and one union territory but only one, West Bengal, has elections spread out over seven dates and six phases (the others are in one or two phases). This should be sufficient to indicate how complicated the polls will be in one of the most populous states.

The overview is that a Left (CPM and CPI) and Congress alliance (referred to in the state as the "jot") is battling it out with the TMC, with the BJP trying to get a foot in. Here’s the fine print in five points:

The north is where Congress and CPM have a chance of faring well, post their alliance. In many Vidhan Sabha constituencies here, Trinamool has been seen to be the third party, as per vote share, in the Lok Sabha polls just two years back. However, an overwhelming majority of Vidhan Sabha seats are in south Bengal (218 out of 295, nearly 74 per cent) where Trinamool has a stranglehold. Hence, this imbalance may lead to the "jot" winning a high percentage of votes, but not a proportionate number of seats. 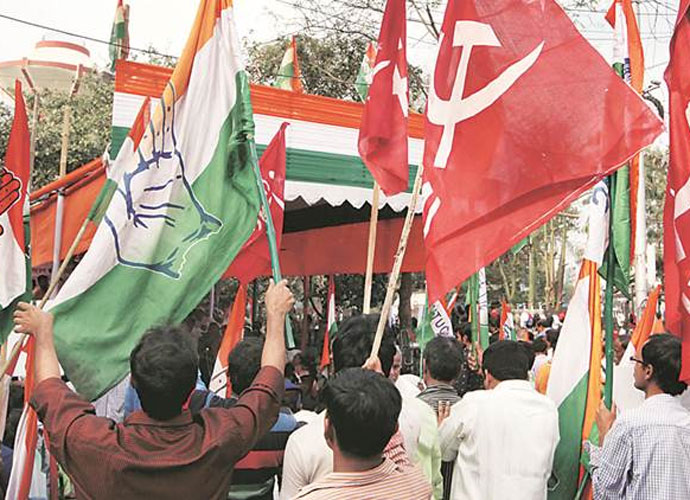 Congress and CPM have a chance of faring well in north Bengal.

Some figures from the 2014 Lok Sabha elections serve as indicators:

Even if we assume all the Left and Congress votes won’t transfer to the alliance, it is likely to win the lion’s share of votes and seats in this part of the state. Sadly for them, even if they win every seat in North Bengal, they will have won a little more than 25 per cent of the Vidhan Sabha seats.

While the TMC, the BJP and the Left had its votes more or less evenly distributed between north and south Bengal, this wasn’t true for the Congress. With a mere 5 per cent of votes in south Bengal, it takes the combined Left-Congress voteshare up to only 36 per cent even if we assume every vote for either party will transfer to the alliance in 2016.

The black swan in this arithmetic could be the BJP votes. Its dismal show at the West Bengal municipal polls, as well as the fading of the Modi wave in the Delhi and Bihar elections last year, suggest that the BJP may have lost many West Bengal voters. If these votes go to the TMC, the party could give the "jot" a run for its money, even in north Bengal, and sweep back into power. If they go to the Left-Congress alliance, however, Didi may be in for a rude shock.

If the state vote for BJP in 2014 was along communal lines, it is likely to stay firmly with the saffron party or transfer mostly to the Left-Congress alliance as a reaction to TMC’s minority appeasement measures. On the other hand, if these were votes for development - which in West Bengal is more likely - how they will be redistributed between the big two contenders is anyone’s guess.

Why does TMC hold sway over south Bengal? One reason is the amount of welfare spending by the government, especially in rural Bengal. A lot of this has come from the Centre too but chief minister Mamata Banerjee has made sure it has been relayed to the people.

MGNREGA funds have been utilised to give people work and pay, and also to build and augment water reservoirs and roads. Schools, hospitals and healthcare centres have sprung up where they weren’t available. Didi has borrowed from chief ministers like Bihar’s Nitish Kumar not just immediate ideas like cycles for female students but the larger vision of providing sadak, bijli and paani (roads, electricity and water) to areas that need these. Mamata Banerjee has made sure welfare has reached rural areas.

Two popular welfare schemes are the Kanyashree (by which a family with a girl child gets Rs 25,000 upon completing higher secondary school) and rice at Rs 2 per kg for families below the poverty line. By one estimate, the latter covers more than 7 crores of West Bengal’s 9.25 crore population.

The credit for the implementation of many of these schemes goes to Subrata Mukherjee, Banerjee’s health and rural development minister with years of grass roots experience.

While the Left and Congress is questioning TMC on transference issues - such as people’s names falling off BPL lists and faults in the cycles the students have been given - they haven’t been able to project a powerful alternative welfare vision. This, despite the fact that rice at Rs 2 per kg was originally a scheme initiated by West Bengal’s Left government and then institutionalised by UPA-2’s Right To Food.

Their primary campaign planks seem to comprise a "return of democracy" (in universities and the legislature and to prevent rigging during polls) and the need for "industrialisation".

The second reason why TMC controls south Bengal? It’s cadre in the state. To understand how Banerjee has rooted this cadre in a structure, observe how hundreds of crores were given by her government to TMC supporters to begin sports clubs, which now act as nodal centres for the TMC machinery during polls.

3. From Narada to Saradha

What about the Narada scam? The Kolkata bridge collapse? These seem more likely to affect the TMC’s chances in urban Bengal. But rural Bengal decides the government of the day, and here, as long as people are satisfied with the government’s delivery on welfare fronts, it seems unlikely that corruption will be a major issue. But another reason for these issues not hurting TMC is the inability of the opposition to make them do so. Imagine what would have come to pass if Didi had been in opposition when news of the Narada Scam and the Kolkata Bridge Collapse broke out. She would have gheraoed the chief minister’s office. Her cadres would have brought the city to a halt till the government acted.

Even without cadre, Banerjee had braved being beaten up or arrested innumerable times so that issues she raised spread across the state and even the nation. The Left and Congress haven’t shown as much resolve.

The first phase of polling has been plagued with bad news. Micro observers haven’t gone/been allowed into sensitive areas, EVMs have stopped working, one had a window open next to it so people could see who was voting for whom, politicians and policemen suspected of bias have entered booths and there have been instances of violence.

This has led to the transfer of key police personnel throughout the state. 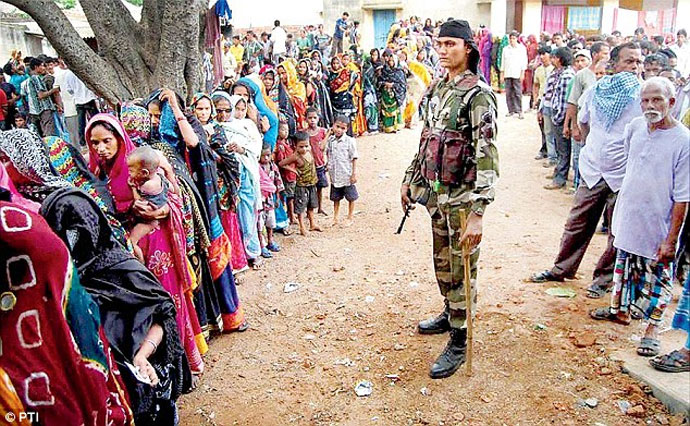 First phase of polling has been plagued by some instances of violence.

However, these reports by themselves don’t seem to suggest one party will be able to game the polls. What is more worrying is news from villages that known supporters of one party or another are being told to leave town (some voters’ houses have been set on fire) or stay at home on polling day. Basically, to not cast their votes at all.

If they do they will be subject to violence and harassment not just immediately, but throughout the year. This harassment, over and above direct violence, amounts to being cut off from basics - such as water or electricity - by local satraps.

In such scenarios, those with the most clout - official influence and party cadre - in an area call the shots. The TMC has clout in south Bengal. The Left-Congress combine in North Bengal.

Most reports say the Left-Congress alliance is working well in the state and is likely to benefit from a high transference of votes. Instead of a "top-down" approach, where leaders at the top shook hands and declared an alliance their party workers had to adjust to, this alliance was "silent" for a long while. This led to the cadres coming together for protests first.

Then, after the cadres seemed willing to work together, was the alliance officialised. Also, this alliance was piloted in a way, in October last year, during the Siliguri municipal polls. The CPM and Congress understanding, then, had assured them a victory, inspiring them to think bigger. 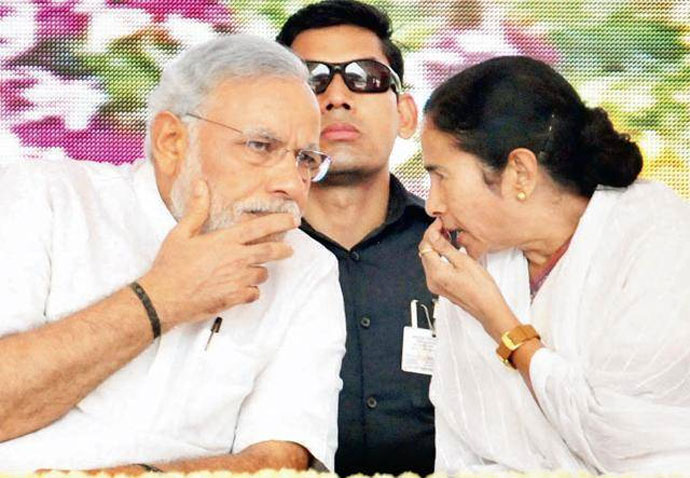 There are rumours of an alliance between Modi’s BJP and Banerjee’s TMC.

There are rumours of another alliance, which remains silent. One between the Centre and the state - between Narendra Modi’s BJP and Banerjee’s TMC. There are speculations that the more BJP campaigns in the state, the more the minority vote gets polarised in favour of TMC (it is believed that minorities will vote for the party most likely to defeat BJP).

These rumours have been fuelled after the first phase - by the fact that the Election Commission and central forces were unable to prevent violence in some places. Also, by reports of a spurt in the number of RSS shakhas throughout the state, which one would have expected TMC cadres to prevent normally.

Why would the BJP want the TMC to sweep the state? Because, say the rumour-mongers, it can negotiate with it, as opposed to the Left or the Congress. The BJP, they claim, could ask the TMC to back them in the Rajya Sabha, in exchange for the Centre going easy on the state in cases such as those pertaining to the Saradha scam.

The fact that the TMC has allied with the NDA before adds to these speculations. Also, there is little chance that TMC will become a national contender, just as the BJP has little chance of forming a government in West Bengal. So an alliance, albeit a silent one, would be beneficial to both.

#Left parties, #Mamata Banerjee, #Trinamool Congress, #West Bengal polls
The views and opinions expressed in this article are those of the authors and do not necessarily reflect the official policy or position of DailyO.in or the India Today Group. The writers are solely responsible for any claims arising out of the contents of this article.