Understanding the bias of the western media in covering Delhi violence

Foreign media rarely analyse why an overwhelming majority of India’s 200 million Muslims don’t want to settle in a Muslim-majority country.

There has been an unprecedented torrent of international criticism of the Narendra Modi government over the Delhi riots.

Britain’s Left-leaning The Guardian was incensed: “The immediate causes of events are the fallout from Narendra Modi’s unjust Citizenship (Amendment) Act, the dangerous rhetoric employed by the ruling Bharatiya Janata Party in Delhi’s city elections this month, and the mob incitement by BJP leaders like Kapil Mishra, to violently remove a group of Muslims who were blocking a road in the capital’s north-west to protest against the legislation.”

The Wall Street Journal’s three correspondents — all of the Indian origin — reported: “(Intelligence Bureau officer) Ankit Sharma was returning home when a group of rioters started throwing stones and charged into the street near where his house is located, his brother said.” WSJ then reportedly quoted Sharma’s brother Ankur Sharma: “They came armed with stones, rods, knives and even swords; they shouted ‘Jai Shri Ram’...” 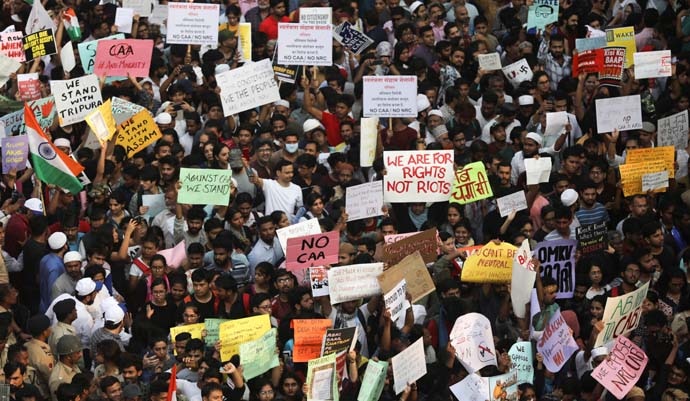 Most international journalists clearly haven’t either read the Citizenship (Amendment) Act or haven’t understood it. (Photo of protests: Reuters)

Let’s break down the facts. Most international journalists clearly haven’t either read the Citizenship (Amendment) Act (CAA) or haven’t understood it. The fault though lies at least partially with the Indian government. It phrased the CAA with a dog-whistle paragraph that mentions six religions eligible for fast-track citizenship, leaving Islam out. The reason for Islam’s exclusion has been laboriously explained by the government — principally that a law aimed at stateless non-Muslim refugees from three Muslim-majority countries already living in India (pre-December 31, 2014) can’t obviously cover Muslims, Ahmadiyyas and Shias notwithstanding.

The CAA has nothing to do with existing Indian citizens, Muslim or non-Muslim. It has to do with non-Muslim refugees from abroad. The government’s intent though was always clear: To single out foreign Muslims from three neighbouring Islamic countries. And thereby send two domestic messages: One, to Indian Muslims; two, to Indian Hindus, the BJP’s voter base.

Matters now become more complicated. While the CAA is theoretically blameless, the sting in its tail is meant to right a perceived historical wrong. For 500 years, Hindus have quietly (and often not so quietly) watched as first Mughal invaders and then British colonists subjugated them. They were punitively taxed, suffered constant public humiliation, and had great violence inflicted upon them under both the Mughal and British Empires.

When freedom came, the Congress, in an attempt to unite a country wracked by communal riots during Partition, bent over backwards to appease Muslims who chose to stay behind in India. They were allowed to keep Sharia, their personal law, even as Hindu personal law was codified. The 80 per cent Hindu majority was too divided by caste, language and region to argue effectively that India was the only country in the world where the majority community was discriminated against in jobs and education while minorities were favoured.

Moderate Hindus are slow to anger. But after 200 years of Mughal depredations, when thousands of temples were destroyed, another 200 years of British colonialism when India’s economy was severely damaged, and finally after over 50 years of Congress governments that titled towards Muslim-first secularism, even moderate Hindus had had enough.

That is the pathology of Narendra Modi’s landslide victories in 2014 and 2019. Moderate Hindus, who in the past had voted for the Congress, saw in Modi a Hindu leader who would deliver to them the justice and respect that was their due in their own country and which had been denied them not only by both Muslim and Christian invaders but by their own post-Independence governing elite.

Can the foreign media, used to binaries and at sea with complex pathologies, be expected to understand all of this? That is why foreign newspapers and certain broadcasters can reveal naiveté and ignorance. Of course, these are not the only factors at work.

Foreign media rarely analyse why an overwhelming majority of India’s 200 million Muslims don’t want to settle in a Muslim-majority country. In India, they receive preferential educational quotas, personal Sharia laws (but not Muslim criminal laws which can get your hand chopped off for theft) and some would say the right to block arterial roads for months.

#Delhiriots, #The Guardian, #Caanrcprotest, #Wallstreetjournal
The views and opinions expressed in this article are those of the authors and do not necessarily reflect the official policy or position of DailyO.in or the India Today Group. The writers are solely responsible for any claims arising out of the contents of this article.