Pakistan had no intel about Balakot: How Pakistan is now amping up its surveillance

The strength of IAF and PAF can't be compared. But China's co-operation in upgrading JK-17 — a kind-of hybrid of MiG21 and F-16 — is significant.

When IAF jets entered the Pakistani airspace and reportedly destroyed a terror camp in Balakot on February 26, the Pakistani surveillance system did not have any inkling about it. Apparently, it exposed the chinks in the shiny armour of its ever-increasing defence budget.

What happened is this:

According to reports, Pakistan’s radars were jammed through the electronic warfare system the Indian jets were equipped with.

Also, the Balakot area which was attacked was in mountainous terrain — difficult for surveillance to operate in.

A former air force pilot said to Reuters that no radar works around the clock — so, decoy operations must have been conducted to figure out when the radars are on and off, and the jets must have flown really low to avoid the radar.

The Indian Air Force is the fourth largest air force in the world, following the US, Russia and China.

The Pakistani Air Force is the seventh largest.

‘How can one even compare the two?’ was a natural thread of discussion on social media.

But Pakistan started working on its existing radar system following the Balakot attack — and that’s significant. 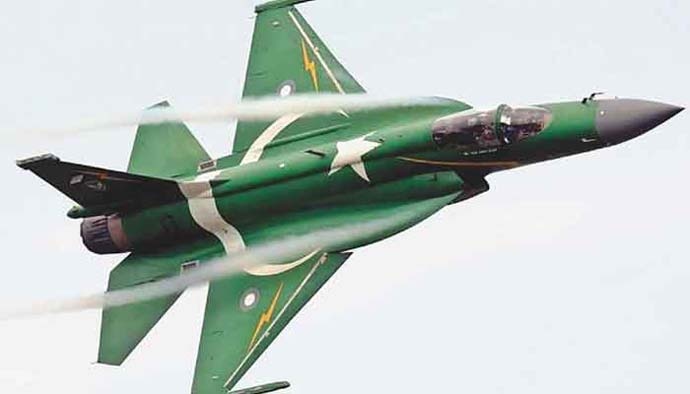 JF-17 was jointly developed by Pakistan and China. (Photo: Twitter)

According to reports and Pakistani media claims, during the air skirmish in which India’s MiG, flown by IAF captain Abhinandan Varthaman, was shot down, Pakistan used its JF-17. India, however, claimed that there was no JK-17. The IAF claimed that it had shot down Pakistan’s F-16.

All these claims and counter-claims aside, the JF-17 is up for major development — and China has confirmed that.

JF-17 was jointly developed by Pakistan and China. Close on the heels of the Balakot strike, JF-17 is expected to get advanced active electronically scanned array (AESA) radar and a helmet-mounted sight system, reports the Global Times.

Steering clear of technicalities, this radar would enable JF-17 to attack multiple targets — from long-range. The helmet-mounted sight system could allow pilots to aim at whatever they see.

According to Quwa, a defence news and analysis group, the Pakistan Air Force received advanced Erieye airborne early warning and control (AEW&C) radar equipment from the Swedish firm Saab at Chaklala’s base Nur Khan on April 9. These radar systems are expected to be installed on Pakistan’s Saab 2000 aircraft purchased last year.

Meanwhile, a number of Pakistani drones have been shot down along the International Border in Gujarat and Rajasthan post the Balakot strike, attempting to intrude apparently to have a better view of military installations.

Also Read: Yes, there is a Pakistan hand: What Pak did on the eve of the first day of Indian elections

Post your comment
#Pakistan air force, #Indian Air Force, #China, #Balakot air strike
The views and opinions expressed in this article are those of the authors and do not necessarily reflect the official policy or position of DailyO.in or the India Today Group. The writers are solely responsible for any claims arising out of the contents of this article.