The Japanese Prime Minister may have won a battle, but the war remains.

Shinzo Abe’s victory in the ruling Liberal Democratic Party’s internal election means that he can expect to head the government till the next election is due in late 2021, when he would have been the country’s longest serving prime minister.

In achieving his victory, Abe has overcome powerful headwinds, which include domestic political scandals, a persistently sluggish economy and an unpredictable Trump in the White House. New Delhi and Tokyo have a robust relationship. (Photo: Reuters)

Japan is an important economic and political partner of India. Its low-interest loans are invaluable for India’s infrastructure. They are helping connectivity projects across the country and their assistance in urban development schemes is transforming the landscape in Delhi, Mumbai and Chennai. New Delhi and Tokyo have a robust relationship across the Indo-Pacific and are collaborating on the Asia-Africa Growth Corridor to provide a high-quality alternative to the Belt and Road Initiative in the Indian Ocean Region. 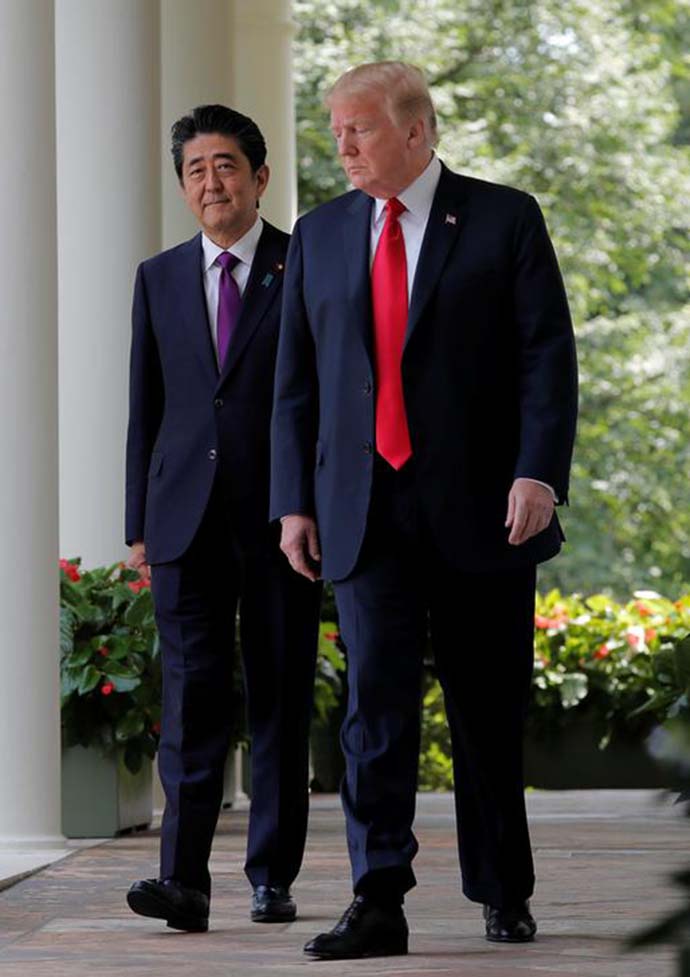 Abe has gone out of his way to work with Trump, but the latter has not quite reciprocated. (Photo: Reuters)

When Abe took office for the second time in 2012, the stagnant economy was Japan’s only major problem. He had declared that he had three arrows in his arsenal to fix it — monetary easing, fiscal stimulus and structural reforms.

Since then, in the face of rising problems with the US and China, Abe has achieved a great deal, but he needs to do much, much more to ensure that Japan can meet the economic and political challenges it confronts.

His expansionary economic strategy has brought back a measure of growth in the otherwise stagnant Japanese economy.

It may not be much by global standards, but it is the strongest since the 1990s.

He has used his office to push Japan’s security perimeter beyond the bounds to which it is confined by the constitution and he has initiated structural reforms aimed at raising the retirement age, scrapping tax rules that encourage women to keep away from the workforce and make the wealthy pay for their own health care.

The arrival of Donald Trump in the White House added a headache that need not have been there. Abe has gone out of his way to work with Trump, but the latter has not quite reciprocated.

In his dealings with North Korea, Trump has often ignored Japanese interests.

The US is extremely important to Japan as a trade partner and security provider. But the US has challenged Japan in both these areas.

Trump famously walked away from the patiently negotiated Trans-Pacific Partnership (TPP), which would have been greatly beneficial to Japan. Now, one of the short-term risks to the Japanese economy is the tariffs Trump has threatened to put on imported cars and car parts. Japan may have to make concessions to the US on this score and we may see some action when Trump meets Abe at the sidelines of the UNGA in New York this week. The Trump factor has encouraged Abe to reach out to China. (Photo: Reuters)

Abe needs some skillful footwork in dealing with his problems. On trade, he has joined 11 nations of the Pacific littoral to give life to an alternative to the TPP and, at the same time, has reached out to the EU to create one of the world’s largest liberalised trade zones. The Trump factor has encouraged Abe to reach out to both China and Russia. His October visit to China is expected to normalise ties between the two East Asian neighbours after a decade of tension.

Trump may have dampened the Japan-China tensions, but they are not going to go away so easily. But if Abe is able to successfully fire his third arrow to restructure the Japanese economy, it can have a transformative impact not only in Japan, but the rest of Asia as well.

Among his most difficult problems he still confronts are to find ways of dealing with Japan’s shrinking workforce. The Japanese are notoriously allergic to immigrants and at the same time, they are reluctant to allow women into their workforce. Yet, with its shrinking population, Japan desperately needs additional hands to power its economy. 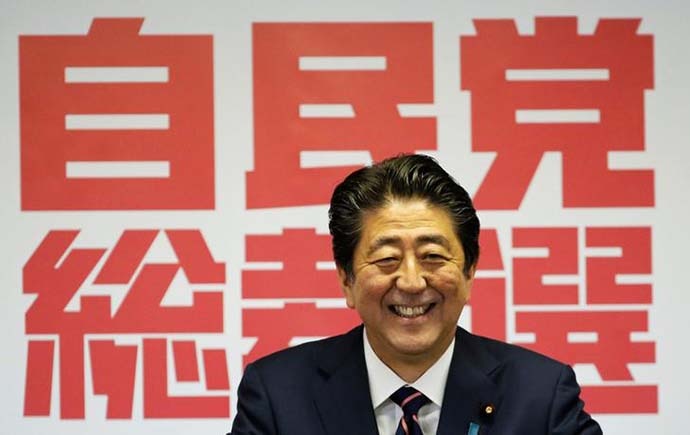 Abe must revise the Japanese constitution to make it clear that Japan’s military is legal. (Photo: Reuters)

A pledge to the Army

Another significant domestic issue is his pledge to revise the Japanese constitution to make it clear that Japan’s military is legal. Currently, Article 9 of the Constitution bars Japan from maintaining “land, sea and air forces, as well as other war potential”, though the country maintains de facto ‘Self Defence Forces’.

Neither of these two problems will be easy to resolve since there remains significant political resistance to change, especially that in relation to the pacifist Constitution.

#Bullet train, #Narendra Modi, #Japan, #Shinzo Abe
The views and opinions expressed in this article are those of the authors and do not necessarily reflect the official policy or position of DailyO.in or the India Today Group. The writers are solely responsible for any claims arising out of the contents of this article.