Japan knows India is the best possible regional counter-weight to a rising China. At the same time, it has to work with China to counter global uncertainties.

It is inevitable when there are back-to-back summits involving three key nations, that there will be comparisons. And so it is with the Modi-Abe summit of October 27-29 following the Xi-Abe meet of October 25-27. Given the already good relations between India and Japan, the China-Japan summit was the more consequential one.

It was long in coming — the last time a Chinese leader met his Japanese counterpart officially was in 2011.

Their meet at a multilateral forum in 2014 is noted for the photograph of the two grim leaders shaking hands briefly.

After the most recent meeting with Xi, Abe declared that the relations between the two countries were moving “from competition to co-existence.”

Xi, in turn, spoke about the importance of working together at a time of growing global “instability and uncertainties.”

There is little doubt that the policies of Donald Trump form the subtext of the meeting. From competition to co-existence... (Photo: Reuters)

Besides the usual declarations and photo-ops, the two sides also took some practical steps such as a $30 billion credit swap agreement and Japan’s de facto participation in the Belt and Road Initiative through 50 joint infrastructure projects.

Given the strong headwinds that China is facing in rolling out the BRI, Japanese participation could be a welcome means of finding the right balance. 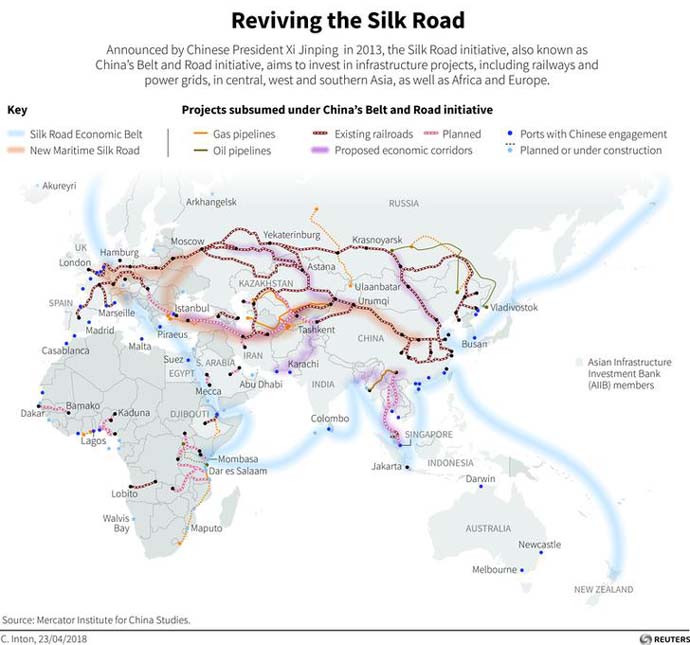 Japan is a de facto participant in the Belt and Road Initiative. (Photo: Reuters)

Japan has considerable experience in this area and remains a major player in what it calls the construction of “quality infrastructure.”

Participating in joint ventures with China is a good way for Japan to get more business for its own companies, even while providing a certain measure of stability in the tumult created by the trade stand-off between China and the US.

The process represents a workman-like approach to their ties, emphasising realism and self interest. Japan and other major exporting economies are not happy with the way China has done business, squeezing foreign companies for technology and closing off entire sectors of their economy.

But Japan and China also do business worth $350 billion in goods and services, and American policies, which could result in disrupting Chinese supply chains, could have a deeply negative impact on Japan. Japan is adjusting to the realities of the US policies. (Photo: Reuters)

All this does not mean that the Japanese are loosening their ties with the US.

What they are doing is to adjust to the realities of the US policies, especially in the trade front, where Washington simply wants to go it alone.

Tokyo underscored this by its tough posture in the South China Sea where in September Japan carried out drills involving not only its helicopter carrier, but also a submarine. The submarine later made a port call to Cam Ranh Bay in Vietnam. Another facet of the Japanese posture was visible in the Modi-Abe summit that immediately followed.

Abe’s approach to New Delhi is without doubt shaped by his belief that India represents the best possible regional counter-weight to a rising China.

He has gone that extra mile to befriend Modi, as evidenced by his invitation to the Indian Prime Minister to visit his vacation home.

This was Modi’s third trip to Japan and his 12th summit with Abe.

India and Japan agreed to join forces in promoting technologies such as 5G phones, robotics and AI, areas where Beijing’s quest for them have been generating global concern.

The approach would be to harness Japan’s hardware skills with India’s software prowess.

Japan’s agreement to cooperate with India on infrastructure projects in third countries like Sri Lanka, Myanmar and Bangladesh is useful for New Delhi to counter China.

By itself it lacks the resources and the expertise, so the partnership with Japan makes a critical difference.

Japan is already involved in developing infrastructure in the North-East in India. Japan has provided nearly $53 billion in total yen-denominated low interest loans to India.

The current visit saw an agreement for deeper cooperation between Japan and India in the naval sphere.

They are currently negotiating a bilateral acquisition and cross-servicing agreement to share supplies and services.

In November, the two sides will have their first army counter-terrorism joint exercise.

This remains a problem area for the two countries. Notwithstanding a great deal of activity through high-level visits and joint exercises, their defence cooperation is limited.

In part, this is because of the reticence of both players. But it is also an indication of their inability to work out a strategic framework for their ties.

While China may be the context of their security ties, it's not clear under what circumstances and contingencies they will cooperate. Japan remains comfortable in operating through its American alliance system, while India is chary of any alliance at all.

#China, #Japan, #Xi Jinping, #South Asia
The views and opinions expressed in this article are those of the authors and do not necessarily reflect the official policy or position of DailyO.in or the India Today Group. The writers are solely responsible for any claims arising out of the contents of this article.