When I caught up with Nirav Modi in London

My confronting Nirav Modi on a busy London street was the last video of him before he was arrested. What thoughts could he and Vijay Mallya be thinking now?

As I write this article, Nirav Modi will be spending the next seven nights in HMP Wandsworth prison of London (March 29).

The lead up to his preliminary hearing at the Westminster Magistrates Court on the 19th of March, where Nirav was remanded in custody, his bail rejected, has been nothing short of dramatic. Nirav Modi has kept a straight face so far. (Photo credit: The Telegraph)

During the proceedings, specially when the prosecution was making a case of fraud and embezzlement of close to 1.2 billion dollars, I turned my eyes on him.

He kept a straight face.

When defence tried to portray him as a normal person going about his life — paying taxes, having a National Insurance number, having a salaried job (20,000 pounds a month!), I looked at him. Nirav Modi again kept a straight face.

To apparently further emphasise the ‘good law-abiding' citizen aspect, Nirav's lawyers told us how he has reportedly been taking ‘educational courses’. I would have burst out laughing loud had I not firmly clutched my mouth. It was a reflex action I could not help. I looked at Nirav again. He kept a straight face.

Then arrived the moment of truth when the District Judge, Marie Mallon, said to Nirav, "I am granting custody because of the high value of amount involved in the allegation and you may have access to escape. I have substantial reason to believe that you may fail to surrender.”

I had anything but a straight face — my eyes popped out and my mouth dropped.

We journalists were totally taken aback by the judgment.

Bail is what we were expecting just like in Mr Vijay Mallya’s case — it took a moment to digest the decision. As I ran to tell the office about the phenomenal decision, all sorts of thoughts muddled through my head. How did this happen? What made the judge decide he is a ‘flight risk? What must be going on in Nirav’s mind?

From the posh and plush Centre Point penthouse to Wandsworth Prison? If this is what becoming one of the richest men of India with an estimated worth of 1.75 billion dollars takes, then it's not really a tempting proposition, I thought! From flying high to being deemed a flight risk! (Photo: PTI)

Looking at the likes of Mr Vijay Mallya, the face of ‘good times’, and Nirav Modi, the diamond kingpin, in the dock at court, is surreal. How have they ended up here? What must be going in their minds? Do they regret the decisions they made?

Questions like these made me ask Nirav Modi, while I was running after him on Oxford Circus, if he had ever contemplated never coming here — living a life seemingly of hiding and being tracked by journalists like this can’t be a great one?

The ’no comments' straight-faced Nirav’s face turned colour — he looked at me very sharply and said, “You are stalking me. Stop stalking me.”

Did I hit a nerve?

In the docks, when the judge rejected bail, Nirav must look back and revisit his entire life. Whatever be going in their minds, I can say with great comfort that the unpredictability, struggles and juggles that a life of a journalist mum brings, without much of riches or a page 3 existence, all seem far more attractive.

Yet my mind reminisces over the incidents in the corridors of the court while all of us wait for the court proceedings to start — I have attended every single Mallya hearing. Five case management hearings to 12 trial hearings, followed by the verdict on the 10th of December, 2018.

All through the wait in the corridors, Mr Mallya behaved like a perfect gentleman, often opening doors for us. His partner sat in the public lobby with us, quiet but keenly following everything that transpired in the court. Sometimes, she would walk to Mr Mallya’s lawyers and leave a note. Many a time during the trial, I could see Mr Mallya looking at her, possibly for assurance or just comfort. 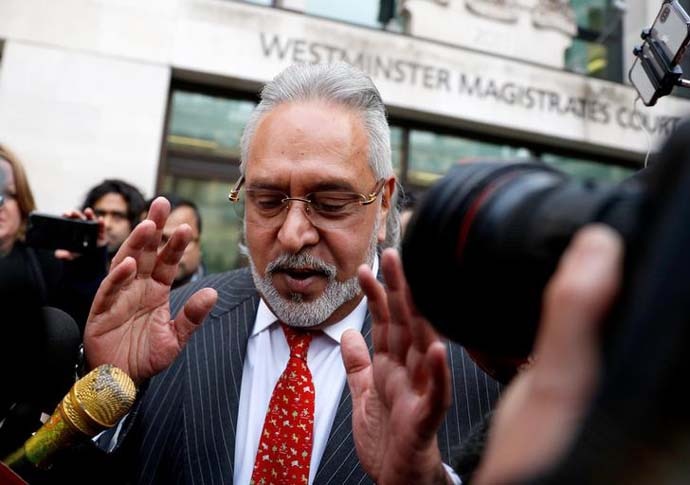 Vijay Mallya is the perfect gentleman in court. And outside it? (Photo: Reuters)

These are perfectly natural human reactions.

I have often found myself debating what reportedly made him not pay his employees for months — yet find it acceptable to tweet about the ‘lovely life’ in London. The Kingfisher Mallya Vs the Court Mallya — how do they co-exist?

In London, trying to resurrect his life, I met one of Mr Mallya's employees who was apparently not paid for months, yet hung on to his job because of the trust he had in him. A lot of the employees did that because they were sure Mr Mallya would not leave them high and dry.

There was no hesitation when he told me that Mr Mallya was by far the best employer he had worked for. The reason being — the employees felt heard and respected. Talking about an incident when Kingfisher reportedly clinched a big deal, the man said Mr Mallya made it a point to himself gift fine champagne to each one of his employee on board, saying, ‘I am going to have a good time today when I go home — you guys should do too.' Even as his business hit a rock, Mallya was known as the 'king of good times'. (Photo: India Today)

No one can change this and no one can dispute that when the Kingfisher ship sank, the captain was the first one to run.

As for Nirav Modi, he can run no more. Since he came to the UK in February 2018, Nirav has remained an enigma. Where is he staying? Is he in London or in Antwerp or any other part of Europe? Has he been travelling? What travel documents does he have? Is he here on a visa or does he have multiple passports?

Then came a string of claims. Some said they saw him in Mayfair — others claimed Nirav had changed his looks. The claims were many but the confirmations — none.

Then, on the 8th of March, Mick Brown from The Telegraph shot him walking down the streets of Oxford Circus.

An extradition request pending for months was soon passed by the Home Office and in no time, Westminster Magistrates Court issued an arrest warrant.

I can never forget the evening of the 18th of March.

Severely in need of coffee, in the wet, windy and cold London weather, I stood staring at every passing person’s face in Oxford Circus, hoping not to miss Nirav Modi. My legs almost gave up while the greed to get Nirav on camera did not allow me to give up.

I spotted him right in front of Tottenham Court Road station walking up to Centre Point, the posh building blocks where he rents a penthouse.

In a black jacket and white shirt, his recently acquired ‘Rajputi Mushtash’ gave it away. He spotted us too and walked straight ahead without turning into Center Point apartment block. I, totally forgetting about my bag which was kept on the floor, ran after him. He swiftly crossed the road and I madly continued to follow him, bringing the traffic to a halt. Whatever be the question, his answer remained ‘no comments’ — except to that one question I asked. When I caught up with Nirav Modi: I didn't know this would be the last video of him before he was put in custody. (Videograb)

Little did I know that this will be the last video of him before he was remanded in custody on the 19th of March. Just a day before Holi, a day that will possibly be etched in Nirav’s mind forever. So will be that one moment when he reportedly visited a bank in the Holborn area of London to open a bank account on the 18th of March. An Indian-origin bank employee apparently recognised him and contacted the police. The police came and arrested him. The bank, of course, refused to confirm or comment but the incident was discussed in the court.

Had he not gone to the bank, he might not have remained in custody from 18th March afternoon to 19th March till he was produced in the court. He would have appeared, as decided between the lawyers on the 25th of March, and would have at least avoided the embarrassment of police being called on him. Wonder if it is an embarrassment after all. How can simpletons like us fathom the mindset of such ‘achievers’!

As for the high-life of Nirav Modi, it is HMP Wandsworth Prison till the 29th of March when he appears in front of Emma Arbuthnot, the chief magistrate of Westminster Magistrates Court. She is the same astute judge who presided over the entire Mallya proceedings, impressed all of us with her razor-sharp mind, and ultimately ordered his extradition, without mincing any words about the clear existence of a 'prima facie' case.

#Diamond, #Nirav modi arrested, #Nirav Modi, #PNB fraud
The views and opinions expressed in this article are those of the authors and do not necessarily reflect the official policy or position of DailyO.in or the India Today Group. The writers are solely responsible for any claims arising out of the contents of this article.