Great Harappa of south India? How the Koya tribal museum is shattering 'Brahmins are supreme' myth

Kamaram has paved an exemplary path for cultural revolution in India.

In the first week of June (3rd to 5th), a revolution was initiated by Telangana’s Koya tibals with great futuristic vision in a deeply indigenous village called Kamaram (this is also known as Koyatoor) near Tadvai in Bhoopalpally district. They set up a museum to showcase all their historically innovated, technology, tools and methods of scientific use. They also gave space to the food varieties that they discovered, standardised, along with methods of burning, boiling and cooking (with oils and salt) meats, roots, fruits, leaves, fruits, grains (many unknown to the world even today).

Medicinal plants, roots and leaves were on display, along with the preparation techniques and processes. The technology used in the construction of homes, from the post-cave days to the present, along with the divine images they worshipped were shown to all of us who visited this indigenous exhibit of adivasi artisans, technocrats and doctors. Their musical instruments, water and food grain preservers, water usage methods during heavy rain, drought, summers and so on were displayed in well-designed forms. What we witnessed was a great knowledge museum that the Koya-educated youth had established with the help of villagers.

The makers of the museum

There are university-educated engineers and scientists among them now who have contributed to this collective effort. The display shows us the whole range of their agrarian instruments of seedling, planting and irrigation within the forests, the hillock productive zones that they themselves select, deforest, soil test and finally cultivate and produce for their food supplements in addition to those naturally available animal, bird, root, fruit and leave food resources.

Their fishing instruments, techniques, choice of locations and methods of cooking are outstanding. Though I was born and brought up in a shepherd community in the similar forest zone, my community does not know many of the diversified knowledge systems that Koya community of nearby (my village falls in the nearby Pakal lake forest zone) area villages. The Tadvai region falls in the same ecozone under another famous lake called Ramappa. 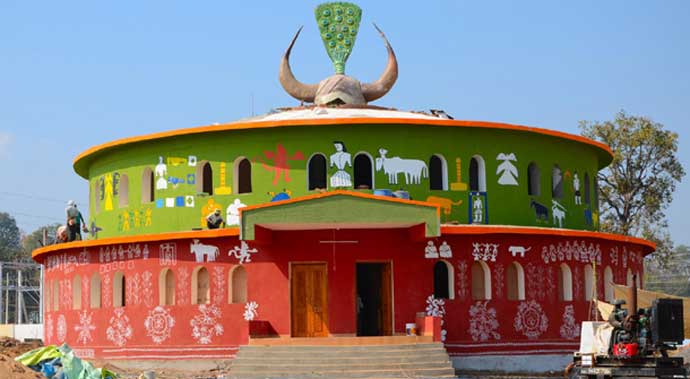 The Kakatiya rulers built three big tanks in the 13th century — Pakal, Ramappa and Lakdavaram. The largest Koya indigenous populations live in the Ramappa Lakdavaram lake zones. The name Ramappa definitely has something to do with “Harappa”, the ancient civilisation in the Indus river region that existed thousands of years before the Aryan migration — before the Sanskritic Aryan hegemony was established.

It must be mentioned that if Aryan Brahminism was indeed indigenous to India, its cultural roots would have been found in the life of the Koyas’ cultural and productive heritage.

But far from this, we could see only un-Aryan, anti-Brahminic civilisational production and distribution systems. Marital and cultural relationships between their men and women show there was no place for caste, or for “spiritual practices” like the Aryan Homam (fire sacrifice) and Namam (saffron tilak on the forehead).

The Koya culture is rooted in indigenous goddess/god images, who they believed could understand all languages. That is to say if they were familiar with English, they could pray to their God/Goddess in the language. Theirs is not an isolated, spiritual and cultural system like that of Brahmin-Banias. Besides being indigenous it is also a universalist and nationalist culture. This goes against the Rashtriya Swayamsevak Sangh’s nationalism of isolationism. It could be said that from the food they ate to the bed they slept in, their culture was national as well as international — entirely opposite to the Brahminic culture.

The seat of Southern Harappa

This rich civilisation of the Koyas was built on the banks of river Godavari. Kamaram is just a few kilometres away from the river — and the nearest big town, Eturunagaram, is located on its banks. This could have been the Southern Harappa built by Ramappa (Indo-Dravidian), a Koya man. The biggest lake in Telangana was built in the 13th century, perhaps in his name. Historically, “Appa” is used to refer to a father-like figure, much like the English word “Sir” and the Pali word “Ayya”.

In most South Indian languages, “Appa” and “Ayya” are used to denote respect. On the other hand, in Sanskrit, those names are treated as “mean” or “lowly”. This is the reason why we reject the Sanskritisation pracitised in India. The Koyas’ indigenous history proves the inherent strength of the Adivasis and Dalit Bahujans, and shows how starkly different and anti-Brahminic it was.

My visit to this museum resolved many unclear linkages between the Harappan civilisation and the indigenous people’s culture today that I was struggling to establish as superior to Aryan Sanskritic civilisation because of its productive ethics.

In my view, the Koya, Gondu, Munda, Kondareddy and Chenchu tribes are the great grandchildren of the Harappans who built the earliest, great civilisation of India in the Indus Valley. Evidently, Brahmin-Banias cannot claim such linkages. Knowledge and living patterns appear the same. The Ganga basin does not show such strong linkages with the Harappan civilisation. But it is important that such indigenous museums are established in the region and commonalities compared.

When I visited the Kamaram makeshift museum (set up with the help of the local district administration), it reminded me of the Harappa civilisational artifacts, instruments, tank systems and so on. They had a system for rain and drought predictions. The Koya interpreter told us that their Mau flower- and water-based tests and predictions, and bird and animal behaviour-based predictions of rainfall by and large remain accurate.

One of the Koyas said their predictions are more accurate than Brahminic Panchangam predictions. I was really astonished by their scientific and accurate explanations about the cause and effect of nature’s ways.

The Koyas’ engagement, synthesisation knowledge systems and predictions are basically around human survival, development and community wellbeing. Their engagement with war and violence is almost zero, showing that indigenous forces were against such destructive behaviour.

Their social life is well detailed in the book Indigenous Knowledge of Koyatoor of Kamaram, based on a study by Birsa Munda Youth Association. In contrast, the Brahminical knowledge system is mainly around war, violence and power. Adivasi knowledge, as it survives in the villages and gudems today, is for social collectives and anti-discriminatory in nature. Vedic texts suggest offering sacrifices for destruction.

Fascinating use of soil, earth and water

The museum is 15 kilometres away from Medaram Village, where the biggest “Sammakka Jatara” is held every alternate year. One can easily understand how Sammakka and Sarakka goddesses have evolved over time. The bamboo figurine planted as the goddess on a round-shaped and well decorated mutti (soil) Gadde (pedestal) with white or colourful new clothes attracts observers to their divine placement.

They use turmeric, very red cumcum (they never use saffron) and white stone and rice powders for their spiritual, cultural and civilisational symbols. There is no notion of “sanyasis” among them and they believe all adults should marry and procreate. The museum is 15 kilometres away from Medaram Village, where the biggest 'Sammakka Jatara' is held every alternate year.

The Koyas’ Indigenous Knowledge of Koyatoor of Kamaram reaffirms my proposition in my book Post-Hindu India that adivasis are the “unpaid teachers” of India, unlike Brahmins.

The tragedy is that the dakshina they deserved went to the brahmins; in fact it should have gone to Koyas, Gonds, Bhills, Mundas and so on. All castes of India are indebted to the indigenous people.

The museum and visits should have given new direction to the nation. We saw the tribals resolve that their children should study in well-established English-medium schools. The central and state governments must provide them world-class schools with the necessary infrastructure. They also decided they must add INDIGEN (with English spelling) to their names so that all adivasis are identified as “indigenous” people — it will help them gain national as well as international visibility.

Brahmins across India can be easily identified — they share common names like Shastri or Sharma; Banias, on the other hand, have the end name “Gupta”. Hence, indigenous people should add the Indianised INDIGEN to their name too.

Once this education and name revolution progresses without violence or atrocity, indigenous forces will be empowered across India. If their children get an English-medium education and learn one regional language till Class 12, their culture will survive — and the INDIGEN can truly become a modern, English-educated national force.

Kamaram has paved an exemplary path for cultural revolution in India.

#Indus Valley Civilisation, #Harappan civilisation, #Ancient India, #Telangana
The views and opinions expressed in this article are those of the authors and do not necessarily reflect the official policy or position of DailyO.in or the India Today Group. The writers are solely responsible for any claims arising out of the contents of this article.