Why BJP loses out in the south: Why Narendra Modi's saffron party is unable to cross the Vindhyas in victory

Powerful local players. Rooted regional sensitivities. A host of political miscalculations. And an inability to catch the pulse of the South. All this has limited the Modi Wave to the north of India.

The standalone triumphant victory scripted for itself by the Bharatiya Janata Party — particularly by the deadly combo of Narendra Modi and Amit Shaw being at the helm, yet micromanaging the show to its minutest detail — with 303 seats in its kitty would have surely renewed confidence among the rank and file of the party.

While the National Democratic Alliance covered over 65% of the Lok Sabha seats, BJP alone pulled off 55% of the seats in the lower house of Parliament.

However, in what appears to be a complete contrast to the region north of the Vindhya range, the saffron party could not gain any foothold in the Southern states, barring Karnataka — making Southern India an unconquered quest. Only victory down south: Karnataka has been the BJP's one stronghold in South India. (File photo: PTI)

The Southern states of Karnataka, Andhra Pradesh, Telangana, Tamil Nadu and Kerala, and the Union Territories Andaman & Nicobar Islands, Lakshadweep and Puducherry account for 131 of 543 (542 this time, since polling was cancelled in Vellore, Tamil Nadu).

The Congress and its allies made a swooping gain in Andaman & Nicobar, Kerala, Tamil Nadu and Puducherry. Andhra Pradesh and Telangana chose to go with their regional parties, and Lakshadweep was won by the Nationalist Congress Party. Karnataka, however, saw a sweep of saffron.

With the election getting postponed in Vellore, the BJP has won a measly 29 out of 130 seats in the South — 25 (out of 28 seats in the state) in Karnataka alone.

The stumbling blocks for the BJP from making inroads into the South have historic, geographic, religious and emotional reasons.

Historically, the BJP and its alma mater, the Rashtriya Swayamsevak Sangh, have had a dismal presence in Southern India. The presence has been limited to certain urban pockets, with karyakartas reaching out to likeminded people alone. The campaign has always stemmed from the tradition which purports an objective of minimising other religions.

The BJP’s antagonism to conversion to Christianity and its hostility to Islam, however, failed to cut much ice with people down South.

Religion as a political narrative has remained baseless over the years in the South. The communally sensitive pockets that frequently reeled under riots are far fewer in the South, as compared to the rest of the country. Cult: The towering personalities of politicians has always dominated narratives in the South. (Photo: Reuters)

Main factors that influence electors in the South are — cash for votes (for alleviating poverty), cinema (owing to the campaigns/contests by movie stars), liquor (to let their hair down), and cult political personalities like M Karunanidhi, MGR, Jayalalithaa, Dr YS Rajasekhara Reddy, NTR, KCR, and, more recently, YS Jaganmohan Reddy.

These have remained barriers to the BJP to get cracking in the South. Strong regional parties like the DMK, AIADMK, TDP, TRS have been at the helm of power in the state and have proven Arvind Adiga’s views in his Booker Prize-winning White Tiger vis-à-vis the North and the South. Adiga had described the North as “dark India” and the South as “bright India” in line with the large-scale development.

Caste has always played a significant role in the politics of South India. The anti-Brahmin movement held sway among Tamil politics and caste groups like Vanniyars (dominant in northwest parts of Tamil Nadu — in the Dharmapuri-Salem belt), Thevars (dominant in southern Tamil Nadu, in the Madurai belt) and Gounders (in the western Tamil Nadu’s Kongu belt, including Coimbatore, Erode and parts of Salem), continue to be influencers.

Vokkaligas and Lingayats have been political warhorses in Karnataka. The Reddys and Kammas have been traditionally at daggers in Andhra Pradesh, while the numerically strong Kapus are now trying to demonstrate their political muscle in the state.

In Kerala, political chemistry works on the lines of Communists and anti-Communists (led by the Congress). Despite the Sabarimala issue evoking massive reactions, the BJP could not even scrape the surface in God’s own country. Further, the Christians and Muslims in the state largely favour the United Democratic Front, or the UDF (political alliance led by the Congress), while others rally behind the Left Democratic Front, or the LDF (led by the Communists). 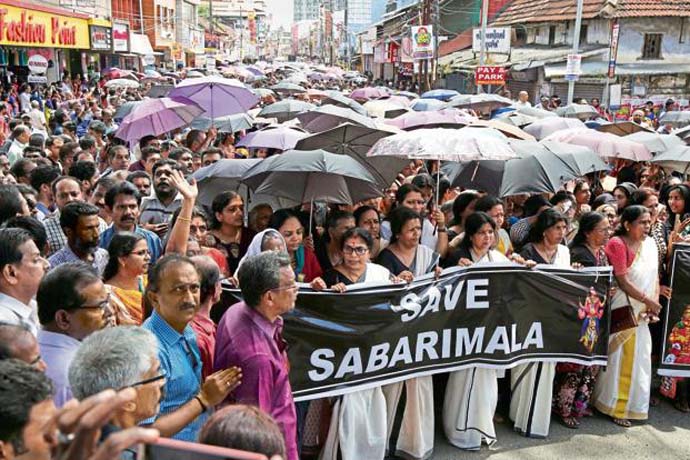 It didn't bring votes: Despite the Sabarimala issue evoking massive reactions, the BJP could not win at the polls. (Photo: Reuters)

Telangana is the only state which has not seen politics based on caste equations.

Chief Minister KCR belongs to the forward Velama caste which is numerically weak. The Reddys dominate all political parties in Telangana when it comes to numbers, and all parties have someone from the Reddy caste in very senior positions. In most political contests, it is a battle pitched between one Reddy versus another.

Besides, the frequent cross-border disturbances and incursions witnessed in the North, from Kamarup to Kutch, all along the Himalayas, do not throw routine life out of gear in the southern peninsula. Such disturbances invoke the kind of nationalism that the BJP banks upon. The jingoism and rhetoric that followed the Kargil war or surgical strikes do not trigger pro-BJP political weather in the Southern states. 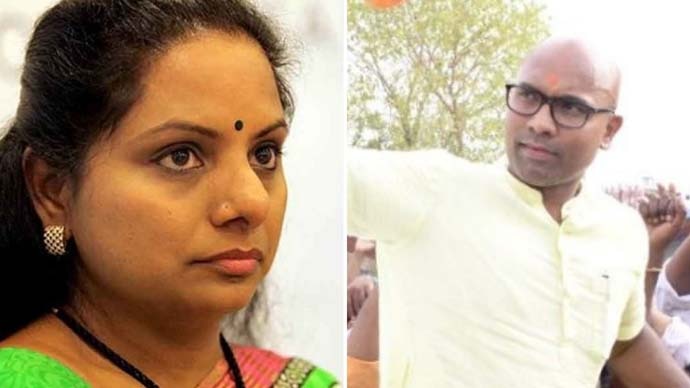 Surprise Win: Both the TRS and the BJP were shocked with the results in Nizamabad seat in the Lok Sabha elections. (Photo: PTI, Twitter. Collage: DailyO)

For the jet that is the TRS, the Lok Sabha polls came as an air pocket that caused the electoral expedition to dip suddenly and unexpectedly. The pink party had to concede four Lok Sabha seats to the BJP — as opposed to just one in 2014. The significant seats the BJP has wrested from the TRS are Karimnagar and Nizamabad. The national party not only retained its Secunderabad Lok Sabha seat, but it also won Adilabad — much to the surprise of its own leadership and to KCR’s shock.

The TRS made it only in nine Lok Sabha seats, while the Congress bagged three, and the MIM got one.

Intriguingly, the elections held to the Panchayat Raj bodies almost a month after the Lok Sabha polls again meted out a humiliating defeat to the BJP and the Congress.

The TRS bagged all the 32 Zila Parishad and the people rallied behind the ruling party in the state. In fact, the Congress was routed at the hands of the TRS in the Panchayat Raj elections and the BJP could not even offer a feeble opposition, leave alone a respectable contest.

This amply proves that it was providence that saw the BJP through in four Lok Sabha seats — but it does not have the claimed clout at the grassroots level among the people.

The BJP scored a niggardly 0.96% of votes in Andhra Pradesh — which was conquered by the YSR Congress, led by YS Jaganmohan Reddy. The BJP lost whatever little base it had in the state until the 2014 elections.

The Modi wave did not work in Andhra Pradesh at all.

What the BJP failed to recognise was that it was piggybacking on the Telugu Desam Party and its supremo N Chandrababu Naidu for its political gains. With the TDP’s popularity waning, BJP stood no chance. Before walking out of the NDA, Naidu successfully painted Narendra Modi as the villain and the one who derogated from the promise of Special Category Status. The BJP’s weak and inconsistent leadership — that hasn’t grown from its ranks — has been putting up a perfunctory performance in elections.

No one stood a chance: All political opponents were neatly crushed when Jagan's juggernaut came rolling by. (Photo: PTI)

As I see it, BJP had a serious problem too in the form of M Venkaiah Naidu (until he was elevated as the Vice-President of India). Venkaiah was known to always shower encomiums on Chandrababu at the drop of a hat. Further, Venkaiah apparently always supported the interests of the TDP.

The party chose to ignore this for over three decades.

Jaganmohan Reddy, on the other hand, has been able to successfully build a vote bank from scratch. His dubbing of the TDP as the 'villain No. 1' of Andhra Pradesh has percolated to the people, who have bought the narrative. This has rendered BJP’s association with the TDP counter-productive. People rallied behind Jagan and anybody who came in the way of the ‘Juggernaut’ was crushed mercilessly. ‘Humiliating defeat’ is an understatement to describe the defeat faced by the TDP, the Janasena of actor Pawan Kalyan, the Congress and the BJP (in that order) in Andhra Pradesh. 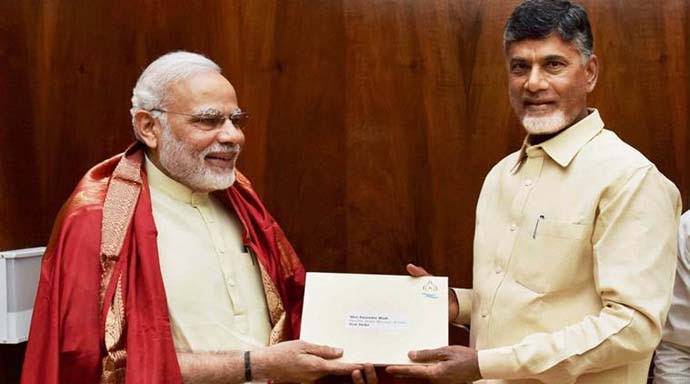 When things fell apart: BJP's piggybacking on the TDP and its supremo N Chandrababu Naidu proved to be its undoing. (Photo: PTI)

The YSR Congress won 22 out of 25, leaving TDP to a meagre three Lok Sabha seats. Others came a cropper.

This besides, Narendra Modi and Amit Shah lost on their appeal to electors during the campaigning. They kept urging the people to defeat the TDP — but reportedly could not bring themselves to even feebly request a vote to BJP.

TN & Kerala also give a zero to BJP

Ever since former Chief Minister J Jayalalithaa died, the BJP’s overtures in Tamil Nadu have been viewed suspiciously by the people. Not looking southwards: The focus of the Modi-Shah duo remains anywhere but winning below the Vindhyas. (Photo: Reuters)

Kerala also displayed its resentment of the LDF by rejecting all of its candidates, but one. The LDF won a solitary Lok Sabha seat, while the Congress-led UDF posted a landslide with 19 seats. The BJP had fallen by the wayside.

Building the party in a completely new domain — be it Andhra, Telangana, Kerala or Tamil Nadu — would amount to day-dreaming owing to unfavourable political weather.

To crack the code, the BJP would have to adapt itself to Southern politics.

However, now Amit Shah would be busy with his ministerial responsibilities. In the present term, Modi would also be busy to prove to the country and the world that he’s the most successful Prime Minister that the nation has had.

Clearly, the duo’s focus remains anywhere — but the conquest of the South.