Now, which kind of malafide is this?

After Allahabad, there is a demand to rename Aligarh as Harigarh, Faizabad as Saket, Musaffarnagar as Laxmi Nagar, Azamgarh as Aryamgarh, Lucknow as Laknavati or Laxmanpur.

This is a malicious communal re-writing of India’s history to rally the faithful.

For the present, I will deal with Allahabad, which BJP Adityanath led government of UP has renamed Prayagraj after the Express train connecting Delhi to Allahabad.

Whether there was a town, not village, of the name Prayag earlier is lost to history. Whether there was a Raj called Prayagraj is doubtful. Possibly a village near the rivers blossomed during the Maghmela or Kumbh melas. A Prayag railway station beyond the University is nondescript. 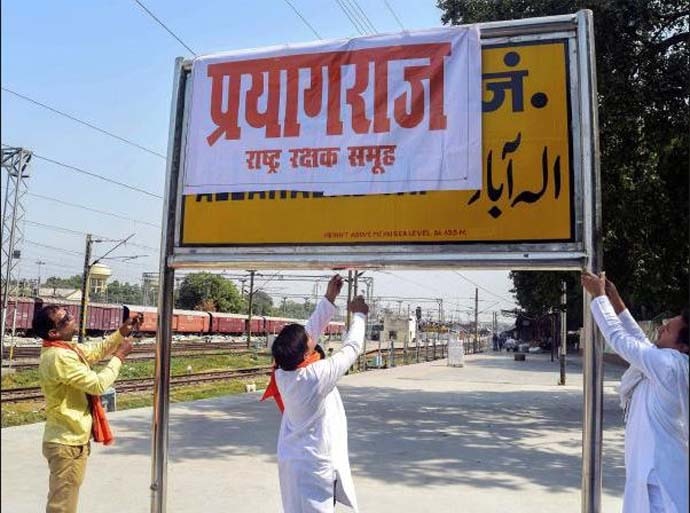 How can name change of a well-established town be this easy? (Photo: PTI)

In the prachin past neither river was irrigated to the extent they are now. They were invariably in spate, destroying pre-monsoon cultivation areas.

The Allahabad as we know it was protected by Akbar’s huge bandh without which, there would have been no Allahabad; or Prayag if there ever was one. The waters of both rivers would have swept over what is Chowk and the lowlands till civil lines.

How can name change of a well-established town be this easy?

Or is it a process grounded in law?

According to Constitutional interpretation, every exercise of power that affects rights (not just fundamental rights) needs to be backed by law.

A Cabinet decision by itself is not ‘law’.

What is the law and process for renaming Allahabad?

Is this an area within the legislative and executive power of the State?

The Seventh Schedule of the Constitution allocates power to the Union and State in List I and II respectively, with the Union overriding in the Concurrent List III.

Which kind of malafide is this? Actually both. In law and in fact. (Photo: UP tourism)

Why is this important? There are extended sites in Allahabad exclusively in the Union’s jurisdiction: The High Court, University, Railway station and Cantonment cannot be changed by the State government.

The High Courts of Bombay, Calcutta and Madras carry their original names. Allahabad University is a Central University.

The Fort and Khusrau Bagh are recognised historical monuments and more than one hundred years old.

Three issues may be directly answered: (i) Mere declarations do not change the name of a city. Changes have to be grounded in law. No declaration can be in excess of the power given (i.e. ultra vires) the Act or Constitution. (ii) The High Court, University, Railway, Cantonment are not within the jurisdiction of the State of UP but squarely with the Union government. (iii) The process of examination including the jurisdiction of the Municipality, and discerning the real motive.

The motive is clearly to rewrite history communally.

That is to say, Ancient Hindu history is to prevail over what is perceived as Medieval Muslim history.

These terms “ancient”, “medieval” and “modern” are British constructs attributed to the historian Vincent Smith.

The flow of history is interrupted by Hindu revivalism, but one that perjures history for divisive politics of a communal nature. Unfortunately, celebrating one faith and prejudice another on religious grounds violates the right to religion and the principle of equidistance towards all faiths under both the equality and secularism principles of the Constitution.

Legal malafide simply means that action taken was legally untenable, beyond the purposes or text of the law.

Now, which kind of malafide is this?

Actually both. In law and in fact. Given the timing of the declaration, it has electoral implications for the election in states and of course the Union elections to Parliament in 2019.

This motive is clear from the action of renaming and the reaction to it. The grand design is to spread renaming in UP which is India’s most diversely populated state and make it Hindu for purely communal reasons beyond the law.

There must be wide consultation. Reasons must be given why the settled name must go (the negative reason) and why the new (supposedly old) one must come into vogue (the positive reason). The file should be exposed thread bare. This is an issue that relates to who we are and rewriting our composite history for political reasons to privilege one faith over another for dubious reasons. It redefines many of us personally to dissolve who we are.

Also Read: By renaming Allahabad to Prayagraj, how Yogi Adityanath ended up paying a great tribute to Akbar