Warning bells: If US troops exit Kabul, and the Taliban holds sway, Pakistan could unleash 'Ghazwa-e-Hind' against India

In the next few months, one can expect the Taliban to drag negotiations with the US

Nearly forty years ago, on Christmas Day in 1979, Soviet tanks and troops were airlifted into Kabul — in what became a bloody battle between ‘godless’ Communists on one side, and Islamic mujahedeen backed by the West, Pakistan, the Emirates and Saudi Arabia on the other.

The 21st century has seen the results of an unending US-led ‘Global War on Terror’, located in Afghanistan, among other Muslim countries. The Afghans were punished for their location — while Pakistan rewarded for its. This also makes it the longest war that any country has faced in modern times.

Today, most people, when they talk about the situation in Afghanistan, also refer to it as ‘America's longest war’. No one really considers that the helpless Afghan population has been subjected to an endless war, which has inflicted unimaginable deprivation and depredation for nearly 40 years. 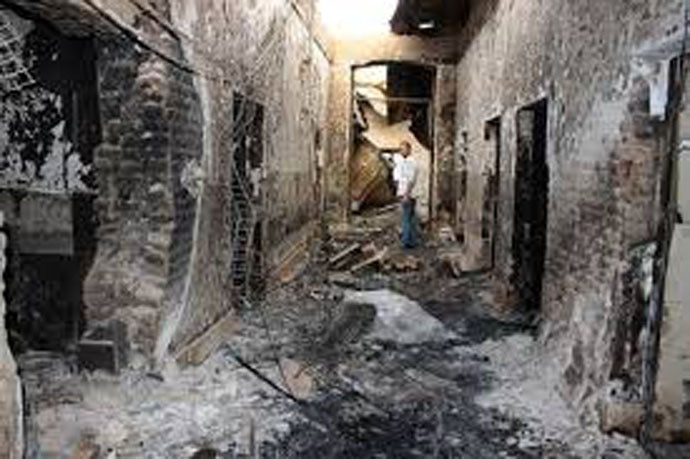 For 40 years, Afghanistan has been in the throes of a war it's gained nothing from. (Photo: AP/file)

Afghans have been punished for being on the crossroads of superpower rivalry, and for no fault of theirs, while the narrative has been that these wars were for their ‘liberation’ from the Communists in the 1980s, and ‘emancipation’ during the dark days of the Taliban and Al Qaeda in the 21st century.

The WTC attack in New York was by Saudis mostly. The Taliban were sheltering Al Qaeda — and the Pakistan Deep State was sheltering and assisting the Taliban.

Afghanistan was the only place where an angered America could afford to exhibit its wrath.

Americans fought in the wrong place, Afghanistan, with wrong and inadequate means. They were helped by a ‘major non-NATO ally’ — as President Bush referred to Pakistan, which was double-crossing them even as the Americans paid handsomely in billions of dollars for this duplicity.

There were never enough troops on the ground to defeat and hold territory gained.

Wars were fought from the comfort of air-conditioned consoles thousands of miles away — where soundless blips on LED screens show collateral damage, but do not record the pain, nor ensure victory.

Excessive reliance on aerial power means that the situation on the ground is adverse and the military situation is in a stalemate. A superpower cannot afford to be in a stalemate, for this actually means defeat.

No wonder today, the Americans are negotiating with the Taliban — whom they had sworn to eliminate — for a safe and honourable exit for US forces from Afghanistan. There were never enough American troops on the ground to defeat and hold territory gained. (Photo: Reuters/File)

The effect of this decision on other regional players is assumed to be of little consequence.

This is a clear exhibition of the ‘America First’ policy of President Donald Trump. Meanwhile, Trump, possibly pursuing a declared (April 20, 2019) date for a negotiated settlement, suddenly announced partial troop reduction even as his representative was speaking to the Taliban and the violence continued unabated. A suicide attack — this year’s 22nd attack in Kabul — accompanied by an attack via unknown terrorists killed 40 persons in Kabul on December 25.

The Taliban denied any responsibility for this attack, so suspicion would then be on the Islamic State, which is believed to be increasing its profile in Afghanistan.

According to The Armed Conflict Location and Event Data Project (ACLED) cited by Afghanistan-watcher Frud Bezhan, a journalist with the Radio Free Europe/Radio Liberty (RFERL), there have been 44,655 fatalities in Afghanistan from January 1 to December 8, 2018.

These include civilians, government forces and militants. This places Afghanistan ahead of Yemen and Syria — yet, the narrative is about the latter two, even in India.

As the security situation in Afghanistan worsened and the Taliban gained territory, with the US unable to put more soldiers on the ground, this year the US dropped more bombs than in any other year of this war. Withdrawal of ground forces will only mean greater reliance on air attacks.

The cycle of violence increased early in 2018 as the rivalry between the Taliban and the Islamic State spilled out on the streets of Kabul. Dr. Shanthie Mariet D'Souza wrote (Mantraya Analysis, #22 February 22, 2018) that although the government played down these incidents, the insurgents were successful in getting renewed international media attention in this battle of the narratives.

The Taliban also stepped up their activities because of an inadequate government response. The Taliban were now “a decentralised rural insurgency with undiminished ability to target urban centres”. Estimates about how much territory is under Taliban control vary, but it is substantial — even up to 40%. 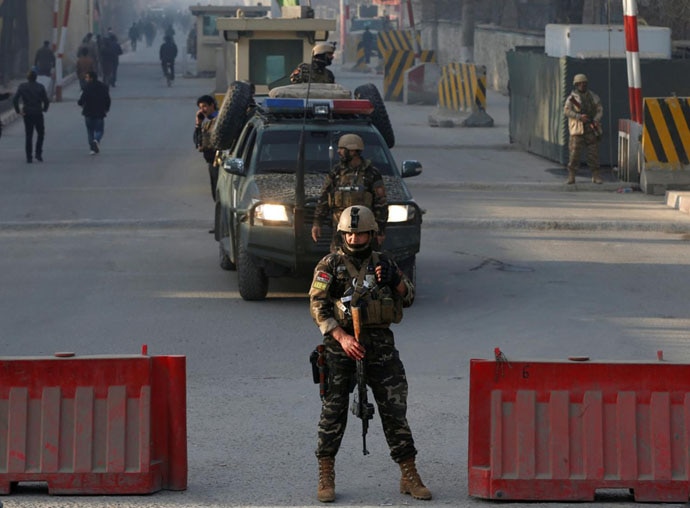 Afghan security forces at a check-point close to the national intelligence agency in Kabul, which was attacked on December 25. (Photo: Reuters)

In the next few months from now, one can expect the Taliban to drag the negotiations while pretending to be earnest about the process, and then come back in the spring of 2019 with renewed vigour.

The Taliban and their mentors, Pakistan, knew they just had to wait it out. This became very clear when President Obama announced in 2009 that the US would leave Afghanistan in 2011. In the immediate future, the Afghan government will possibly yield more ground to the Taliban.

In recent months, very little has been heard about the Haqqani Network. The Pakistanis are possibly keeping it under control for a final assault.

The Taliban have not evolved into a political movement and have remained a jihadi force. It is highly unlikely that the Taliban will accept the present Afghan constitution, and would insist on governance under Islamic law. A Taliban victory after a deal with the US will only bail out the US — without bringing peace to the country. Afghanistan could easily break out into ethnic, sectarian, regional and tribal tensions.

There is also the question of the increasing profile of the Islamic State remnants now in Afghanistan, with their alliances with others. As Andrew Bacevich put it very bluntly, “The United States’ war in Afghanistan began with an illusion that it was incumbent upon the US to liberate and transform that country. The war in Afghanistan will end, as the Vietnam War ended — in shame and abandonment.” (The war in Afghanistan isn't a 'stalemate.' The US has lost.")

There are reports of the Islamic State in alliance with the Islamic Movement of Uzbekistan and Tehrik-e-Taliban Pakistan gaining some presence in northern Afghanistan, close to countries like Tajikistan, Uzbekistan and Turkmenistan, which have had traditionally close ties with Russia. They also have a presence in Nangarhar and Paktika provinces bordering Pakistan. It is possible they will later drift to other pastures east or north.

With the recent discovery of ISIS cells in Delhi and UP, a likelihood of such cells having been established or functioning under the banner of ISIS elsewhere as well would be a matter of great worry for the Indian security apparatus. It is unlikely the Arabs operate them, but merely some locals using the franchise’s name, or induced to do so. 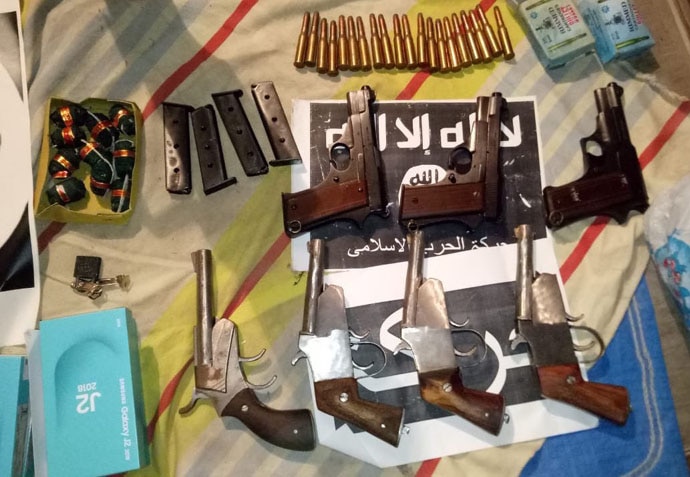 The recent discovery of ISIS cells in Delhi and UP is a matter of concern for the Indian security apparatus. (Photo: Twitter)

Pakistan may feel the loss of American largesse in case peace negotiations are successful. Pakistan has meanwhile worked out deals with the UAE, Saudi Arabia and China to keep some funds flowing in to lift its battered economy.

There is another possible gain. Russia and China will also show greater interest in affairs in Afghanistan, which would be in line with Pakistan’s interests in Afghanistan, so long as the US is kept out.

There is another aspect that needs to be kept in mind as the Great Game may continue in different forms. US President Trump recently tweeted that the Saudi government had agreed to help finance the rebuilding of Syria. This could be a dual-purpose exercise, which provides business opportunities to American industry to build what they themselves, with Saudi Arabia, first helped destroy. The hope is that this will keep the Russians and China away — or, at least, prevent them from being in control. This plan could be replicated in Afghanistan for the same reasons.

Once the US leaves Afghanistan, it will rapidly lose interest in Pakistan — and even the region. There would be a loss of rent to Pakistan — but it will also see this as an opportunity to strengthen its control in Afghanistan.

For this, it will want to pretend to keep peace with India — it will make all the polite noises about living in peace to keep its eastern border quiet. It can be expected to keep the Khalistan and Kashmir issues on the back-burner until Afghanistan is ‘sorted out’, with its India-specific jihadi outfits intact.

Pakistan will see a Taliban victory in Afghanistan as a vindication of is policies, and both the Taliban and Pakistan will depict this as a victory of the faith over another superpower. This will be enough encouragement to unleash its assiduously nurtured India-specific Ghazwa-e-Hind battalions against India.

We need not be beguiled into believing otherwise.

Also read: US withdrawing troops from Afghanistan: Instead of whining softly, India must be hard-headed and hard-hearted too