The BJP made women core focus of all its schemes. This was empowerment like never before. It might have missed the BJP's bitter critics. But global institutions like the World Bank lauded the efforts.

No discussion on the handsome victory of the BJP in the 2019 Lok Sabha elections can be complete without elaborating on how the Narendra Modi government empowered women through its transformational ‘Beti Bachao, Beti Padhao’ initiative, which has not been a mere slogan but a mission statement.

In his riveting address on May 25 in the Central Hall of Parliament, fresh from a historic victory, Modi again won over the women of the world's largest democracy when he said — “Is baar maataon aur behnon ne kamaal kar diya. Maatrushakti hamara raksha kavach hai. (Women did wonders this time. They emerged as our lifeguard).” Modi has clearly won over the women of the world's largest democracy. (Photo: Reuters)

The fact that Modi's women's empowerment schemes found huge resonance with the average Indian woman is best exemplified by the fact that more than 60% upper caste women, almost 58% OBC women and anywhere between 43%-46% women from the Scheduled Caste and Scheduled Tribes categories voted for the BJP in the recently concluded General Elections, as per various post-electoral surveys.

The surge in the sex ratio at birth (SRB) in Haryana, from 871 in 2015 to 914 in 2017, with districts like Panipat and Yamunanagar reporting SRB of 945 and 943 for every 1,000 males, showcases the tremendous strides made by Narendra Modi and his government in the last five years in improving the fortunes of India's women.

SRB apart, the conviction rate for crimes against women too improved dramatically in many states — particularly Maharashtra, from a dismal 8% in 2008 to a solid 54% under the BJP-led alliance.

To cut a long story short, on every conceivable parameter, women in India were far safer in 2017 or 2018, than they were in, say, 2012 or 2013. Yes, when it comes to the safety of our girls, there is always room for more but in this case, the buck does not stop with the elected government alone. The other stakeholders in nurturing a safe environment are civil society and the media. Unfortunately, glib-talking activists and Bollywood starlets who adorn TV studios have trivialised ghastly crimes like rape, thanks to their selective outrage.

While crimes against women in states like Uttar Pradesh are widely reported and rightly so, there is deafening silence from large sections of some media that have never deemed it fit to highlight crimes in, say, a state like West Bengal. Working towards women's empowerment is best achieved when we get rid of this doublespeak.

For instance, there has been stony silence from a select bunch of lawyers, activists and what I'd call the ‘media mafioso’, with no questions asked of the bloodthirsty Communist ideology in Kerala, which reported a total of 16,960 cases of crimes against women and children in 2016 — including 2578 rapes!

In violent crimes like rape, to be able to come out in the open, talk and discuss fearlessly and name and shame the culprits is half the battle won — the greatest service that the Modi dispensation has done in its first term is to prevent crimes from getting communalised by ensuring that such elements from the minority community do not get an unnecessary protective shield, simply by virtue of the religion they belong to.

It is a highly politically incorrect statement to make, but one of the most horrific legacies of the previous Congress-led regimes was minority appeasement, and to such an extent that many crimes by radicalised elements from the minority community went unreported — or did not elicit the needed outrage and attention. Modi has changed the ‘appeasement, vote-bank centric’ narrative.

Law and order in BJP-ruled states has been far better than those ruled by the Congress. Karnataka under its former chief minister Siddaramaiah has been testimony to this. As per National Crime Records Bureau (NCRB) data for 2015-16, there were 14,131 crimes against women, with the conviction rate being only 4.7%, in Karnataka. In Bengaluru alone, only 32 of the 921 cases resulted in conviction, with the conviction rate being barely 3.5% in the said period. In June 2018, Thomson Reuters Foundation (TRF) ranked India as the most dangerous country in the world for women — ahead of war-torn Syria and Afghanistan.

What was laughable about this report was that reportedly a measly sample size of 550 respondents was used to making sweeping comments on a country of 1.3 billion people, home to some of the best female minds nationally and internationally. Ironically, of these 550 women sampled, only 43 were Indian, or those who had roots in India. The ghettoisation of large parts of Britan, Germany and Sweden, where radicalised Muslim immigrant gangs have wreaked havoc, raping minor girls with impunity and getting bail within 48 hours in most cases, is something that conveniently skipped the surveyors at TRF, as did the fact that till recently, women were not even allowed to drive in Saudi Arabia, a country that was behind India at fifth place, in these biased and motivated rankings.

The BJP-led Modi government, as is evident, has had to fight a severe battle not only on its home turf, against Left-centric armchair activists, but also against what many consider hopelessly biased names like the TRF too. However, the Modi government, undeterred by these obstacles, took a giant leap of faith on 21st April 2018 and via a historic ordinance, following that up with a path-breaking Cabinet approval on December 28, 2018, in the winter session of Parliament, to bring in amendments under Sections 4, 5, 6, 14, 15 and 42 of the Protection of Children from Sexual Offences (POCSO) Act, to ensure death penalty or life imprisonment to rapists where the victim is less than 12 years of age. This also raised the minimum imprisonment tenure from 10 to 20 years where the victim is less than 16 years, and from 7 to 10 years where the victim is an adult, setting up fast-track courts also to deliver verdicts in a time-bound manner.

These have indeed been sweeping measures by the Modi government, to ensure justice is neither delayed — nor denied. 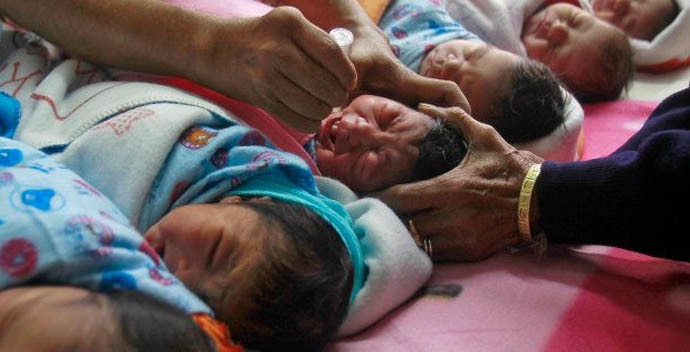 The Modi government has worked wonders for the girl child. (Source: Reuters)

Also, measures like the social audit of 3,000 shelter homes across the country which was completed by August 2018, with more than 40 being forced to close down for not adhering to norms, after the National Commission for Protection of Child Rights (NCPCR) conducted a social audit of Child Care Institutes (CCIs) and submitted its report, reflect how the safety of minors, especially the girl child, has always been a top priority for the Modi government.

It needs to be pointed here that while the BJP-led Modi government brought to book the guilty in the notorious Muzzaffarpur and Deoria shelter home cases, what is equally important to remember is how the criminal apathy of previous political establishments, before the Yogi Adityanath government came to power, abetted the reported exploitation of young children and women. The Deoria shelter home, for instance, was given recognition by the Bahujan Samaj Party (BSP) in 2009-10 and then the Samajwadi Party (SP) reportedly went ahead to give this notorious shelter a “woman and child protection home” status.

Coming back to the Beti Bachao, Beti Padhao campaign, one of the most decisive steps by the Modi dispensation on this front has indeed been bringing in the Juvenile Justice (Care & Protection of Children) Act of 2015, which lowered the trial age for heinous crimes like rape and murder from 18 to 16 years.

A 16-year-old would now be treated and punished like any other adult, as per due process of law under Sections 376 and 302 of the Indian Penal Code.

Left-liberal cheerleaders and critics of various hues who have been mocking the Beti Bachao campaign would do well to know that the Sukanya Samriddhi Yojana, to facilitate the education of the girl child, has already reached out to more than 1.52 crore aspirational young women. Again, of the over Rs 7 lakh crore that has been disbursed to empower more than 15 crore people under the Mudra Yojana in the first term of the Modi government, at least nine crore have been women, largely from the Scheduled Caste and Scheduled Tribe categories. Ditto with the Jan Dhan Yojana, wherein, of the 34 crore odd bank accounts opened, more than 50% of the beneficiaries were women from the weakest sections of the society — eliciting huge appreciation from the World Bank, which lauded India for bridging the gender divide and gender disparities that existed in the past, while executing the Pradhan Mantri Jan Dhan Yojana, by far the biggest financial inclusion scheme in the world, ever.

However, once again, the Modi government came in for generous praise from the Global Findex Survey, 2017, which estimates that 77% of Indian women now owned a bank account — against 43% and only 26% in 2014 and 2011, respectively. On this basic measure of financial inclusion, females are more ‘financially included’ than ever before thanks to the Jan Dhan Yojana. This is a great first step because a bank account is the gateway to other financial services and deeper financial engagement, eventually.

Again, to provide assured, comprehensive and quality antenatal care, free of cost universally to all pregnant women on the 9th of every month, Pradhan Mantri Surakshit Matritva Abhiyan (PMSMA) guarantees a minimum package of antenatal care services to women in their second and third trimesters of pregnancy at designated government health facilities. More than 1.16 crore antenatal check-ups were conducted at over 12,900 health facilities across most states and UTs, with over 4,900 volunteers registered to address more than six lakh high risk pregnancies that were identified, in the last five years.

Be it building over nine crore toilets and making large parts of the rural hinterland Open Defecation Free (ODF), financially helping ‘betis’ with their education and overall well-being via the Sukanya Samriddhi Yojana, which by early 2019, had over 1.5 crore subscribers, with total deposits of over Rs 25,000 crore, or giving the lady of the house access to smokeless kitchens in rural India via distribution of almost seven crore LPG cylinders under the Pradhan Mantri Ujjwala Yojana, clearly, women and the betis of India have been at the forefront of the BJP-led Modi government’s Sabka Saath, Sabka Vikaas — and now additionally, Sabka Vishwaas campaign.

The biggest vindication of the Beti Bachao, Beti Padhao scheme came from the World Bank’s Global Findex Survey 2017, which said that 55% bank accounts opened globally between 2014 and 2017, came from India. In a ringing endorsement of Prime Minister Narendra Modi’s Pradhan Mantri Jan Dhan Yojana, the survey noted how the Jan Dhan bank account ownerships have bridged the gender disparity levels from 20% in 2014 to just about 6% in 2017.

Also, the rich-poor divide in terms of bank account ownerships was down from 15% to 5%, in the said period.

It is thus apt to conclude by saying that if 50% of India's electorate comprising women came out in droves, rejecting caste, creed, ideological and religious affiliations to vote for Narendra Modi and the BJP, becoming in turn, Modi’s ‘Raksha Kavach’, Modi is truly India's ‘unifier and reformer in chief’, for giving a whole new dimension to the very concept of socio-economic inclusion.

Also read: Narendra Modi: The next five years ahead

Post your comment
#Beti Bachao Beti Padhao, #Ujjwala scheme, #Narendra Modi, #Lok Sabha elections 2019
The views and opinions expressed in this article are those of the authors and do not necessarily reflect the official policy or position of DailyO.in or the India Today Group. The writers are solely responsible for any claims arising out of the contents of this article.