Writing on the wall: The Congress is headed for a 1969 kind of split

Rahul Gandhi is not just a weakened leader, he is a failed one. His resignation may have been rejected, but that doesn't mean dissent within the party won't simmer.

On November 12, 1969, Indira Gandhi was expelled from the Congress for ‘indiscipline’.

In a letter, then-Congress president, S Nijalingappa, said: “The history of twentieth century is replete with instances of the tragedy that overtakes democracy when a leader who has risen to power on the crest of a popular wave or with the support of a democratic organisation becomes a victim of narcissism and is egged on by a coterie of unscruplous sychophants who use corruption and terror to silence opposition and attempt to make public opinion an echo of authority. The Congress as an organisation dedicated to democracy and socialism has to combat such trends.” Not his cup of tea: S Nijalingappa had expelled Indira Gandhi from the Congress in 1969. (Photo: Wikimedia Commons)

Gandhi by then had the support of many MPs and managed to assert her hold over the party.

But the party split into two factions — Congress (Oranisation) and Congress (Requisitionist).

The crisis in the Congress had on the face of it broken out over the choice of India’s president after Dr Zakir Hussain passed away halfway through his term as the President. A section of the Congress wanted to replace him with N Sanjiva Reddy — while Indira Gandhi’s preferred person was VV Giri.

But the 1960s was a time of turmoil, not just in the Congress but the entire country. India lost two Prime Ministers in quick succession — Jawaharlal Nehru (1964) and Lal Bahadur Shastri (1966). Language wars were breaking out in several states and communal tensions were flaring up. The 1967 General Election saw the Congress hold loosening in states like Andhra Pradesh and Kerala.

Turmoil in the party was thus natural.

Cut to 2019 — turmoil in the Congress is inevitable.

The Congress has again failed to reach the three-digit figure in the Lok Sabha. The party has secured just 52 seats. The leadership of Rahul Gandhi has tanked — once again. Leading from the front, he has himself lost in Amethi to BJP leader Smriti Irani. The three states that the party won under Rahul’s presidentship too have surrendered before the BJP’s election machinery. The crisis is so deep that the Congress for the second consecutive time cannot claim even the leader of opposition status.

The signs of this acute crisis, however, were written all over the Congress campaign. Congress 'Brahmastra' Priyanka Gandhi proved such a non-starter that Priyanka was found explaining to journalists that her candidates in India's electorally most important state, Uttar Pradesh, were fielded to cut BJP votes. 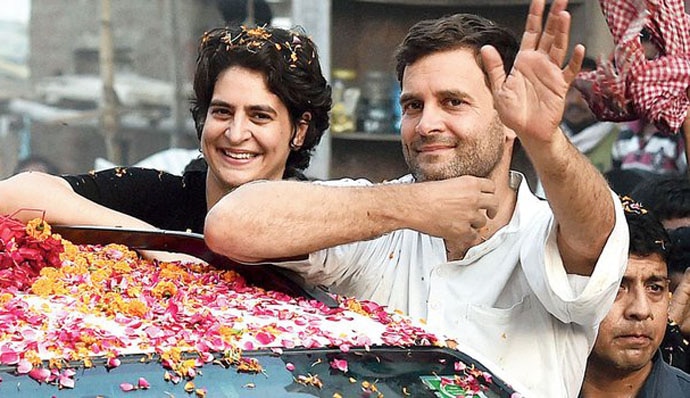 No responding wave: Despite Rahul's leadership and Priyanka Gandhi's campaigns, Congress was nowhere in UP. (Photo: PTI)

The grand old party has thus been reduced to what in local parlance is called ‘vote katua’.

At the Congress Working Committee meeting on May 25, Rahull Gandhi offered to resign. The CWC members unanimously rejected that offer. It is obvious. No leader will openly say Rahul should resign and the Gandhi family must make way for change.

But this doesn't mean nobody in the party wants change.

On May 20, 1999, the Congress expelled Sharad Pawar, PA Sangma, and Tariq Anwar for disputing Sonia Gandhi’s claim to lead the party. This could happen because many in the Congress saw Sonia as the ultimate saviour after coalition governments threw up non-Congress Prime Ministers like Atal Bihari Vajpayee, HD Deve Gowda and IK Gujral.

Congress members thought it was important to rally behind the Gandhis to remain in power. But now, the Gandhis look like the greatest liability the Congress has. Their simmering dissent has found a vent — and the strength to voice that dissent.

Rahul Gandhi, today is not just a weakened leader, he is a failed one. Priyanka Gandhi is no longer the elixir that can rejuvenate the party. If anything, her husband’s alleged corruption taints turns her into a liability that the Congress carried along in the one hope of returning to power.

In a failed set-up, it is not just the owner who suffers; individual careers too take a hit.

Those individuals then either stake claims to run the administration — or look for greener pastures. In the Congress, such individuals will now begin to question their future. It will not be enough for the party to issue a statement claiming collective responsibility for failure. It will not help to blame EVMs, it doesn’t even make for a facing-saving public argument. 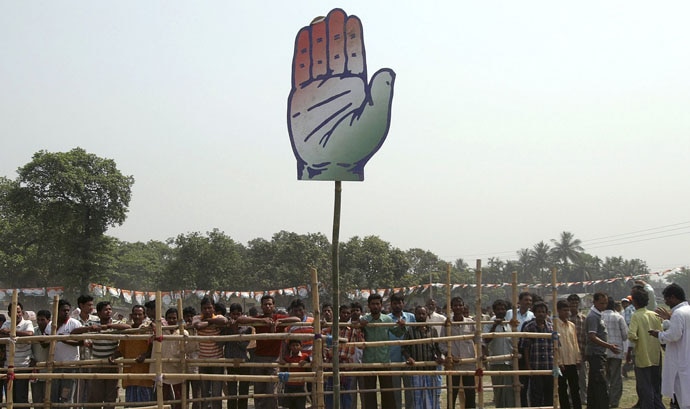 Will the hand say goodbye? The Congress is in a graver crisis today, more than ever before. (Photo: Reuters)

The Gandhis will have to make way for a more efficient face, one who can rejuvenate the party. If they don’t, an exodus from the party would start. A revolt within could also see the Gandhis being shown the door — much like Indira in 1969.

Indira could fight back because she was Prime Minister then. But Rahul Gandhi’s prime ministership is a distant dream. Sonia, at 72, reportedly has health complications bogging her down. Priyanka Gandhi is, so far, just a star campaigner in whose name votes clearly can’t be garnered.

A leadership change in the Congress is imminent.

The only thing that remains to be seen is whether the Gandhis will make way for it — or the decision will be thrust on them.

Post your comment
#Priyanka Gandhi, #Congress, #Narendra Modi, #Rahul Gandhi
The views and opinions expressed in this article are those of the authors and do not necessarily reflect the official policy or position of DailyO.in or the India Today Group. The writers are solely responsible for any claims arising out of the contents of this article.