Will Alagiri play spoilsport for DMK in 2019 Lok Sabha polls?

Madurai is still a stronghold of the expelled DMK leader.

Sibling rivalry never dies down in the first family of the DMK.

The long-standing feud between brothers MK Alagiri and MK Stalin had reached a crescendo when the former was expelled from the party in 2014, paving way for Stalin to take the reins of the Dravidian party.

From there on, it has been a decline for Alagiri who has been pushed into political oblivion. After lying dormant for years, Alagiri is now up in arms ahead of the 2019 Lok Sabha polls.

Firing a fresh salvo at MK Stalin, Alagiri said Stalin is the “non-working president” of the party, a comment potent enough to stoke the old rivalry between the duo, which may damage the political prospects of the party.

In 2014, Alagiri was suspended and then expelled from the DMK for anti-party activities

Speaking at the wedding function of a DMK functionary in Palamedu near Madurai, the former south zone secretary said, “The genuine cadres of the party are here with me. Only those who are behind power are in Chennai".

Receiving a rousing reception at the venue, an elated Alagiri recalled the old memories when he was given similar reception by the party cadres. “I was wondering whether I am coming for a party function or a private function,” he said.

Fondly called as “Anja Nenjan”, translated as a man with a brave heart, Alagiri was instrumental in holding the fort in Madurai and adjoining 10 parliamentary constituencies in southern Tamil Nadu.

Despite his expulsion, Alagiri wielded enormous influence in the middle- and lower-level cadre of the party. Known to win elections with money and muscle power, Alagiri popularised the art of influencing voters through “cash-for-vote” during the 2009 Thirumangalam by-election in Madurai district.

His recent observations could cause an embarrassment to the party that is eyeing revival ahead of the 2019 polls. The humiliating defeat in the 2016 Assembly elections and the rout in RK Nagar elections forced Stalin to undertake a rejig of the party apparatus. The revamp is aimed at bringing in a change from the grassroots levels and strengthening the party to face polls. 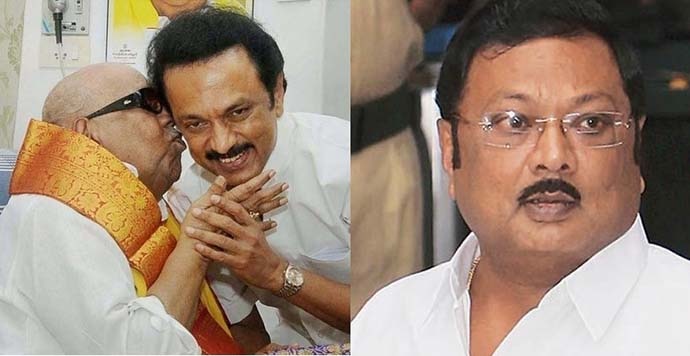 Point of no return? Stalin is the non-working president of the DMK, Alagiri said at a wedding gathering last week.

Even though the party does not have a strong face in Madurai, the cadres of the region have rallied behind Stalin in absence of Alagiri. There has been no revolt against Stalin’s decisions.

Will the situation change now as Alagiri has dropped hints of reclaiming his ground?

The DMK remains unfazed. The party said that AIADMK is a much stronger opposition than Alagiri. Party spokesperson TKS Elangovan said, "An angry and frustrated man speaks like Alagiri. It’s due to these outbursts he was expelled from the party. Alagiri is not a threat to the party”.

Political analysts rule out a patch-up between the brothers and opine that Alagiri is a spent force in the DMK. Radhakrishnan, a senior journalist, observed, "Alagiri is a power on decline. That's why he is forced to make some noise to stay relevant within the party".

Sumanth C Raman, a political analyst, however, is not dismissing the possibilities of Alagiri's re-entry into the party. "While it will certainly add some clout in the southern district where the party is weak, it will really depend on the terms on which he will be welcomed".

From Vijayakanth to Kamal Haasan, the temple town has been a political launch pad. The caste factor in Madurai is the key to electoral success.

The AIADMK benefitted largely from the support of the Thevars, a politically dominant community. Alagiri’s brute way had earned success for the DMK here.

With one year to go for the Lok Sabha polls and several new political players in the fray, the temple town of Madurai will see an interesting battle.

Post your comment
#Alagiri, #MK Stalin, #2019 Lok Sabha elections, #DMK
The views and opinions expressed in this article are those of the authors and do not necessarily reflect the official policy or position of DailyO.in or the India Today Group. The writers are solely responsible for any claims arising out of the contents of this article.