Winning more state polls is the only mantra for the BJP-led alliance if it wants to gain majority in Rajya Sabha.

The winter session of Parliament started on November 26. The Opposition, buoyed by the poor showing of BJP in Bihar polls, is all set to corner the government on a host of issues ranging from rising intolerance to rising prices of essential commodities. The fate of the important GST Bill also hangs in balance. If the government wants to implement it from April 1, 2016, then it has to be passed in this session.

A paradox of Houses

The BJP-led NDA, which got a thumping majority in Lok Sabha polls held in May 2014, won 335 of the 543 seats and the UPA, which bagged only 63 seats. Yet, the NDA got a rude shock in Parliament when most of its major bills got stuck in the upper house where it is in a minority. It had to take the Ordinance route for important bills like Land Bill and Insurance Bill. In Rajya Sabha, NDA strength is only 63 out of 245 seats while UPA has 88 members.

While in Lok Sabha, NDA accounts for 62 per cent of seats, in Rajya Sabha it's just the opposite - UPA and anti-NDA parties' account for 59 per cent of the seats. This makes carrying on the proceedings of Rajya Sabha much tougher. Every Bill passed by Lok Sabha has to be passed by Rajya Sabha as well and here NDA is seen struggling. While NDA accuses UPA and other regional parties of blocking the development agenda, the Opposition accuses NDA of not taking into account their suggestions. Both sides have pinned the responsibility/blame of the functioning/non-functioning of the House on each other. 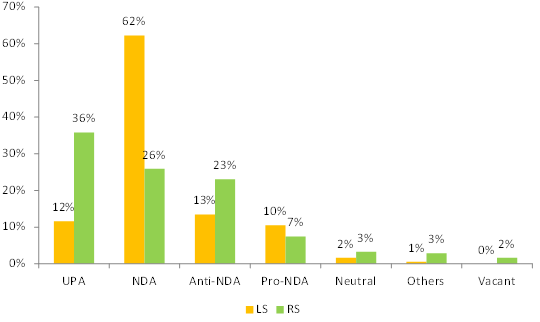 Percentage of MPs in Lok Sabha and Rajya Sabha

1. JDU is considered as part of UPA as it is sharing power with Congress in Bihar. Also NCP.

2. AIADMK and Biju Janata Dal (BJD) are considered as pro-NDA parties. This can be debated. However, these parties have made a conscious effort not to be on the side of Congress in the past decade.

3. Nominated members in Rajya Sabha have been classified as neutral.

Rajya Sabha members are elected by the representatives of the state Assemblies. They are elected for a tenure of six years and one-third of these members retire every two years. As selection of Rajya Sabha members is based on proportional representation in state Assemblies (very simply put), the party which is in government in the state is able to send majority of the Rajya Sabha MPs elected from the state (assuming no cross party voting).

To win a Rajya Sabha seat, a candidate should get a required number of votes. That number (quotient) is found out using the below formula.

For example, five RS seats in Bihar are due for elections in 2016. There are 243 members in Assembly and UPA (Mahagathbandhan) has 178, NDA 58 and others have seven seats. Number of required votes to win a seat is 243/6+1=41.5. Since NDA has 58 seats, one of its candidates will be able to get 41.5 votes and NDA will manage to win one and UPA four seats (assuming no cross votes).

Why is NDA a minority in Rajya Sabha?

The below graph explains why NDA is in minority in Rajya Sabha. Top 12 states account for 173 seats (71 per cent of the total strength). Out of these only five states are run by NDA governments accounting for 62 seats (26 per cent of total seats). NDA doesn't have a single MLA in Tamil Nadu, West Bengal and Kerala. The loss in Bihar (decline of MLAs from 91 to 58) has acted as a setback to its efforts to gain majority. Is this likely to change in the near term?

Without a majority both in Lok Sabha and Rajya Sabha, NDA will not be able to implement its agenda. All hopes of NDA and its supporters hinge on the fact that NDA will be able to increase its strength in the upper house when existing members retire and seats come up for re-election. 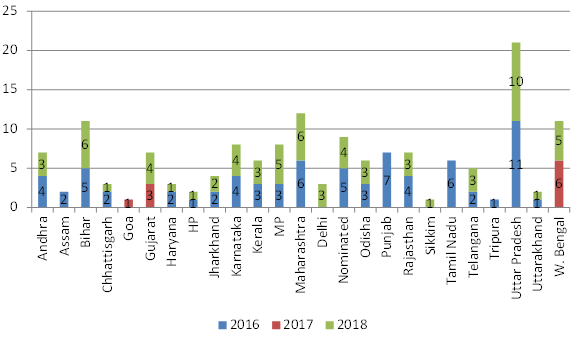 State wise Rajya Sabha MPs due for retirement in 2016-18

What complicates matters further is the fact that 14 big states (excluding small Northeastern states) will go for polls in these next three years - Assam, West Bengal, Tamil Nadu and Kerala (2016), UP, Uttarakhand, Goa, Punjab, Gujarat and Himachal Pradesh (2017); and Karnataka, Madhya Pradesh, Chhattisgarh and Rajasthan (2018). The selection of the new Rajya Sabha members would also depend to a certain extent on who forms the new government in these states. NDA is not in contention in three states - West Bengal, Tamil Nadu and Kerala. Three states - MP, Chhattisgarh and Rajasthan - go to polls in December 2018 and it won't matter who wins, as the elections to the Rajya Sabha seats will happen before that.

In the next three years, 154 MPs are due for retirement, of whom 43 are from NDA. Twenty NDA MPs are due to retire after 2018. The gains of NDA are expected to come from Maharashtra (+5), Andhra Pradesh (+1), Assam (+1), Goa (+1), Jharkhand (+1), West Bengal (+1), Odisha (+1) and Rajasthan (+3). NDA is expected to lose one seat each in Karnataka and Telangana. Even if BJP wins Uttarakhand, Goa, Punjab, Gujarat, Himachal and Karnataka it won't impact the seat position much in Rajya Sabha as majority of the MPs retiring from these states already belong to NDA. This takes NDA tally to 75. If it wins Uttar Pradesh then it can bag additional five seats, taking the NDA tally to 80.

Likely position before country goes to polls in Lok Sabha 2019 is expected to be as follows:

With no respite from this logjam, NDA has to get used to this and accept it as a fact of life. Of course there will be frustration but this is a learning for NDA, winning Lok Sabha is as important as winning state elections. They have lost Bihar. They should try to retain BJP ruled states due for elections in next three years and win Assam, Karnataka and Uttar Pradesh. They should also try to improve and win seats in Tamil Nadu, West Bengal and Kerala.

Though, it's not likely to make a big difference in the near term, it will at least build a foundation in the long term if it manages to win again in 2019 and help to win more seats. Between 2019 and 2021, 39 seats from these states will be up for grabs and BJP currently has only two. Keeping on winning the states is the only mantra for BJP if it wants to gain majority in Rajya Sabha.

#Rajya Sabha, #Narendra Modi, #Rajya Sabha
The views and opinions expressed in this article are those of the authors and do not necessarily reflect the official policy or position of DailyO.in or the India Today Group. The writers are solely responsible for any claims arising out of the contents of this article.