The unease of doing business in Narendra Modi's India

World Bank report hiking up India's rankings in fact highlights worrying gaps and inconsistencies in the govt attitude towards poverty, jobs and progress.

Last week, the World Bank released its report on the ‘Ease of Doing Business’ to much fanfare from the Modi government. In this report, India has moved up from being ranked 100 to 77 since last year. It is small consolation though at a time when businessmen face unprecedented threats and intimidation reportedly from various government departments like income tax and enforcement. Tax terrorism is now apparently part of Mr Modi's governance philosophy — but the World Bank report is understandably silent on it.

While the Modi government and their pliant friends in the media rushed to celebrate this achievement, one couldn't help but wonder about the eloquent silence being maintained on two other equally important developments that painted a far more accurate picture of the state of our nation. 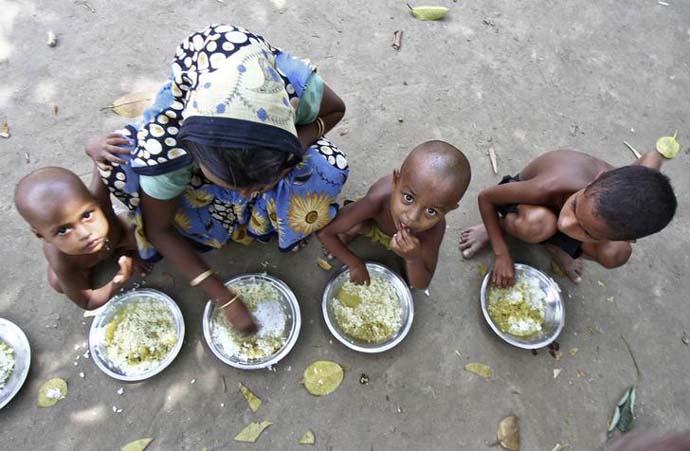 Business aside, these children's ease of accessing food has not improved. (Photo: Reuters)

Second, the 'Multidimensional Poverty Index’ Report prepared by the Oxford Poverty and Human Development Initiative (OPHI) at the University of Oxford in collaboration with the United Nations Development Programme (UNDP) was published in September.

The report highlighted a remarkable 50 per cent reduction in the levels of absolute poverty across all states in India. When it was published, it was hailed as an unprecedented achievement, without any comparable parallel anywhere in the world.

Surely, the Modi government and the media should have celebrated this achievement as well. Unless, of course, it would fuel their already blazing inferiority complex vis-à-vis the Congress. Yes, poverty has reduced in India — but under the UPA. (Photo: Reuters)

One interesting finding relates to Gujarat when Mr Modi was a ‘model’ CM. It is one of just seven major states that have achieved less than 50 per cent reduction in multidimensional poverty over the ten-year period in question. To put this in context, Gujarat under Mr Modi performed below three other states that started at the same poverty level (39 per cent) in 2005-06: Haryana, Maharashtra and Uttarakhand.

While the latter of these two reports paints an encouraging picture, the fact that the government has chosen to ignore and bury the findings is a cause for worry.

Largely because it highlights the Modi government's pettiness in apparently refusing to learn from or emulate the successes of previous governments.

Sadly, this leads to only one inference — that if it isn’t a scheme that he can rename or repackage, Mr Modi is not interested.

Therefore, to declare absolute success on the basis of an ‘Ease of doing business’ survey is misplaced.

The ready embrace of the World Bank’s endorsement is also somewhat ironic.

In March this year, the Modi government and its talking heads were quick to rubbish the legitimacy of the World Bank’s findings when it found the Goods and Services Tax to be one of the most complicated taxes in the world.

The World Bank had also found that the tax rate was the second highest of 115 countries with a comparable indirect taxation mechanism.

Furthermore, and not to be uncharitable, but the World Bank Report does not, by its own admission, present a ‘macro’ and holistic picture of a country’s economic affairs.

The methodology confines itself to two cities, Delhi and Mumbai.

Earlier this year (in February), I had given a statement in the Rajya Sabha on the government’s overreliance on the ‘ease of doing business’ findings published in last year's report.

The rise in the rankings, I had pointed out, was only due to a changed criterion used for measuring the performance of various countries — to present it as a miraculous commentary on the standard of governance was disingenuous.

In fact, Paul Romer, Chief Economist of the World Bank, had resigned, questioning the political motivations behind such rankings. He won the Nobel Prize for Economics this year. To cite an example, last year’s increase was attributed to the passage of a new law on insolvency and bankruptcy — but the reason it contributed to an increase in rankings was because it allowed for a ‘hire and fire’ policy.

This is not something desirable in a country where employment is literally the biggest issue facing us currently. Furthermore, the findings completely excluded the rural economy and agricultural growth.

Some of these shortcomings were echoed in a 2017 report prepared by the Niti Ayog and IDFC, on the ease of doing business as well. The report also pointed to a significant divergence from the World Bank’s findings on criteria, such as starting a business and getting an electricity connection. The Modi government was quick to distance itself from the findings, claiming it did not represent “official views”.

When compared with our lack of progress in combating hunger (especially for children below five years of age) or in continuing the works of previous governments in making poverty alleviation a priority, this government's report card is abysmal.

Progress to be meaningful must be progress for all.   All things considered, Mr Modi must remember that he was not elected solely to govern the citizens of New Delhi and Mumbai.

Post your comment
#Economy, #Global hunger index, #Narendra Modi, #World Bank
The views and opinions expressed in this article are those of the authors and do not necessarily reflect the official policy or position of DailyO.in or the India Today Group. The writers are solely responsible for any claims arising out of the contents of this article.