Wrong on Rites: Kashmir often sees reports of Muslims helping with Hindu last rites. There is a need to halt this 'same story trend'

J&K media should stop spreading propaganda on how Kashmiri Muslims help the Pandit community on rituals of death. This only covers up how KPs are treated in life.

Every few months in the Kashmir Valley, one news report re-surfaces across media. It is titled along these lines somewhat: ‘Last Hindu died and funeral rites arranged by Muslim neighbours — a sign of Kashmiriyat’.

Such heartening reports always mention similar quotes and the same demographics. Only the names and the location are changed, as per incident.

It is pertinent to ask then — who benefits from such a story, repeated occasionally, but deliberately?

The dead have gone and minority groups are conspicuous by silence, so who are these stories representative of?

In the past two years, seven “only Kashmiri Pandits” passed away across the region. A reminder about solitary families existing in the Valley. And a deserving question should be asked of how did the numbers fall so low. Once a vibrant community, the Kashmiri pandits have been pushed to the margins of life in Kashmir. (Credit: PTI photo)

But the focus instead is on the Muslim  community’s effort for the last rites rather than the people who died. This is not an isolated case but indeed, an increasing trend to claim credentials of bonds between the two communities — a charade that was in fact ripped away after 1989.

The predicament is not that the media reports mention an incident, but the cringe-worthy selective exaggeration to highlight an agenda on a loop. Is this an attempt to whitewash the Hindu exodus that was brought about by Jihadi extremists in the 1990s? The Kashmiri Pandits were forced to leave their own home, their own state. No one has helped them return. (Credit: PTI photo)

A turmoil handled irresponsibly by a callous government continues to show its impact 29 years on. Due to the absence of a narrative in intellectual discourse, outrage over the forced exile of the Kashmiri Pandits has turned to murmurs — eventually fading away.

It is understandable that distraught neighbours, having grown up with one Hindu family around, would rush to help and assist after an elderly person's demise. It is a fact acknowledged by most Hindu families in Kashmir that Muslim neighbourhoods are helpful during celebrations and solemn occasions. Especially during deaths, their neighbours console Hindu locals and ensure that a grieving family is not left alone.

But to blow this aspect of camaraderie as a trumpet for secularism is a tragic reflection of the dominating majoritarian view.

In one case from Srinagar in 2018, reports surfaced that an old Hindu woman had died and in the absence of her own relatives, she was cremated by members of the majority community. This was a lie.

The reality was that the woman’s husband and adult son lived in the same house and conducted the rites, as per traditions. The family was joined also by other Kashmiri Pandits (KPs), who arrived soon as the information spread. Most Muslim neighbours, though, were the first to reach their house and ensure all required items were arranged, in this hour of grief. The families had known each other for decades, so empathetic neighbours ensured their presence, reflective of a sweet but an expected humane gesture.

How did these facts, of a mere presence and assistance, transform into claims of 'implementation', of actually conducting the last rites?

I spoke to this specific family after the incident and a male member was deeply upset of how their grief was used to score brownie points for Kashmiriyat. He even raised a counter — but his view was never published.

This has happened earlier too.

In 2016, a news agency reported from the Malvan village of south Kashmir’s Kulgam district about the death of an old man, Janki Nath. Similar references were attempted and the report went viral with appreciative responses.

Fortunately, an alert Kashmiri journalist decided to collect facts and put forth a counter column, debunking such lies and propaganda. Like the previous case, there were enough local Hindu residents at the site — a fact the news agency report missed, but which was raised in the counter column.

In an incident in December 2017, in South Kashmir’s Lewdora village, it was widely reported that four orphaned Hindu children in a village had been taken into foster care by Muslim neighbours. The ostensible reason was an absence of their community's outreach. One report even stated, 'This story reaffirms the centuries-old bond shared between Hindus and Muslims of Kashmir'. Why was it necessary to signify the 'reaffirmation'?

Also, the details were only partially incorrect.

In fact, when the children's mother was still alive (the father had died), the cultural customs of two boys were carried out by a local KP activist group, based in Srinagar, who performed these at the Ganpatyar temple. The Ganpatyar temple is one of the noted places Kashmiri Pandits perform their rituals. (Credit: www.shehjar.com)

Why then was there this need to whitewash the KP involvement in taking care of their own, and insist this was done only by local Muslims?

Many Kashmiri Hindus based in the Valley have tried to raise objections at the local level against this trend — but they lack platforms at the national level. There is also a looming fear about disclosing their identity due to a lack of political support. Many residents have now even given up hope that such propaganda may ever halt.

Sadly, stories of discrimination, threats, loneliness and the lack of reservation quotas get played down — in fact, these rarely make headlines.

Three months ago, Qazigund in Anantnag district witnessed the death of an old Hindu man. The cremation had to be performed by a Srinagar-based resident, who rushed to the site. This was an important incident because it projected the difficulties faced by religious minorities during such times.

One of the main priests for Kashmiri Pandits was Ratanlal, who used to go across the Kashmir Valley conducting last rites. He died three years ago and is deeply missed by the community. In the absence of a qualified priest, the inconvenience faced by the populace deserves to be highlighted.

Instead, death is used as a propaganda tool to show 'communal harmony'.

What sort of moral grandstanding is it not to highlight the voices and concerns of a miniscule minority when they are alive — but pen down glorious pieces on their death, only to propel the majoritarian view?

Such attempts must embarrass all compassionate people.

Kashmiriyat needs to emerge from a paradigm of empowerment in education, employment and empathy. An appropriate way to express secularism is by ensuring access to opportunities for the minority community that records low numbers and a non-existent narrative.

Instead, Kashmiriyat is projected by throwing flowers on mortal remains, when they turn into ashes.

Kashmir is a conflict where all communities are suffering at present, where each gender is confronting a turbulent future. But the minorities, to make matters worse, have no avenue to address their grievances.

Census data of 2011 shows the Hindu minority in the state of Jammu and Kashmir stand at about 28.44%. In the Kashmir Valley, shockingly, the numbers stand between 1-3%. In some areas, the numbers stand in fractions, where the same people once had a visible presence. 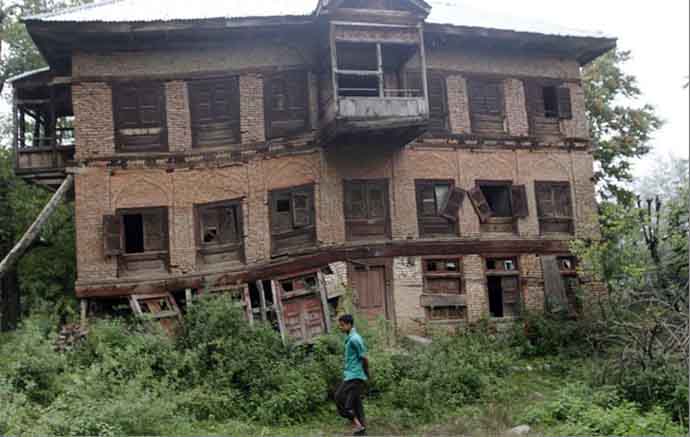 Once upon a time, this was home to a Kashmiri Pandit family.  (Credit: India Today)

India’s civil society has usually seen the Kashmir conflict from the eyes of state vs citizen. But the micro-level details are more disheartening as minority groups tend to face intimidation, communal undertones and even suggestions to convert their faith. Testimonies often cannot be recorded but it does not mean everything is normal.

Also, Jammu and Kashmir does not boast of a strong minority face as an elected representative — and thus, voices remain absent.

The Bharatiya Janata Party (BJP) made a strong pitch for Kashmiri Hindus — but the result was zilch. Neither did a process of rehabilitation begin at any promised scale, nor did the ones staying back receive any reprieves. The government broke ties three years into power with the People’s Democratic Party (PDP). A number of posts were announced in government jobs but an ongoing legal tussle blocked that possibility too. Their promise to help Kashmiri Pandits return turned out to be totally hollow. (Credit: PTI file)

The least one could now do is encourage minority voices to speak and demand their rights in Kashmir. There need to be warm signals to welcome the rehabilitation of displaced Hindus.

Instead, separatists lead protests, alleging Israel-like conspiracies if a few cluster settlements are made for Pandits. 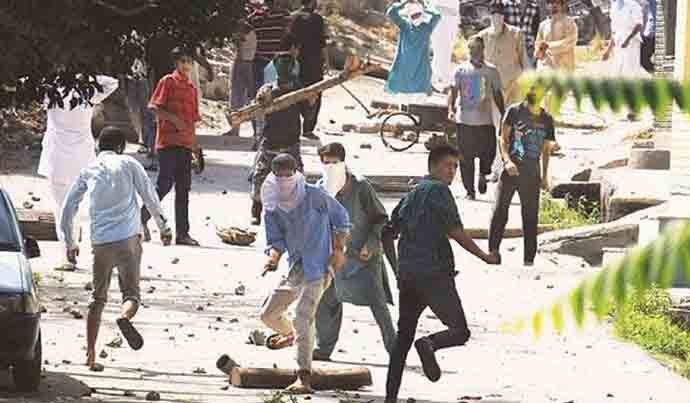 Some of those rocks are meant to hurt the Kashmiri Pandit cause too. (Credit: PTI)

Amidst reducing numbers, the campaign ought to be for Hindus and Sikhs residing in the Valley, trying to live their lives with safety and dignity — rather than praising the dead, the voiceless, the nameless.

#Army, #Kashmir muslims, #Jammu and Kashmir, #Kashmiri Pandits
The views and opinions expressed in this article are those of the authors and do not necessarily reflect the official policy or position of DailyO.in or the India Today Group. The writers are solely responsible for any claims arising out of the contents of this article.