No one has ever heard of any 'ban' on celebration of the festival at police stations, so why else would he rake up the issue if not to divide communities?

Ever since Yogi Adityanath became chief minister of India’s most populous state of Uttar Pradesh, his acts and statements have not only sparked controversies but also caused serious concern in matters relating to civil liberties and social harmony.

In keeping with his inimitable ways, the other day he once again kicked up a storm by drawing an uncalled for comparison between Eid “namaz” and Janmashtami celebrations.

“When I cannot stop Eid ‘namaz’ on the roads, how can I stop Janmashtami celebrations inside police stations?” he asked out of the blue, while addressing a public function in Lucknow on Thursday.

The remark was totally unprovoked as no one had even remotely suggested anything against celebration of Janmashtami in UP’s police stations and police lines.

The celebration of the festival in most police stations and police lines of many districts is an old tradition that is being followed for decades. And significantly, Muslim police officers have always sincerely carried out the annual ritual with the usual enthusiasm and their families make it a point to visit the “jhankis” put up on the occasion.

In all these decades, no politician ever tried to make an issue out of it. Yet, Yogi Adityanath went about accusing the previous Samajwadi Party government and former chief minister Akhilesh Yadav of “banning” the celebrations on Lord Krishna’s birth at police stations.

No one has ever heard of any such “ban”. And if at all it was done secretly, one wondered why the BJP and an aggressive Hindutva leader like Yogi Adityanath did not care to raise a voice in protest?

Sure enough, Akhilesh made it a point to issue a strong objection and clarification at a specially convened press conference on the following day. He wondered if the allegation about his “banning” the Janmashtami celebrations at police stations was a design for inciting communal violence.

The former CM recalled attending each of the Janmashtami celebrations at Lucknow’s police lines together with the Governor and other senior officials, which has been a convention for decades.

One could only recall a ban on DJs during the “kaawariya” (devotees of Lord Shiva) yatra in the month of Sawan (as per the Hindu calendar). It is therefore mind-boggling why a responsible chief minister should be making a statement based on a false premise.

Either Adityanath is ill-informed or ill-intentioned. In both cases, it could be dangerous for a state of 22 crore people. 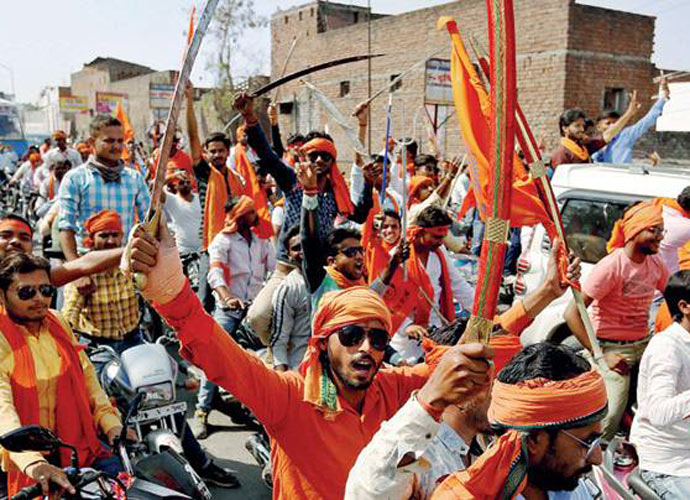 Yogi Adityanath's Hindu Yuva Vahini has sown the seeds of communalism in eastern UP. Photo: Reuters

It would have been understandable if the statement had come from the erstwhile Yogi, the undisputed head of a temple trust and “math” who could get away with anything.

The “Janmashtami-Eid” statement coming at that point of time would not have evoked such serious concern at it is doing today. That Yogi was expected to be talking in those terms because that was characteristic of him.

Provocation in the name of religion was his forte and had taken him far beyond the limits of the centuries-old “mutt” he was heading. It was on the strength of his hardcore Hindutva identity that he had managed to bulldoze his way five times to Parliament.

The Hindu Yuva Vahini - virtually seen as his private army - was well entrenched in large parts of eastern UP where it had systematically sown the seeds of communalism and forged a sharp divide between Hindus and Muslims.

Thanks to Yogi’s patronage, the Vahini acquired a status that even a national Hindu organisation like the Vishwa Hindu Parishad (VHP) could not achieve in the region. And with that came its nuisance value that even a strong BJP could not afford to challenge.

More often than not, the Vahini chose to field parallel candidates in state elections. And it also came in handy for Yogi to bargain for election tickets to his nominees.

It was his aggressive role as the Vahini supremo that led him to make such a provocative speech that landed him in jail. And the melodrama that followed was clearly aimed at earning brownie points as some kind of a martyr.

Tears rolled down his eyes in the Lok Sabha as he narrated his tale of woe against the Samajwadi Party government of the day. He did sober down for a while. And once in the chief minister’s office, he was compelled to exercise restraint on his tongue.

However, it seems that Yogi’s inherent aggression often overtakes him and perhaps what was witnessed on Thursday at a public function in Lucknow was just another manifestation of that hardcore Hindutva.

Could it be without realising the implications of the statement? If not, could it be a design to provoke? And provocation could help him divert the attention of the nation from the unpardonable deaths of children in his hometown Gorakhpur - simply because someone in his government was sitting over release of payment to the oxygen supplier who heartlessly unplugged the supply of the crucial live-saver at a state-run hospital.

The Yogi is drawing a lot of flak for the deaths of over 70 kids caused by negligence - which he has been desperately trying to term as “fake news”. But the heat and dust raised over the virtual massacre in Gorakhpur does not seem to die down.

Maybe a divide between two communities could take the spotlight away from the gory deaths and give some respite to the chief minister who continues to live in denial mode.

What he is really up to remains a million-dollar question.

#Gorakhpur hospital tragedy, #Janmashtami-Eid, #Yogi Adityanath
The views and opinions expressed in this article are those of the authors and do not necessarily reflect the official policy or position of DailyO.in or the India Today Group. The writers are solely responsible for any claims arising out of the contents of this article.