Why Adityanath as CM makes seculars and Congress uncomfortable

They should not forget he has emerged as a seasoned politician, as much as a practising priest.

The selection of Yogi Adityanath as UP chief minister has shocked many.

Like many, I too am uneasy to see sadhus mixed up in politics just as mullahs and padres talking politics makes me uncomfortable.  But I refuse to be prejudiced.

The mainstream English media, which has grown simultaneously with the amorphous secularist ideology of the Congress party, see doomsday looming with the elevation of a Hindutva archpriest as the chief minister of India's most populous state.

Forgetting the Gorakhpur MP is a leader on his own merit, with loyal followers, they tend to blame Narendra Modi for Adityanath's rise.

They do not seem to factor in Modi's own limitations in exercising monolithic control over the BJP's decision-making process. 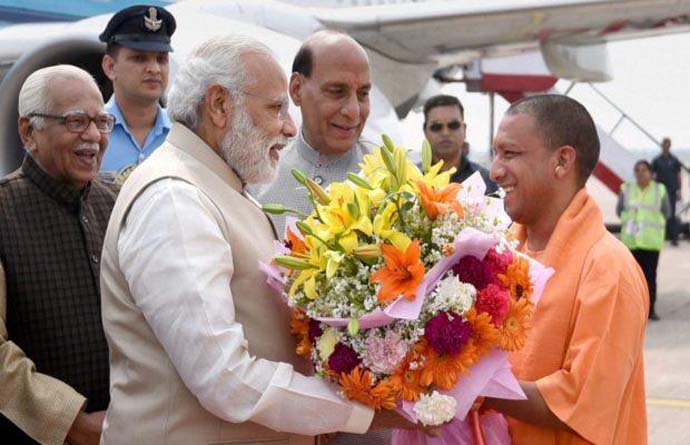 Forgetting the Gorakhpur MP is a leader on his own merit, with loyal followers, the Opposition tends to blame Narendra Modi for Adityanath's rise. Photo: PTI

Modi is probably ready to trade off his stand on some issues, as long as they serve the larger interests of the party without compromising his overall strategic agenda.

Some of the contradictions between what Modi says and how he acts would indicate this.

Probably, Modi had to go with the selection of Adityanath as the chief minister, because the Gorakhpur MP's electioneering skills contributed hugely to the BJP's resounding victory in the Assembly elections.

Perhaps, this was also the reason for the overwhelming support Adityanath enjoys among the UP BJP leaders and the MLAs.

The opposition does not seem to bother to understand why the BJP opted for Adityanath as the chief minister.

They only see him as a rabble-rouser preaching the gospel of hate.

This only indicates their failure to understand the popular backlash in the state against the Akhilesh government's pro-Muslim tilt, ignoring the needs of the majority.

This is what caused their failure in the UP polls, not the saffron-clad Adityanath's vitriolic speeches.

We saw the same syndrome - failure to read the public mood - in Assam too, where people opted for BJP, though the party was a non-entity in the state before the Assembly polls.

Mamata Banerjee is also making the same mistake in West Bengal; in her case, it is fast becoming a national security concern as the state has become a refuge for Islamic extremists escaping the crackdown against them in Bangladesh.

Even the Bangladesh government has expressed its concern in this regard.

The basic problem of the opposition is its understanding of the RSS. It is popular for them and the intellectual class to accept the Left-leaning forces' description of the Sangh as a fascist force.

Of course, the Left has conveniently forgotten its own ideology is wedded to the proletarian dictatorship owing to the socio-democratic cloak it now wears like the proverbial wolf in Red Riding Hood.

The RSS is a cadre-based conservative religious organisation wedded to propagate Hindutva, a concept it believes should apply to the people of India.

In spite of the popular branding of RSS, during my military service in disaster-hit areas, I had seen RSS cadres working hard to help the affected, irrespective of their religion.

Of course, the RSS has its organisational rigidity; I have my doubts whether its set-up is democratically-elected.

But in this country, few political parties function democratically.

Perhaps, they are following the Mahatma's tradition of dictatorially conducting the Congress party's affairs.

Following the same tradition, the Congress party now pays obeisance to another set of Gandhis, who continue to call the shots, despite their repeated leadership failures.

Just as the Gandhis are above the others in the Congress, in Samajwadi Party, it is Mulayam Singh Yadav and his clan.

And about the Dravidian parties' sycophantic traditions, the less said the better.

The opposition fears the RSS because it challenges their so-called secularist political style, based on the "vote bank" politics of dishing out favours to Muslims and Dalits to keep them in their flock.

This clouds the judgment of the Congress party (and its regional copy cats) and other pseudo-socialists like the SP in making an objective assessment of the RSS and its umbilical relations with the BJP.

But it listens to the RSS when it suits the party, as is the case in UP.

Adityanath, despite his strong RSS pedigree (much like Modi), has shown he has fully imbibed BJP's political pragmatism as shown in his Cabinet formation.

While assessing Adityanath, the opposition should not forget that the UP chief minister has now emerged as a seasoned politician, as much as the practising priest that he is.

Also read: Why is SC passing the buck in the Babri Masjid-Ram Mandir case?

#Hindutva, #BJP, #Uttar Pradesh CM, #Yogi Adityanath
The views and opinions expressed in this article are those of the authors and do not necessarily reflect the official policy or position of DailyO.in or the India Today Group. The writers are solely responsible for any claims arising out of the contents of this article.