Yogi Adityanath's own people are dragging his reputation down in UP

Two recent incidents of violence have raised questions over his prowess as an administrator.

The first was the ransacking of the office of Saharanpur senior superintendent of police (SSP) by none other than local BJP MP Raghav Lakhanpal Sharma and his cohorts — party MLAs Brijesh Singh and Pradeep Choudhary .

The second incident was the assault and arson at the Fatehpur Sikri police station by activists of the Hindu Yuva Vahini (HYV), widely known as Yogi’s “private army”, whose influence seemed to have grown overnight from one corner of eastern UP to large parts of the state, where it was trying to usurp the role of a self-styled police force.

The chief minister was understood to have summoned the concerned MPs and MLAs as well as his Hindu Yuva Vahini activists involved in the two incidents. Sources close to Yogi claimed that the errant leaders were chastised by him and warned not to take law into their own hands. However, fact remains that the interaction between the CM and the culprits was limited to lip service, which the latter evidently did not pay much heed to. 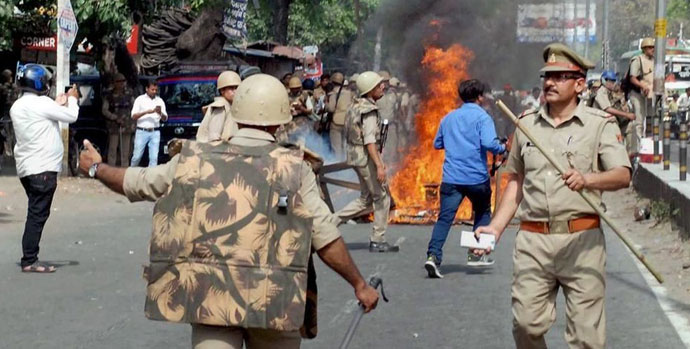 The incidents of violence have put a big question mark on Yogi Adityanath’s prowess as an administrator. (Credit: PTI photo)

Even as FIRs were registered in both the cases, no action has been taken against the accused leaders so far. The incidents have put a big question mark on Yogi Adityanath’s prowess as an administrator.

Surely, the visible docility of the Yogi administration comes in sharp contrast to Mayawati’s handling of a similar situation, while she was heading the Bahujan Samaj Party (BSP) government between 2007 and 2012. No sooner than she saw a TV report showing then BSP Lok Sabha member Uma Kant Yadav assaulting poor villagers in a bid to grab their land, she summoned him to his residence next morning. And after the MP arrived in her waiting room, she rang up director general of police Vikram Singh to get him arrested from her residence.

It became the biggest story of the season. Never before had any chief minister displayed such firmness in dealing with vandalism led by a politician and that too a sitting MP of the ruling party. The drastic action against a single goon led the smaller fries to go underground while driving home the point that the chief minister would brook no nonsense from anyone.

What followed was even more incredible. Even though Mayawati went about "plundering" the state with impunity, she earned much praise from all quarters. People were willing to condone the rampant corruption at the highest level because they felt, ”life for a common man was much safer in Mayawati’s regime as criminals — no matter how high and mighty — were not allowed to get away with murder".

Conversely, Akhilesh Yadav drew much flak for turning a blind eye to criminals, especially if they enjoyed patronage of some member of the ruling Yadav clan. Even the good work he did on the development front got clouded because of his reluctance to use an iron hand in dealing with crime.

That is why it was extremely important for Yogi to show his mettle in dealing with the lumpen elements, who were virtually cocking a snook at his authority. Evidently, Yogi had surprised all his critics by rising well beyond the image of a Hindutva rabble-rouser that he had cast for himself in his erstwhile days. But all the brownie points he has earned over the past seven weeks that he has been in power, could go down the drain if he failed to bring to book the defiant and the insolent who cared two hoots for the law of the land.

Mere routine warnings — “we will not allow anyone to take law into his hands” — will serve no purpose if these are not followed up with meaningful and deterrent action. Concrete steps alone will send the message loud and clear to all and sundry that the saffron-clad chief minister actually means business. If he allows his own “iqbal” (aura) to be eroded by his own saffron ranks, he would not be taken seriously, which may ultimately dent the credibility he has earned by dint of his other truly objective moves.

Also read: Why I believe Yogi Adityanath as UP CM reflects maturing of Indian democracy

Post your comment
#BJP, #Hindu yuva vahini, #Uttar Pradesh, #Yogi Adityanath
The views and opinions expressed in this article are those of the authors and do not necessarily reflect the official policy or position of DailyO.in or the India Today Group. The writers are solely responsible for any claims arising out of the contents of this article.