What the three also have in common is their hatred for Narendra Modi, BJP and Hindutva. Why? This is not quite clear.

The last couple of years have seen the emergence of three youth leaders in India, Hardik Patel, Kanhaiya Kumar and Jignesh Mevani. What do they have in common? All of them come from disgruntled sections of our youth. They are all educated, with the sense of both entitlement and frustration that such education brings. To give them their due, they also seem to want, in their own ways, to improve things.

None of them is so oppressed or backward that they can be be part of India's dispossessed underclass. At the same time, none of them is so privileged that he need not work for a living or worry about his future.

Though they come from different castes, what binds them is the class solidarity of the newly urbanised and educated lower-middle classes, who want a better life but find themselves blocked by a corrupt or resistant system of dispensations.

Hardik, the youngest, is also the senior-most in public life. Born in 1993, he joined active politics in 2015 because his sister, Monica, failed to get a government scholarship in 2015. Her friend, who had a lower score, got in through the OBC quota. Hardik, therefore, formed the Patidar Anamat Andolan Samiti (PAAS), a non-political organisation, with the specific aim of getting the Patels OBC status. In the recent Gujarat elections, Hardik and his organisation came out in support of the Congress against the BJP. Arguably, he was one of the factors responsible for reducing the ruling party's margin of victory. 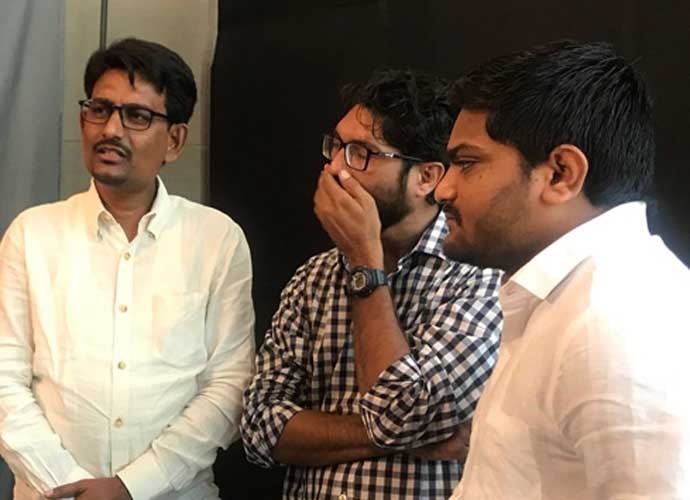 Kanhaiya Kumar, born in 1987, comes from Bihar, Begusarai, a traditional CPI stronghold in Bihar. He is a Bhumihar, member of an upper caste, land-owning community. Mayawati, speaking on Ambedkar Jayanti in 2016, was quick to fasten on this fact in labelling him "anti-Dalit".

True, Kanhaiya's own family owns some land, but his background is modest. He studied in an ordinary school and college, got his MA from Nalanda Open University, Bihar, before clearing the JNU entrance test.

Kanhaiya was elected president of JNU Students Union in September 2015 on an All India Students Federation (AISF) ticket, defeating his All India Students Association (AISA), rival, Vijay Kumar, by 1,029 to 962 votes. He shot to national limelight in March 2016 when he was charged with sedition in the notorious "Bharat tere tukde honge, Inshallah, Inshallah" JNU slogan shouting incident in February 2016. During his interrogation and subsequent interviews to mainstream media, Kanhaiya disassociated himself from the objectionable, "anti-national" slogans, affirming his full faith in the Constitution.

He also said that he believed that "Kashmir is an integral part of India".

On being released, Kanhaiya became a national darling and poster-boy of Left liberals. He is frequently invited for debates by leading national TV channels and is in demand as a public speaker. Briefly, he was also projected as the youth alternative to Narendra Modi, with JNU assumed to be the purported platforms for mobilising an anti-government movement. Despite sporadic protests on other campuses, the youth against Modi movement has come a cropper. Kanhaiya, though, has done well for himself. He was quickly commissioned to write a book, Bihar to Tihar: My Political Journey, published both in Hindi and English in October 2016.Jignesh, the oldest of the trio, was born in 1982. He belongs to a Scheduled Caste family. He is a BA, LLB, and his parents are reportedly government servants. He shot to fame by leading protests against the filmed and widely publicised Una atrocity in which alleged cow vigilantes publicly beat Dalits. Jignesh led the Dalit Asmita Yatra to Una from Ahmedabad.

The march concluded on August 15, 2016, in a rally attended by over 15,000. From his rhetoric so far, Jignesh comes across as an advocate of militant activism against caste oppression. But he is also quoted as saying that he will also fight for a poor Brahmin oppressed by lower-castes if the need arises. Jignesh was recently elected to the Gujarat assembly from the Vadgam reserved constituency in Banaskantha district.Though Mevani contested as an independent, he was supported by the Congress and the Aam Aadmi Party, also allegedly receiving funds from radical Islamic groups such as Popular Front of India (PFI).

What the three also have in common is their hatred for Narendra Modi, BJP and Hindutva. Why? This is not quite clear. Is it because their brand of politics has no future in a Modi-driven India? What is clear, though, is that none of them is a liberal.

They are all statist and interventionist, with Jignesh demanding land for each Dalit, Hardik reservation for Patels, and Kanhaiya still plumbing for socialism as a panacea for the masses.

The three youth leaders, despite their talents, thus represent regressive causes. The irony is that they, as well as their political patrons and ideological well-wishers, project themselves as progressive.

Standing for divisive caste/class politics, all three capture some degree of the frustration and resentment of our youth, without offering any viable alternatives.

Until they broaden their support base as well as their vision, they will remain single agenda leaders, with a limited draw at the electoral hustings.

Meanwhile, the seniors still rule the roost, which has always been the Indian way, since mythological times. In every contest between youth and old age, the latter wins - unless, as in the fight between Arjuna and Bheeshma, the former is permitted to defeat the latter.

Knowing this, the BJP would do well to nurture a cadre of youth leaders, which will take the party forward when this lot has done its job.

Post your comment
#Kanhaiya Kumar, #Hardik Patel, #Jignesh Mevani, #Youth politics
The views and opinions expressed in this article are those of the authors and do not necessarily reflect the official policy or position of DailyO.in or the India Today Group. The writers are solely responsible for any claims arising out of the contents of this article.