Telugu Desam Party’s self-proclaimed "national president" N Chandrababu Naidu sat in a protest for almost half a day at the Tirupati airport on February 28 and by the end of the day, he had left for Hyderabad from the airport itself. The police politely accomplished their task and Naidu’s protest dharna has been forgotten already. It was indeed hackneyed. Naidu repeated the act — protesting in the airport. And he did not realise that such “copycat” acts are boring and the cause is far too trivial for a person of his stature to take part. For some reasons, he has not been able to inject the necessary booster dose into his cadre after the terrible electoral loss at the hands of Andhra Pradesh Chief Minister YS Jaganmohan Reddy, whose political experience is just 12 years — no match to the 43 years of political career Naidu has.

“You are holding the (hands of a future) Chief Minister. It’s a matter of just two years. I will not forget anyone. I will remember everyone…” thundered Jagan, yelling at a police officer, on the Republic Day of 2017 when he was stopped at the tarmac from entering the port city of Visakhapatnam to participate in a candlelight rally in support of Special Category Status (SCS) for Andhra Pradesh. Jagan was the Leader of the Opposition then. He organised a sit-in then and there protesting the humiliation meted out to him and “usurping” his democratic right to participate in a rally.

And three years have passed since. Roles reversed. Jaganmohan Reddy, as he had predicted his own future, became the Chief Minister in May 2019 with a huge mandate. And, Chandrababu Naidu barely managed to become the Leader of the Opposition with a niggardly 23 MLAs.

And, as luck would have it, Jagan got the opportunity to make Naidu taste his own medicine, on February 27, 2020. Naidu wanted to participate in a Praja Chaitanya Yatra to “expose the corrupt practices” of the Jagan government. Though Naidu had warned the police he would not leave the issue, somehow it lacked the punch then. Finally, after a sit-in protest, he had left for Hyderabad without any noise.

Exactly a year later, on February 28, 2021, the same scene repeated in Tirupati airport. Naidu was prevented by the police from entering the temple town. Naidu was annoyed and protested by sitting in a protest. He came to Tirupati to participate in a protest rally by the TDP, as the party charged the YSR Congress with ransacking the tea stall of a TDP worker whose wife was seeking an election as a corporator, slated for March 10.

And, the “National President” of the TDP himself descended on Tirupati to participate in the protest.

The police refused him permission, citing the model code of conduct and also Covid-19 guidelines. While Naidu wanted to go and meet the District Collector and the Superintendent of Police, the police pleaded with him to cooperate with them. Though Naidu insisted that the police could accompany him and he was “not going to commit any murder”, the police did not relent.

A visibly perplexed Naidu sought to know if he did not have the “fundamental right” to meet the collector. In his flow of expressing his indignation, Naidu said: “I have worked as the Chief Minister for 14 years. I am the Leader of the Opposition. What is this? Why are you detaining me? You have not accorded permission to me… I will sit here. You do whatever you want.”

Naidu’s argument too looked puerile as the police officers were way too polite with a man who deserved all the respect. 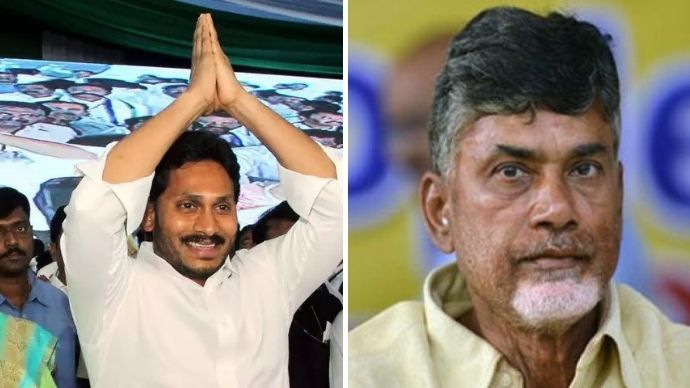 Jagan foretold his own future while Naidu spoke in past-participle. (Photo: PTI)

Against this background, why did both of Naidu’s protests lack fizz and why did Jagan’s roar at the airport-protest draw unusual attention? Simple. Jagan spoke in ‘future tense’.

Jagan issued a veiled threat to the police personnel who had physically stopped him on January 26, 2017, of “not forgetting anyone” when he became Chief Minster”. Whether he acted on the threat or not, is a different story. But, Jagan that day foretold his own future.

And Naidu spoke in ‘past tense’. By adding his earlier stint as the Chief Minister of undivided Andhra Pradesh, a visibly ‘tense’ Naidu unwittingly spoke about the past. At least for the sake of record or to jack up the sagging morale of his own party men across the state, he could have “warned” the police of serious consequences after his party comes back to power. His claims over the victory of 40 per cent of Panchayats in the recently concluded village panchayat polls too were so feeble that they disappeared in the proverbial thin air too soon.

With at least three MLAs, who won on the TDP ticket switching loyalties to Chief Minister YS Jaganmohan Reddy, if just another four MLAs cross over or appeal to the Speaker of the AP Assembly, Naidu would lose the status of the leader of the Opposition too.

Naidu, who had talked about Vision 2020, way back in his first stint in office as the Chief Minister in 1995-1999, somehow doesn’t sound hopeful of a comeback. The TDP was made to bite the dust in the Panchayat elections in the Kuppam Assembly constituency, Naidu has been representing for seven terms. This surely is a loss of face, and base, for Naidu. His detractors are already deriding that Naidu will have to scout for a “safer constituency” in coastal Andhra for the next elections.

The TDP seems to be on the cusp with Naidu losing grip over the politics he has been deftly playing for ages. Will he be able to resuscitate the party, which is on ‘ventilator support’ is something one has to wait and watch.

Also read | From Raja to Commoner Rank: Once AP CM, Chandrababu Naidu is today facing a huge reversal of fortune

#Telugu Desam Party, #Ysrcp, #YS Jaganmohan Reddy, #Chandrababu Naidu
The views and opinions expressed in this article are those of the authors and do not necessarily reflect the official policy or position of DailyO.in or the India Today Group. The writers are solely responsible for any claims arising out of the contents of this article.