Remember the Afghan girls' football team that fled because of Taliban? They are talking about the journey

A humanitarian flight helped them migrate to Portugal, where Muhtaj met the Afghan football team and surprised them. They are now talking about their journey as Muhtaj becomes their official football coach.

So humbled to share that we have successfully evacuated 80 members of the Afghanistan Youth Women’s National Team along with their family members to @Cristiano Ronaldo’s nation of Portugal. So thankful to work with such amazing leaders on this mission. https://t.co/XlOBjnkIBY

WHEN THE TALIBAN CAME

The Afghan girls were shocked when they heard the news about the Taliban forcefully capturing their country, especially when they entered Kabul with big guns and hundreds of soldiers. They knew how Taliban worked. The Taliban isn't the sort of government that allows higher education for woman, or let women walk hijab-less, let alone have young girls play football.

Initially, the girls surrendered to their fate. A teammate removed all her football posts from social media, while another was reminded of how her own mother had to leave school when the Taliban took over the country for the first time in the 90s. They had grown used to being judged by their relatives for playing football, since many Afghans were very conservative over letting girls play when they 'should have been doing the dishes'. Even though the national women's football team was made in 2007, their relatives still stuck to traditional values. But the girls were okay to be seen as 'the bad girl'. But having the Taliban take over meant nothing was certain and that they would probably ban women from sports again.

So, the girls decided to remain in touch over a WhatsApp group. 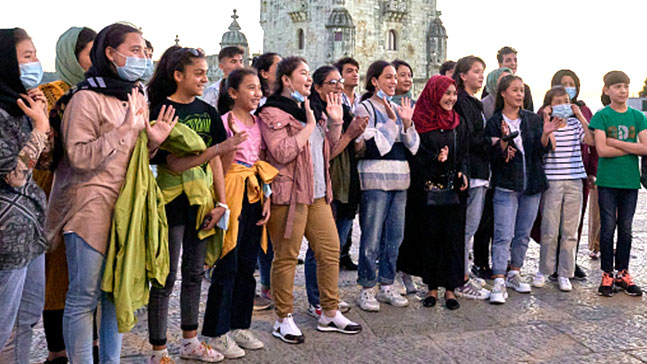 The Afghanistan Football Federation needed immediate help and so had to seek help from someone who understood the position of these girls, but who could also connect and get more help. Farkhunda Muhtaj was the answer. She was the daughter of Afghans who had fled during a similar Afghan takeover by the Taliban in the 1990s. She had recently graduated from the York University, and was a star athlete in Toronto, Canada. Once she was onboard, Muhtaj reached out to humanitarian groups and politicians in America and found help with creating rescue plans as the Afghan security collapsed.

Muhtaj joined the WhatsApp group and was in touch with the girls over voice and video messages, and the girls blindly followed her through the entire process. The girls filled forms and shared their passport details in hope of a fast rescue. But a few of their plans failed because of the countless blockages in their way - the girls could not reach the Kabul airport many times, there were suicide attacks, they had to keep low from the Taliban, and escape the gunfire. Plus they had to mourn the death of a fellow 17-year-old Zaki Anwari, a member of the men's football team, who had clung to the airplane bound for US, but had fallen to his death. So, the plans changed. The girls, along with only 3 family members, had to wait in a safehouse in north Afghanistan. Their wait ended up being a 20-day wait, where they slowly started to lose faith again. But in September 2021, they finally got on to a humanitarian flight as they clapped and cried at the same time.

Eventually, a second humanitarian flight got the rest of their families; and a total of 80 members were flown out of Afghanistan. When they entered Portugal, a country where temperatures are lesser than Afghanistan, the warm and friendly Portuguese natives shared blankets with them. The fact that it was the country of one of their heroes, Cristiano Ronaldo, gave them some faith that they could restart their lives. While Portugal provided free housing, US aid groups provided financial aid. The girls are now settling into a country where it's normal for girls to play football. They are learning Portuguese, enjoying picking up games, and are even competing with Portuguese football teams, who are praise the Afghan girls for their game. Meanwhile, Muhtaj, who helped rescue the team, is now the coach.

Captain of the Afghanistan women's team - Farkhunda Muhtaj, who is based in Canada, reunited with her teammates in Lisbon after Portugal granted them asylum. Every member of the team safely fled Afghanistan as the Taliban took power. Powerful images that transcend sport. pic.twitter.com/kPl9twpTl0

The girls, who have been through this whole ordeal together, are stronger and much more than 'just a team'. Though they might soon move to different towns where subsidised housing facilities are available and split for the first time since fleeing Afghanistan. The united Afghan Team with their family. Photo: AP