If sport is a metaphor for war, then hockey had proved to be India’s most trusted weapon in the troubled years after Partition. In the complex post-Independence context, prowess in sport wasn’t enough. Accomplishments had to be demonstrated in contests against the colonisers, which would mark a symbolic victory against the erstwhile colonial state and satisfy the insatiable national thrust for equality and revenge.

Yet again Balbir Singh Senior was central to the Indian campaign in 1952. At Helsinki, the Indians started their title defence defeating the Austrians 4–0. The performance, however, was at best scratchy and it was widely reported that the Indians had lost the edge which had won them four consecutive Olympic gold medals. "The Champions won, as they were expected to, but they found the Austrians no easy obstacle on a pitch rendered slippery by rain." 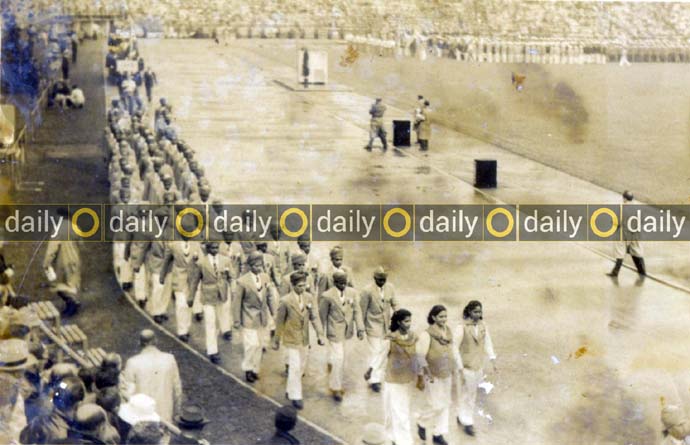 The march past by the Indian team during the 1952 Helsinki Olympics. (Photo: Author)

In their semi-final against the British, the Indians were a transformed side. This is how Balbir Singh Senior, who scored a hat-trick, his second in Olympic hockey, described the performance against Britain: “We were a completely changed lot in the semi-final against Britain. We moved swiftly and smoothly and scythed their defence with copy-book moves... It was an accident that I got that goal. But I scored two more before the interval to get my second hat-trick in Olympic hockey — my first was in my maiden appearance in the London Olympics. Britain reduced the margin (1-3), but that was all they could do. India had reached the final.” 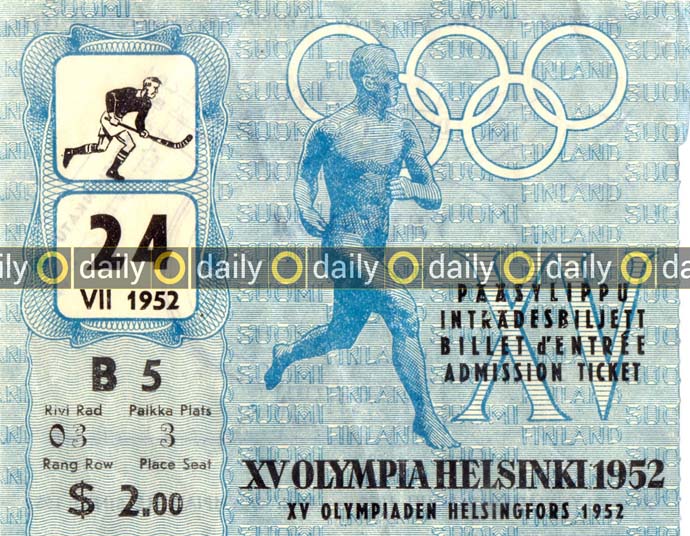 The ticket for the final hockey match at the 1952 Helsinki Olympics. (Photo: Author)

Even after a better Indian showing in the semi-final, the final against Holland was expected to be a close affair. This was because of two reasons. First, the rains had made the ground wet and slippery, conditions that were expected to favour the Dutch more than the Indians. Second, the Indians looked to be over-reliant on Balbir Singh Sr, a point repeatedly emphasised by the Times of India: “The Indians need to visit the practice grounds regularly to remedy defects in their forward line, for it is too much to expect Punjab’s twenty-eight-year-old centre forward Balbir Singh to initiate and execute all his side’s attacks.”

These predictions weren’t accurate, as the Indians retained the title fairly convincingly, defeating Holland 3-1 in the final. Balbir Singh Sr was once again the star, scoring his third Olympic hat-trick in style and scoring 9 out of the 13 Indian goals at Helsinki. In his own words, “I was in my element that day and scored five of my team’s six goals. The match gave me another hat-trick, my third in Olympic hockey. Holland got a consolation goal, but overall it was a one-sided final.” 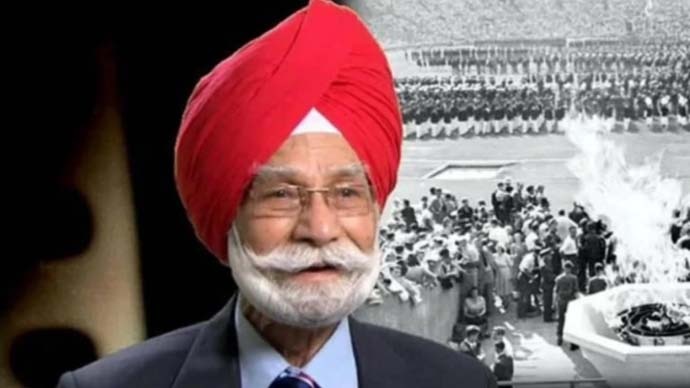 Balbir Singh Senior had emerged a worthy successor to the mantle that Dhyan Chand had left behind. (Photo: Facebook)

On arriving home in India, the team was accorded a royal reception in the capital. If anything, the number of functions far exceeded those in 1948 and the celebrations continued for nearly a month. At the official function in Delhi, the Olympic team played a match against a Rest of India XI in a packed stadium. Present in the audience were President Rajendra Prasad and Prime Minister Jawaharlal Nehru. That the players were overwhelmed by the response in India is evident from the recollections of Balbir Singh Sr: “The train in which we travelled was literally mobbed by enthusiastic hockey fans. People surged around our compartment and waited for our darshan. When we emerged from the train, they almost crushed us with bear hugs and shows of affection. We endured it all with a smile. The four Punjab Police players — Dharam, Udham, Raghbir and I — were taken in open Jeeps in a huge procession in Jalandhar. Thousands of people lined the streets and cheered us from treetops and housetops. We were showered with small gifts, baskets of fruits and sweets and garlands — these constituted the people’s simple way of showing their gratefulness.”

Balbir Singh Senior had emerged a worthy successor to the mantle that Dhyan Chand had left behind. Today when we mourn him, it is perhaps fair to ask for the Bharat Ratna to be conferred on both — Dhyan Chand and Balbir Senior — for we will never again see the likes of them in Indian sport. Three consecutive Olympic gold medals don’t come easy and in Balbir Singh Senior’s case, the gold medal was adorned with three hat-tricks, making it that much more special.

Greatness is immortal. It is forever.

(This is the second part of a two-part tribute. You can read the first part here.)

#Hockey, #Balbirsinghsr, #Balbir singh dies, #1952olympics
The views and opinions expressed in this article are those of the authors and do not necessarily reflect the official policy or position of DailyO.in or the India Today Group. The writers are solely responsible for any claims arising out of the contents of this article.