What Cameron Bancroft’s ball tampering will mean for Australian cricket

Playing hard cricket, sledging is one thing, cheating quite another.

The Aussies take great pride in playing the sport and would like the world to believe they are the most clean. If you mention the word sledging, the Aussies have almost a patent on it. Yet, when you point a finger at them, they get easily offended and use phrases like “crossing the line.”

Last year is still fresh in memory when Steve Smith’s side was touring India. Virat Kohli minced no words when he spoke his mind about Smith on the use of DRS, when the Aussie skipper seemed to be asking the dressing room for help! What happened in the Newlands Test on Saturday against South Africa was quite damaging, where Cameron Bancroft was caught with something between his middle and index fingers to scratch the ball. 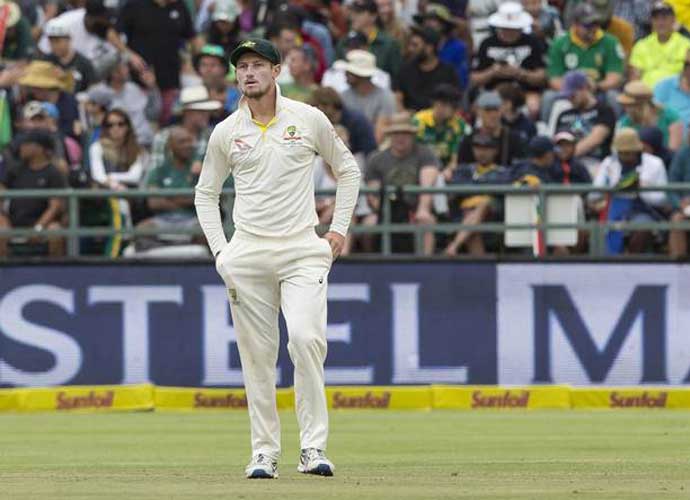 Cameron Bancroft was caught with something between his middle and index fingers to scratch the ball. Photo: AP

Experts on air, including two former captains, Allan Border and Graeme Smith, said Bancroft’s action looked suspicious. Videos of the same had spread like wildfire on media and social media and it did appear Bancroft had tape in his pocket and was working on the ball. These days, when every bit of action in any sporting field is covered by the television and images are beamed live, it’s impossible to hide anything.

As it were, it has been a controversial series between the Aussies and the South Africans. On Saturday, apparently Aussie coach Darren Lehmann spotted Bancroft tampering with the ball and sent a message through the walkie talkie to Peter Handscomb. He went on to the field between overs to tell Bancroft he had been caught. The umpires, too, spoke to Bancroft but surprisingly, the ball was not changed despite being worked on the rough side.

This one incident has caught like fire and reactions are those of anger and outrage. The Aussies would like the world to believe they play fair cricket and do not indulge in any wrongdoing. Steve Smith, well known for his pet “brain-fade” remark, gets away with many things. Certainly, working on the ball cannot be termed “brain-fade” as the evidence is damning.

One has to recall the famous “Monkeygate” incident in the 2007-08 India tour of Australia when Harbhajan Singh was under fire for his remarks over Andrew Symonds. The tour was rocked and skipper Anil Kumble rightly said at that time only one team played in the spirit of the game. The Monkeygate incident was remembered for long. However, once the Indian Premier League (IPL) began the same year and Aussie cricketers started coming to India for raking in the moolah, Symonds included, memories of the incident receded.

In the ongoing series in South Africa, with Australia not doing well, coach Lehmann has been saying the wrong things. After criticising the South African crowds for bad behaviour and so on, the focus now shifts to actual cheating, with Bancroft caught in the act.

To say that an incident like this happened by accident cannot be accepted, as using something like “tape” has to be deliberate. Bancroft would obviously not be doing such a thing without instructions from someone. Steve Smith, who became a hero after the win in the Ashes at home, and Lehmann will have a lot of answering to do in the coming days.

The role of umpires, TV umpire and match referee is very large these days. The Bancroft incident brings into focus the reputation of Aussie cricketers, which now lies in tatters. It’s a well-known fact that fast bowlers around the world like to “work” on the ball. From Imran Khan’s own admission to working on the ball to facing unplayable spells from Waqar Younis and Wasim Akram, doubts have been raised as to how they produce magic. But for someone like Bancroft, a batsman, to use things on the ball means the Aussies are not clean.

It is one thing to play hard cricket, sledge and win. But to use unfair means puts the Aussies under the scanner. Almost 15 years ago, coach Lehmann was under fire for his racial slur against Sri Lanka’s Sanath Jayasuriya. The language was absolute gutter, though he apologised later for it. Modern sport is cut-throat. The challenge to win is huge and the ability to deal with pressure is not easy.

At a time when analysis and post mortems of performances are done across several platforms, coping with losses is not easy. If the Aussie cricketers expect mercy at this point of time, they are not going to get it. Such is the image and aura of arrogance they have built for themselves, that critics will take great delight in Aussie bashing. Sadly, Bancroft has lit the fire!

#Australian cricket, #Steve Smith, #Ball tampering, #Cameron Bancroft
The views and opinions expressed in this article are those of the authors and do not necessarily reflect the official policy or position of DailyO.in or the India Today Group. The writers are solely responsible for any claims arising out of the contents of this article.