India vs Bangladesh: When Dinesh Karthik made Colombo seem like Chennai

Dinesh Karthik was born on June 1, 1985, in Madras. On March 18, 2018, Karthik was born again in Colombo. It was a Twenty20 delivery. It took all of eight deliveries for him to be born again. Everything you knew of Karthik before, ceased to exist. Karthik seized Bangladesh and our collective cricketing imagination in a matter of minutes.

For Karthik to be born again, he had to be forgotten yet again. It took Ravi Shastri to pull off yet another masterstroke. Yet to be dismissed in the tournament, Shastri backed Karthik to remain not out yet again - to such an extent, he nearly did not bat in the finals.

In a tricky chase, Vijay Shankar batting in his first T20 International inning, was promoted before Karthik. In the 17 deliveries he faced, Shankar too, like Karthik, was threatening to be born again. The four consecutive dot balls he faced, were poised to be linked to his Aadhaar card. Would Shankar ever live down Shastri's folly? But Shastri wanted him to separate himself as a man from a boy, what had happened? 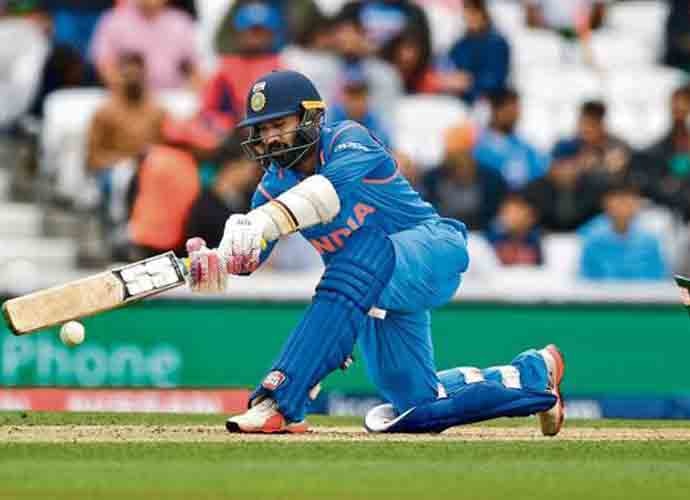 What did I know? Were we too absorbed in the Mahi fandom to even give another wicket keeping batsman an outside chance? Were we any different from the selectors for more than a decade? Were we also confusing formats?

Who knew that Dinesh Karthik was the man of the match in India's first T20 international match more than 12 years back. That from that match, only he, Dhoni and Raina play for India now. That was also the only T20 match, Tendulkar represented India in. In a relatively low scoring match, Karthik scored 31. He did not keep wickets.

Only recently, the Kolkata Knight Riders (KKR) did not retain Gautam Gambhir, instead, they made Dinesh Karthik their captain. As trending cricket jokes go, that cut through Twitter. Almost everybody laughed. Such is the perception of Karthik as a player. He made his Test debut more than a year before Dhoni, his ODI debut a month before Dhoni, and his T20I debut in the same match as Dhoni. While he won the match, Dhoni failed to score.

Then again, it wasn't as if Karthik didn't have his share of chances. Or did he? Even when he looked to be batting better than anyone in the ODI team, he failed to convert those brilliant cameos (as in the West Indies in 2009) into something more substantial. Opening the innings in Kingston, he scored a quick 67. But it will be Yuvraj's 131 that will be remembered from that match. In a reduced 27 over match, Karthik opened with a 43 ball 47. But it was Dhoni's 34 ball 46 that won him the man of the match.

That he has played only 19 T20 Internationals (including nine not outs) is somewhat of a mystery. Not that India plays many T20Is but Dhoni has played 89 T20Is in a similar time frame. In a way, it shows the frame of mind of India's selectors - how they continue to mix and muddle formats?

While it is arguable that Karthik isn't India's first choice Test or ODI wicket keeper batsman, surely he makes the T20 squad on his batting alone?

For too long, India has been ODI crazy, and this has impacted both their Test and T20 selections - often sacrificing brilliant specialists just to see the wrong guy play the wrong format.

While T20 cricket isn't only about what Karthik did yesterday, having a batsman or two who can plunder in the mix will always threaten to win you lost games. In T20, this threat is way more than in the other formats.

Not having such a batsman, especially a finisher who can switch matches in the blink of an eye, is spitting at the format.

In the 19th over, Dinesh Karthik twitched his way to the crease. Or did he? He often twitches. His is that kind of character. It's as if there are ants in his pants. He often looks as if he's breakdancing at the crease. Either that or some form of Karthik dance. It's distracting.

Yesterday though, Karthik did not twitch. He was still. He made Bangladesh twitch. First ball six over long on. Next ball four. Third ball six over square leg. Colombo had become Chennai.

Five needed off one ball. Dinesh Karthik cover drives Soumya Sarkar for six. India wins. Dinesh Karthik does not twitch. He's a journeyman cricketer. And on long cricketing journeys such as his, there are some off days, some on days. Later, Karthik will tell you (or did he?) that he was just on.

Oh, and while we're at it, how about a little introduction. Hardik, meet Dinesh. It can often be lonely at the bottom. And what's better than one T20 finisher? Surely two. Time to tango.

Also read: The COA is going beyond its brief by meddling with cricketing matters