Is Virat Kohli the ultimate fanboy of Indian cricket?

Whether it's a teammate’s hundred or a successful review, the captain gives it his all and then some.

Jayant gave India extended control while he gave Ashwin and Jadeja extended breaks. He was beyond the numbers, he was that reassurance that all’s going to remain unwell for England.

Often that reassurance meant a wicket very early in the spell. Right up there in the series will be that moment when Kohli reviewed a Jayant Yadav appeal. Not the double hundred, not the series’ win, that moment was the moment for Kohli. It was a guttural “YESSSS!” so deep from Kohli’s Delhi it didn’t need an expletive.

That moment was belief in instinct, in Jayant Yadav, in his men on the field. In himself. A review-gone-right can do that. Right there you could see that for Virat to hold himself together at the crease, he has to let himself go on the field.

That in spite of being captain, he has no qualms being one of the crazy boys. His leadership is about an almost yin and yang balance between the two Virats. That he sees its worth, knows its worth and seizes it for all it is worth is the icing on the extra creamy pineapple cake that he possibly loved at those DilliBir’day parties.

Ashwin and Jadeja batted before Jayant but scored much less than him. While Ashwin scored 137 runs, Jadeja made 129 runs and Jayant knocked 221 runs coming in at No 9. In those 221 runs was his first Test hundred, one he scored with Kohli at the other end. 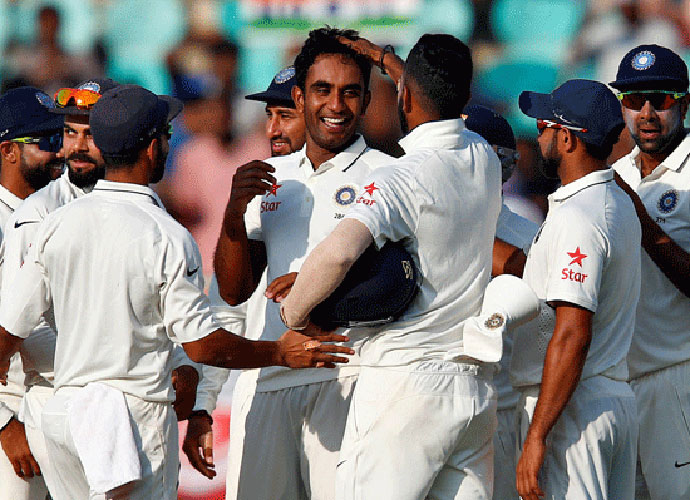 The hundred came after Virat’s double hundred, it was obvious which meant more to the Indian captain. Virat started to celebrate even before Jayant.

Moving to the present, KL Rahul on 98, single taken followed by overthrows - Virat celebrates, high-fives Rahul mid-pitch, even before they complete that 100th run. His first in India, after a lean patch of seven innings.

Almost two years ago, after scoring 3 and 1 on debut in Australia, KL Rahul was backed by his captain, Kohli, to play in the fourth Test at Sydney. What followed was a 241 run partnership between Kohil and Rahul. In that innings, Rahul scored his first Test hundred.

You don’t need to see a video recording to know who was more demonstrative on the pitch that day.

Each team has two reviews. Two are not nearly enough for Virat. He believes in each appeal as if it were an appeal to the Cricket Gods, beseeching then to GIVE-IT-OUT. For who will know better than Virat what a strong belief can achieve.

Also read: Why you should treat yourself to Virat Kohli

Post your comment
#India-England, #Virat Kohli, #Cricket
The views and opinions expressed in this article are those of the authors and do not necessarily reflect the official policy or position of DailyO.in or the India Today Group. The writers are solely responsible for any claims arising out of the contents of this article.