England won against India by 31 runs. Eoin Morgan's men made sure Virat's boys had a hard time in Birmingham. And Team India showed no intent to win.

“I’m a cornered tiger with nowhere to run; the only option that remains is to attack,” Paulo Coelho.

In a must-win game to stay in the hunt for the World Cup semi-finals, England went back to the ploy that elevated them to the numero uno status in ODIs — striking the ball out of the park as often as they can. They hit hard, swept, reverse swept, belted 13 sixes and piled up a mammoth 337-run total that eventually was too big an ask for India who fell short by 31 runs.

Before the tournament, England were the firm favourites to win the competition, but a couple of losses put them in a tricky situation against an unbeaten Indian team. With Jason Roy declared fit, their fortunes began to change, even as they also won the toss. 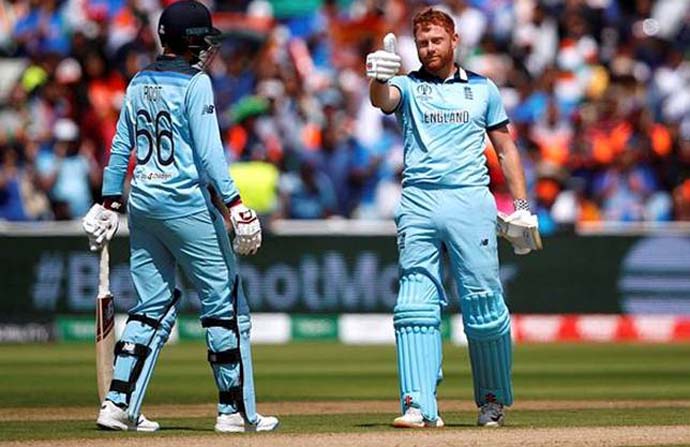 England decided to bat and Roy clearly showed how much the team missed him when in Shami’s first over, he smashed two boundaries. The intent was visible but was tough to execute on a regular basis against the quality of Bumrah. There were a few inside edges and misses by Bairstow.

After a few quiet overs from India’s new ball bowlers, Hardik Pandya was introduced in the attack and he got Jason Roy to pull one which he wasn’t able to connect and Dhoni appealed for a caught behind. The umpire turned it down but strangely India did not review, a decision they would rue later, for replays showed a clear spike as the ball had brushed the gloves. This was it, perhaps the last moment of hesitation shown by the Englishmen in the entire match, as Roy hit a six and a four of the next two balls of Pandya. The floodgates had opened and India had no extra boats to survive!

As the Roy-Bairstow show turned relentless, for the first time in the tournament a team attacked Indian wrist spinners — and took them to the cleaners. For the first time too, Kohli’s captaincy was seriously tested — and seemed unimaginative for the most part as the Indian skipper neither made quick changes nor tried anything out of the box to stem the flow of runs.

Between the Chahal-Kuldeep duo, India leaked 160 runs in 20 overs with just 1 wicket to show for it. Virat never tried Kedar Jadhav and one was left wondering that if he is not trusted as a bowler then India might as well play Dinesh Karthik who is a more solid batsman. India also missed Vijay Shankar in the playing 11 who was ruled out due to a toe niggle allowing Rishabh Pant to make his World Cup debut. After the openers’ onslaught, Ben Stokes piled on more misery for India. At one stage even 400 looked a possibility but credit to Bumrah, and to an extent Shami who finished with 5 wickets, that England was kept to a par total on a flat deck with small boundaries.

KL Rahul had unsuccessfully tried to latch onto a catch at the boundary that went for six but in the process fell on his back. He was out for the most part of the first innings. But when he came in to bat, he looked alright and a lot was expected from him and Rohit Sharma to get India to a solid start. Instead, Rahul made a 9 ball duck, getting caught and bowled by Chris Woakes who was allowed to bowl three maidens in a row. It was a rather jittery first 10 overs for Virat and Rohit, India’s most experienced batsmen. Importantly, they did not throw their efforts away and grew in confidence. While they were at the crease, India looked capable of overhauling the target. Sadly, Virat chipped one to point against the run of play in the 28th over.

Most of India’s fan base and the media was clamouring for the inclusion of Rishabh Pant in the team — the stage was well set for a Pant special with just about 20 overs left as he has been in plenty of such scenarios in the IPL. Rohit and Pant did put up a 50-run partnership but the required rate was steadily rising leading to Rohit’s dismissal after scoring his third hundred of the championship. Hardik and Pant briefly gave hope to Indian fans but it was just too little too late. With Plunkett plucking three wickets at crucial stages, India’s chase ran out of steam.

Strangely, Dhoni and Jadhav at the end shut shop and showed no urgency or resolve to go after the target, possibly keeping the overall net run rate situation in mind for later. The first defeat in World Cup 2019 for India gives them a clear signal to take a hard look at their team composition.

In Dhawan’s absence, India can ask Pant to open the batting, allowing Rahul to go down the order at No. 4 as he hasn’t looked promising against the new ball. Also, Ravindra Jadeja could be a good option to strengthen the lower order batting, as well as give another strong bowling alternative. His fielding, of course, is outstanding and it was his brilliant catch that got India the crucial wicket of Roy. India must take a leaf out of Australia’s book who dropped Nathan Coulter-Nile and drafted in Jason Behrendorff — and make some hard choices themselves.

The ‘men in blue’ donning orange-and-dark-blue jerseys looked rather odd in this crunch match and their fortunes too dipped a shade.

For once though, the entire subcontinent was egging on Virat’s warriors as an Indian victory would have smoothened the road for Pakistan, Bangladesh and Sri Lanka in their quest to get into the last four. Instead, the loss has ensured Sri Lanka’s exit and slim chances for the other two Indian neighbours.

In particular, Pakistan will now be on tenterhooks as, despite their recent wins, their progress now rests on New Zealand beating England and in winning their own last match.

English hopes have soared as booking a semi-final berth is now in their own hands — all they need is a win in their final match against the Kiwis. Despite the loss, India sits pretty at the points table and is just one win away from a confirmed place in the Final Four.

Stranger things have happened though in the game of cricket — and the defeat has shown that though India is currently the numero uno ODI side, there’s no room for complacency!

Also read: It's not clockwork orange: For me, Team India's orange jersey is not familiar. It makes it harder for me to cheer

Post your comment
#Kuldeep yadav, #Hardik Pandya, #Virat Kohli, #Virat kohli 2019 world cup
The views and opinions expressed in this article are those of the authors and do not necessarily reflect the official policy or position of DailyO.in or the India Today Group. The writers are solely responsible for any claims arising out of the contents of this article.