India vs Pakistan Meme Match: As India-Pak battle on the pitch, social media sees a furious clash. Guess who's winning?

Pakistan’s meme game is just as bad as their fielding.

The high-voltage cricket match between India and Pakistan is happening as we speak, and the stakes are huge! India’s batting line-up is doing better than ever before with a considerably good run rate. The Pakistani bowling attack, marked by several bouncers, has teeth and they're looking to bite.

However, there is another battle happening parallel to the battle on the pitch.

It’s the battle on social media.

Both Indian and Pakistani fans are making dank memes on the match and sharing them on Twitter and Facebook. The meme war is actually getting intense and truth be told, neither side is holding back!

This Pakistani fan thought she could mock Virat Kohli all she wants. So, Indian fans responded to her in the best way possible. 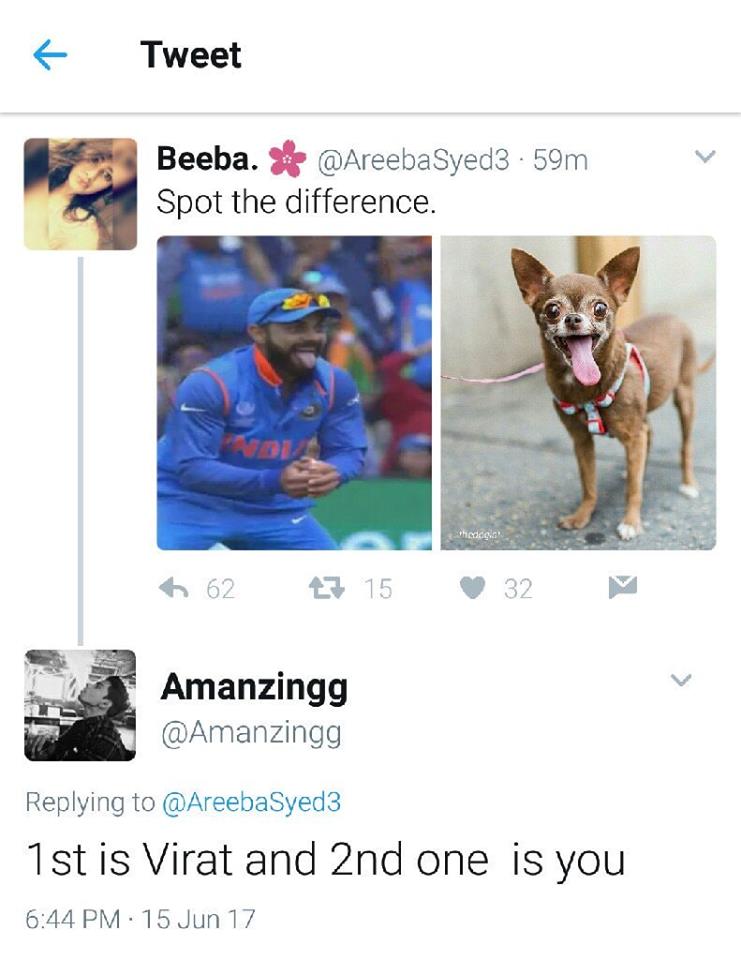 Looks like Pakistanis are really good at crossing borders:

2 warnings issued to Mohammad Amir for stepping on the middle of the pitch. They just don't have any respect for borders and boundaries. #IndiaVsPakistan #INDvPAK #INDvsPAK pic.twitter.com/7J8qCPCHin

After all, as an ad recently mused, ‘Baap baap hota hai...’:

Pakistani fans, however, were in no mood to take the criticism lying down. They tried to claw back at the Indian fans — and failed miserably. But chalo, let's give this much to the Pakistanis — at least, in this one endeavour, they try!

How we are supposed to explain it to anyone that this was not a run out from this situation ????#INDvsPAK #IndiaVsPakistan pic.twitter.com/402NQJVSGf

He is now applying cold water to the burnt area:

Imran Khan tweeted this morning, advising Pakistan to bat first. But Sarfaraz being Sarfaraz, had to go his own way:

Some Pakistani fans couldn’t help but make memes on themselves:

Well, here's a kudo or two to them — after all, despite the world doing so, it takes guts to laugh at yourself.

This Pakistani fan wanted Indians to ‘feel the moment’ (they are. Trust us):

The absolute hero though was this tweet which summed up Pakistan’s fielding in today’s match:

While the match is still on and we don’t know who’s going to win the pitched battle on the pitch, the battle on social media has been won by Indians, hands down.

It’s okay, Pakistan. We know you are having a hard time taking wickets. Or doing anything else in life, really. But at least you've tried to step up your meme game. Truly, you're still very far from even average. But, as they say, try, try and try again. You're making us laugh — which is about all you can really do.

Also Read: Why the Captain is Crucial: How the difference in leadership styles will decide India vs Pakistan today