While batting, could Dhoni have advised Kohli about the bowling?

At the end of the 9th over, Ravindra Jadeja was dismissed. CSK reeling at 74/4, chasing 205. Dhoni walked out to join Rayudu. The asking rate: 12 runs per over. Doable but across 12 overs that was going to take some doing.

It’s just that Virat Kohli played his cards too soon – Umesh Yadav was bowled out by the 8th over (1/23) and Yuzvendra Chahal was through by the 13th (2/26). That didn’t leave much in the tank for the last seven – of course that depends on what you make of Corey Anderson, Pawan Negi and Mohammad Siraj as your go-to bowlers at the death.

Kohli bowled Washington Sundar for one over – in the power play, the third over. Rayudu hit him for two 6s in that over. Sundar has so far played all six RCB games. Negi, in his second match of the season, dismissed Shane Watson in the first over of the match. He next bowled the 10th over. At 1/17 off two overs, he appeared to be a better bet than Sundar for the 14th over – three 6s and 19 runs later, Negi had gone for 36 off his 3 overs. Neither he nor Sundar bowled again.

Six overs of sameness, of Corey Anderson and Mohammad Siraj’s medium pace followed. Anyone who gives Corey Anderson the 20th over in a chase has been largely absent in the IPL.

Anderson was handed the ball more in hope than anything else. Working backwards from the 20th over, there is no way, any IPL captain, should be asking him to bowl the final over. Rarely has he bowled his full quota in the IPL, often not bowling, and when he does, it’s the odd over or two.

Here, Virat Kohli was entrusting him with four overs, and the icing on the cake for CSK – the 20th over. His T-20 economy rate is 9.07. Could it be a case of an identity crisis – did Kohli think for a moment that this Corey James Anderson was just James Anderson?

The England series and, naturally, Anderson has been on Kohli’s mind.

Herein lie some of the answers and Dhoni’s belief – in that word again, process and seeing it through. It’s incorrigible to think that, after so many seasons, Jadeja is a work-in-progress, but it appears so. So far, they’re winning without him. Against RCB, he batted before both Dhoni and Bravo. That after he batted for 12(13) before Bravo’s match-winning 68(30) against Mumbai Indians.

There is no panic, no chopping or changes – Jadeja stays, regardless of whoever else exits. Along with Rayudu, Raina and Bravo, he forms Dhoni’s core group.

So if and when at a later stage, Jadeja pulls off a win with either bat or ball, don’t be too surprised. There’s enough faith in him to do next to nothing, yet retain his spot.

It’s an assumption worth making that at the international level skill sets can be quite similar, and often confidence and form can either take a dip or surge. Is Dhoni waiting for that great, big wave on which Jadeja will surf CSK to a win while all others will drown? Is that what has prompted him to play Imran Tahir in five out of six games so far? 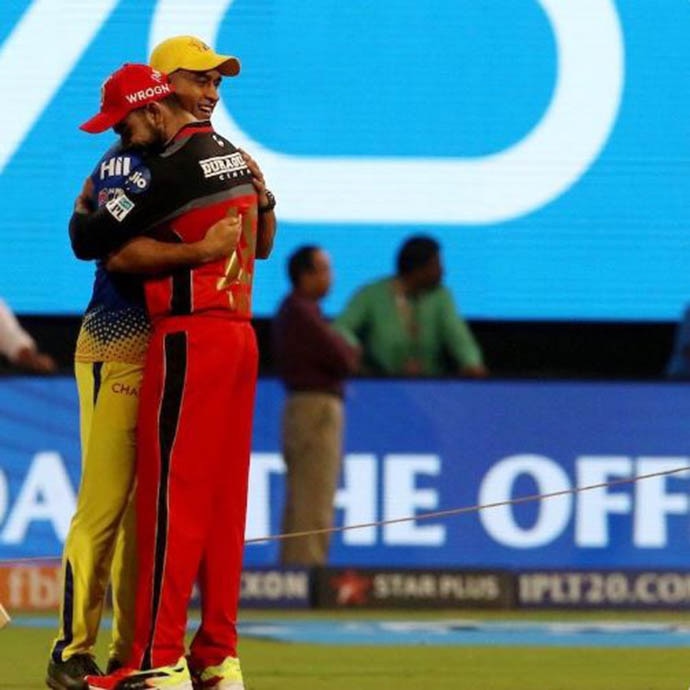 Dhoni, in the middle, had a ringside view of Kohli’s captaincy. Of how he rushed in too early, played all his cards way too soon – and still worse, refused to take a chance with one of his possible trump cards, Washington Sundar – for lack of faith in the off break bowler against two marauding right-handed batsmen?

Instead, six over of medium pace. What would Dhoni have done – was he, as he is for India, behind the stumps – controlling the spinners and the game while Kohli patrols the boundary?

Daresay there would’ve been more unpredictability. Pace off the ball? Certainly. Chahal held back for at least one over – the 17th or 18th? And Umesh in spite of his profligate ways later on, that one over just in case? If all else failed, either Sundar or even Negi would’ve bowled one more to just break it up.

Doubtful either way, Anderson and Siraj would’ve bowled six on the trot.

There would’ve been far more chill in the middle. That look on Anushka’s face dreading yet another RCB defeat may not have been there either.

The longer Dhoni stayed in the middle, pushing the match into the 20th – the more RCB faces started to look like hers.

They had walked into a trap, one of their own making. They knew. Dhoni knew. Bravo knew. Everybody knew.

16 runs off the last over. That it was over in four was a blessing for RCB. That it ended with a Dhoni six, and Bhajji running in to lift the champion was way too familiar.

(H/T to @viidyasagar  for his tweet that planted the seed for this article.)