IPL Final: Why it's beyond Rashid Khan vs CSK

Most batsmen this IPL have been clueless to even block out Rashid.

Those are Rashid Khan’s wickets and match analysis in SRH’s two play-offs.

Before that, Virat Kohli, AB de Villiers and Moeen Ali, 3/27. Like Dhoni, Kohli too was castled. As was AB de Villiers in RCB’s first match against Rashid Khan.

Rashid’s 21 wickets after 16 matches at 6.78 runs per over barely convey the terror that accompanies his bowling. While many overseas players continue to be suspect against spin, it’s the big-ticket Indian names that have looked dazed when facing Rashid.

Few, if any, have dominated him as Rishabh Pant and Ambati Rayudu in the IPL. In the playoffs between SRH and CSK, Rayudu was demoted to tackle Rashid; a first ball dismissal to Siddarth Kaul meant he never faced the Afghan. That day, not even Rashid’s 2/11 (Dhoni, Bravo) could stop CSK – the Finals, like that match, will also be played at the Wankhede.

It's also Dhoni vs Williamson as well (Photo: @IPL)

In the Eliminator against KKR, Kane Williamson made three changes to his side from their previous game. Who turns up in the final could be of little impact, as their mainstays are clearly defined.

It’ll be down to Rashid Khan and Bhuvneshwar Kumar with the ball; Shikhar Dhawan and Kane Williamson with the bat. And by the look of it, Rashid again, with the bat, and in the field.

Though SRH hardly seem like a team in a hurry to change anything too dramatically – their greatest accomplishment, much like CSK, is not to panic.

This was all too obvious when KKR dug into their bowling in the power play; even when the quicks were bleeding at 12 runs and over, with Bhuvi being ripped into, Williamson did not panic – he did not allow his hand to be forced; he did not bring Rashid on in the power play.

Lesser teams and captains would’ve rushed Rashid in on the first sound of alarm bells. Instead, Williamson stayed secure, that no matter how hard Lynn and Narine went early on, later, when the squeeze was on in earnest, with Rashid on, it would resemble yet another familiar SRH defence. 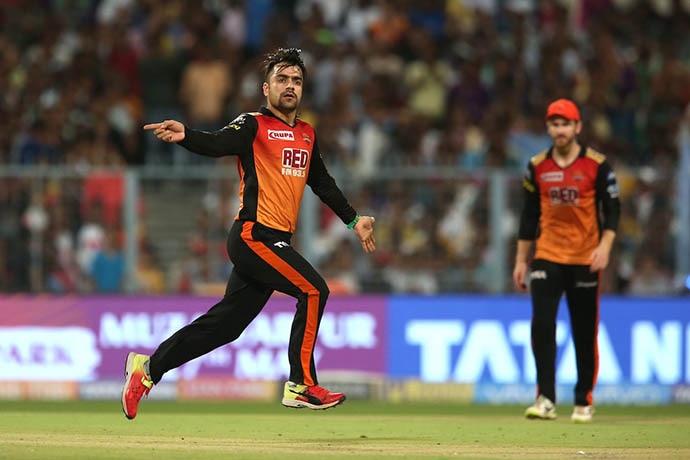 But how hard will it be for Dhoni’s CSK to demystify Rashid?

Forget attack, most batsmen this IPL, have been clueless to even block out Rashid. The sight of two close-in fielders all but terrified Andre Russell. It was Rashid’s last over. The game was still up in the air. Russell surviving Rashid could well have been the game, and the flight to Mumbai. Instead, the pressure choked him, his bat spat a catch to Dhawan at slip.

As for CSK, the game may not be Rashid. The eliminator against KKR was Rashid’s biggest showing – he knocked a team single-handedly, first by his mere presence, next, with the bat, then with the ball, and when not bowling, running out Rana, catching Gill and Mavi.

No matter what is said indoors or done in the nets, they won’t be facing Rashid in the nets. He won’t be there to prepare them for those AK 47 stares. Those mocking smiles. “I might be 19, but I’ve got you right where I want you, in my video game, and guess what, the remote’s with me, and you are playing on my terms”. Both teams refuse to panic.

Conditions apply however. Both teams have obvious flaws and similar strengths – both refuse to blink first. Both refuse to panic. Why would they, look at the leadership, on the field, off it? Much as it will be Dhoni vs Williamson, it will be Moody vs Fleming.

Much as it will be Rayudu vs Rashid or even CSK vs Rashid, it will also be which team picks fewer passengers. To play fringe players that have an added, often unseen utility, such as fielding or catching, can often turn a match on its head.

Look at Glenn Maxwell in DD’s last match against MI. Not only did his two boundary assists hand two dollies to Trent Boult, his 22(18) opening the batting, appeared to be longer than he had batted all season.

Whether SRH pick Manish Pandey or CSK drop Harbhajan Singh (who did not bowl an over in his last match) could in a small way define who lifts what at the end of Sunday night’s final.

But it really is Rashid vs CSK. Unless one of them doesn’t turn up at all.