Why the IPL is no low-grade cricket

The tournament is a melting pot of rich talents from all over India and the world and a stepping stone for many of them.

Kolkata Knight Riders (KKR) coach Trevor Bayliss could not have been farther from the truth when he said that the Indian Premier League (IPL) did not match up to international standards. He attributed this as the reason for Umesh Yadav and Morne Morkel's good performance despite not looking the part in international matches. This, by all means, is a simplistic argument.

The IPL, since its launch in 2008, has caught the imagination of the nation, but not simply because of the pageantry involved, the unfathomable amounts of money pumped into it, the unrestrained partying that goes with it, complete with liquor, cheer girls and Bollywood stars (and divas!). But does the IPL have any worth strictly from the perspective of cricketing quality? You bet it has.

Agreed, that it's not cricket in the purest sense of the term. Agreed, it is not Sunil Gavaskar against the legendary West Indian quicks, or Sachin Tendulkar against the guile of Shane Warne, or indeed, Brian Lara against the inimitable Wasim Akram in a Test match. True, it does not match up to those standards. But to measure the IPL by the same yardstick as Test cricket would be conflating the categories.

The skill sets required in T20s and indeed 50-over cricket are different, and a player has to adjust to the different formats. The feeling among cricket purists is that a tournament like IPL and indeed T20 cricket is "lesser" cricket and if you are a good Test player, it would be easy for you to adjust to T20s.

However, you need a few more things to succeed in T20s, for instance your ability to score at a brisk pace, bowl wicket-to-wicket and be supremely athletic on the field. You can't be only a textbook Test player, yet succeed in T20s, as Cheteshwar Pujara found out.

Now, having decided not to judge the IPL (and T20 cricket generally) in terms of Test cricket, or the "purest" form of cricket, let's now consider if the IPL can match up to international T20 standards.

The IPL has been known not only for stellar performances by international stars, but it has thrown up domestic talents, many of whom have gone on to make a mark on the international stage too. So, not only are we awestruck by Chris Gayle's towering sixes or Lasith Malinga's toe-crushers, we are equally, and perhaps in a greater measure, awestruck when a Manoj Tiwary tears into top international bowlers like Dale Steyn, Jacques Kallis and Anil Kumble. 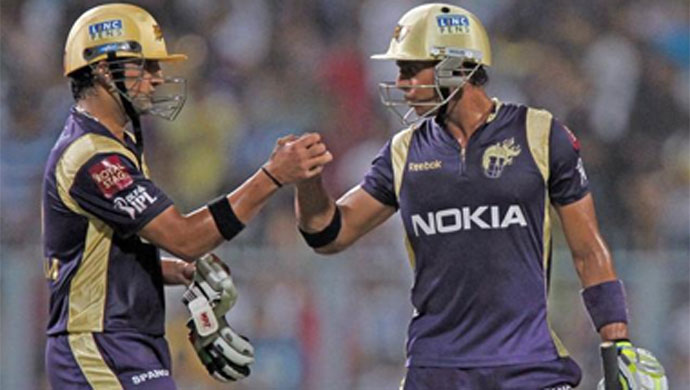 Manoj Tiwary's (right) batting has given the fans a lot to cheer.

Again, we share in the joy of a young and unheralded Kamran Khan as he takes out a rampaging Sourav Ganguly to force a tie and push the match into the Super Over in 2009. It was a match, which Khan's team Rajasthan Royals won in the end and Khan became a household name.

A man who also played a big part in that win was Yusuf Pathan. He had caught the world's attention in the inaugural edition of the tournament with his power hitting that rivals Gayle's. The high point of his IPL career has been a destructive 37-ball century in 2010 against a Mumbai Indians attack that included the likes of Lasith Malinga, Ryan McLaren and Zaheer Khan.

Kamran Khan and Pathan were part of a Rajasthan Royals team that surpassed itself under the tutelage of Australian spin legend Shane Warne. Others in that team included Ravindra Jadeja and Munaf Patel, and Warne made men out of them, as it were. Jadeja is now an integral part of India's one day international (ODI) and T20 set ups and Munaf played a big part in India's World Cup win in 2011.

Two more domestic talents who have done well in the IPL are Manvinder Bisla and Suresh Raina. The little-known Bisla was in every way the "man of the final" in 2012 when his stunning 48-ball 89 took KKR to the crown after its opponents, the Chennai Super Kings (CSK) had set a mammoth total and KKR lost its talisman Gautam Gambhir early in their innings. Bisla's opponent in that match, Raina, has been one of the success stories of the IPL, and remains the highest run getter in the tournament.

This year, KKR's Surya Kumar Yadav set the tournament up perfectly with a swashbuckling 20-ball unbeaten 46 in the opening match, helping his team chase down a tough total posted by the Mumbai Indians. Yadav looks a fine prospect.

The IPL is a melting pot of rich talents from all over India and the world and a stepping stone for many of them. And here, if you do well, you will get your due.

It is the IPL that has given visibility to these talents and the recognition that they deserve. The tournament, with all its glitz and glamour has a viewership that no Ranji Trophy or Duleep Trophy could ever imagine. With all due respect to the country's first class tournaments, there is no gainsaying that wonderfully gifted players have for ages, picked up truckloads of wickets or scored tonnes of runs, yet have kept on banging their heads for an India call. A case in point would be that fine left arm spinner for Bengal, Utpal Chatterjee, who was never considered again after only three matches for the country in the 1990's.

Another reason why the IPL is certainly world class is that it is here that you will get to witness duels that you will never see on the international stage. Viv Richards against Holding-Garner-Marshall-Roberts, or Inzamam against Wasim-Waqar at say, a World Cup, may be only a stuff of imagination, but in the IPL an AB de Villiers versus Dale Steyn duel is very much for real, as is Chris Gayle against Sunil Narine.

Here is where teammates on the international stage turn foes and that's a mouth-watering prospect. Also, with the advent of the IPL and T20 generally, batsmen have started to play shots that did not exist say, 20 years ago. Thus, scoops behind the wicket, or guiding the ball over the wicketkeeper's head have all become par for the course now. Such shots would have invited the disapproval of a coach from earlier generations and purists would scoff at them, but it can't be denied that players are today pushing the limits of batsmanship in every way possible, and no total is now big enough to chase down. It has had a rub off effect on one-dayers and even Tests. The bowlers have also evolved newer ways to deal with an onslaught. Fielders today are reaching balls that players 20 years ago would not even have attempted to reach. All these make the IPL world class.

There are examples galore from the world of sports that club matches can, and do measure up to international standards. To draw a comparison with football, the famous Tiki-Taka playing style of the world-beating Spanish side of 2008-2012 is said to mirror that of FC Barcelona. It is not simply the Messis, Ronaldoes or Gerrards who make up a champion team. It is the lesser-known players who play the supporting cast to the lead actors that makes a team complete. The same is true for the IPL.

The ultimate test of whether the IPL measures up to international standards or not would perhaps be if a match between the world's best international team and one of the top IPL teams can be arranged. Let's have Australia as the best international team and let's choose the Royal Challengers Bangalore (RCB) as their challengers. Who can say if the Gayle-de Villiers-Kohli-studded RCB batting line-up won't tear the Aussie attack apart? What would Trevor Bayliss have to say then? By the way, Bayliss is an Aussie.

#Rajasthan Royals, #KKR, #Gautam gambhir, #IPL 8
The views and opinions expressed in this article are those of the authors and do not necessarily reflect the official policy or position of DailyO.in or the India Today Group. The writers are solely responsible for any claims arising out of the contents of this article.