What Age? Cricketers in their 30s are bowling colleagues in their 20s out of the game!

The IPL establishes that cricketers in their 30s or beyond are agile and energetic enough to coexist with, and often outshine, their counterparts in their 20s.

Mid-thirties is young for a professional golfer. But cricket is a different kettle of fish. In the longer five-day and one-day versions of the game, team members referred to as 'very senior cricketers' are usually that old.

As Twenty20 is the shortest and fastest form of cricket, seniors sharing the dressing rooms and dugouts ought to be even younger. After all, T20 matches last for less than four hours — it is a short period in which the two rival teams, put together, can score more than 400 runs in less than 40 overs.

The high rate of scoring implies that the matches are characterised by savage hitting and quick running between the wickets. Fielding touches such high standards that acrobats can be embarrassed!

The ongoing Indian Premier League is a reminder that several cricketers who are 35 or more are agile and energetic enough to coexist with — and outshine — their counterparts who are perhaps a decade younger.

Labelled "Dad’s Army" because of the number of 30-plus players in their squad last year, Chennai Super Kings won the IPL in 2018.

Points table leaders with one more match to play, CSK’s senior players aren’t getting any younger. However, the team has acknowledged the invaluable worth of experience by opting for them this year. Bravo, the swashbuckling all-rounder, rationalised on chennaisuperkings.com, "We were aware of the name-calling but you can't beat experience, no matter... The core of the team was kept, and that made a huge difference. Last year, everyone doubted us, and we went on to win the crown.” The CSK team was labelled "Dad’s Army" because of the number of 30-plus players in their squad last year. (Photo: AP)

West Indian Kings XI Punjab batsman Chris Gayle has, historically, put the fear of God into the opposition because of his ability to smash the cherry around the park. Gayle, 39, is terribly slow and ungainly as a fielder, which means a team must be prepared to sacrifice a few runs because of misfields if he plays for them.

Gayle has played a few knocks that can serve as tutorials in power hitting to most newcomers in T20 cricket. He played a beauty of a knock of 79 against Rajasthan Royals, hammered 63 against Mumbai Indians, and scored 69 against Delhi Capitals. Delightfully lazy and with nominal footwork, the day he remained unbeaten on 99 off 64 deliveries against the suffering Royal Challengers Bangalore, he broke many hearts.

RCB batsman AB de Villiers, the 35-year-old South African maestro, continues to combine copybook stroke-making with shrewd innovativeness to send the opposition to the gallows. Although RCB has one more match to look forward to, the team under Virat Kohli has become the first one to get eliminated from the IPL.

De Villiers has played his part with the bat for his team though, scoring an unbeaten 70 and 75 against MI, 63 against Kolkata Knight Riders, 59 not out against Kings XI Punjab and, again, 82 not out against the same opposition. His batting has been characteristically attractive and productive, which has been one of the highlights of the tournament.

CSK skipper MS Dhoni, 37, is also at the top of his game. Dhoni’s batting is as much about level-headed calculations as it is about muscularity in shot-making. In this IPL, he has run those famously quick singles and also used the helicopter shot to make the ball fly as high and far as it earlier did. His stumping has been lightning-quick as always — and his leadership, as poised and inspirational as ever. 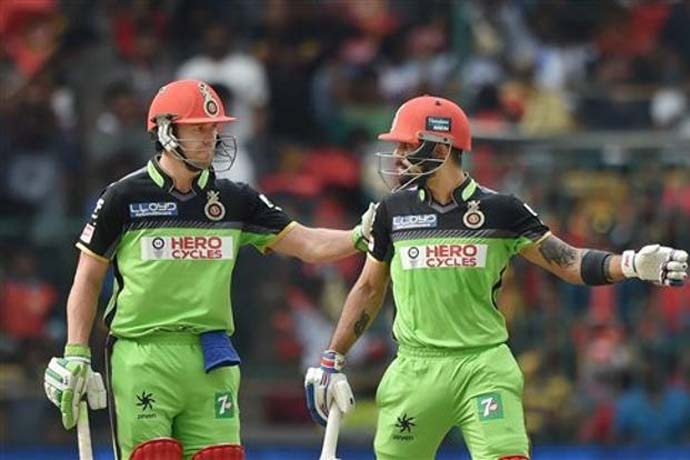 RCB batsman AB de Villiers, the 35-year-old South African maestro played his part with the bat for his team — scoring an unbeaten 70 and 75 against MI, 63 against Kolkata Knight Riders, 59 not out against Kings XI Punjab and, again, 82 not out against the same opposition. De Villiers (L) here with Virat Kohli (R). (Photo: PTI)

Dhoni testified to his decisive impact in a match with a Player of the Match-winning performance against Delhi Capitals in which he scored an unbeaten 44 and kept brilliantly. Prior to that, he batted marvellously to score an unbeaten 75 against RR and scored another Player of the Match-winning knock of 58 against the same opposition. His unbeaten 84 off 48 deliveries against Royal Challengers Bangalore was the best ever of his IPL career, showcasing his prowess as an outstanding finisher in a match CSK lost by one run. What an irony!

Sri Lankan speedster Lasith Malinga, 35, is famous for his deadly accuracy in the death overs. Forever lethal even otherwise, he has been in fine form for MI this season. No longer in his prime, he has nonetheless bowled a couple of sensational spells against defending champions, Chennai Super Kings. His 3 for 34 and 4 for 37 helped MI do the double against the formidable CSK.

In another match against RCB, Malinga picked up 4 for 31 to play a crucial role in his team’s win. Malinga might have picked up a few more wickets had he not missed a couple of matches to go back to Sri Lanka and play in the provincial one-day tournament. With Mumbai having qualified for the playoffs, the paceman will have an important role to play for sure.

Accomplished and wily, South African leg break googly bowler Imran Tahir has a distinct way of celebrating his conquests. Whenever he is called upon to bowl, he tests the aggressor’s patience and skills in an unforgiving format in which every ball is meant to be hit. The number of times he has given away less than 30 runs in his four-over spells makes for astonishing reading. And, his spells of 4 for 12 against Delhi Capitals and 4 for 27 against KKR are two of the best in the tournament so far.

Not every senior has been consistent though.

In supreme form with the bat in the fourth season of the Pakistan Super League (PSL) before IPL 2019, Shane Watson, 37, has been mediocre in the IPL for the most part. A brilliant exception was his killer punch against Sunrisers Hyderabad in the 11th CSK match.

In full flow that day, he scored 96 off 53 deliveries with nine fours and six sixes to mastermind a convincing six-wicket victory for his team. The knock showed that age hasn’t eroded his ability to carry out merciless demolition jobs, although he needs to deliver more of that in the playoffs.

The tournament, of course, has 35-plus players who haven’t managed to be under the spotlight this year.  Harbhajan Singh, 38, has been rather effective without being able to make it to the CSK squad on every occasion. Yuvraj Singh, 37, has only got a handful of opportunities to be a part of the playing eleven in the strong Mumbai Indians squad, making one wonder whether this would be his last season in the tournament.

Amit Mishra, 36, has bowled economically and also picked wickets on a few occasions also without being able to make it to the final eleven of Delhi Capitals in all the matches. Thirty-five-year-old Bravo’s performances for the CSK have mostly reminded us that he is capable of a lot more – both with the bat and ball.

The present edition of IPL has produced stars as usual, among them senior players who have been masterly competitors on the field. Younger players have mostly hijacked the limelight, no doubt, but these seniors have also come to the party and established emphatically that experience matters.

Also read: War, peace and IPL: What my meeting with Rula Ghani, the First Lady of Afghanistan, was made of

Post your comment
#Quetta gladiators, #Pakistan super league, #Royal Challengers Bangalore, #Delhi capitals
The views and opinions expressed in this article are those of the authors and do not necessarily reflect the official policy or position of DailyO.in or the India Today Group. The writers are solely responsible for any claims arising out of the contents of this article.