IPL spot-fixing episode in 2013: What happened behind closed doors

[Book extract] Captain Rahul Dravid was distraught. He had his hands on his head and just couldn’t speak.

Not one of the 25,000 people present at the Wankhede Stadium on the night of May 15, 2013 to watch the encounter between Mumbai Indians and Rajasthan Royals could predict what was to unfold within six hours of the completion of the match. Mumbai had edged out Rajasthan by 14 runs and it had been a perfect night out for the home fans. For the Royals, on track to make the playoffs, the defeat was one to take in their stride and move on. At least, that seemed like the plan.

“We were staying at The Oberoi and I got a call at 5.30am from the duty manager of the hotel. My wife picked up the call and passed it to me in a jiffy. The duty manager was saying to me that several policemen, including an assistant commissioner from the Mumbai Police, were waiting downstairs and I was to go down as soon as possible... ,” recounted Raghu Iyer (Rajasthan Royals CEO), still somewhat apprehensive about what to make of the events on that fateful May morning that changed the course of Indian cricket forever.

The Royals CEO went down within minutes and was met by a team from the Delhi Police, led by an assistant commissioner of police (ACP) in a safari suit. The cops had done due diligence and were there to arrest three of the Royals players on charges of spot-fixing. Iyer had literally been pulled out of bed and was now being told of the arrests. He was helpless, and found it hard to comprehend — as would anyone in his position. All he managed to ask was if the cops had a warrant. They did, and for the next hour, they explained to Iyer all the evidence they had against the three players in question. It was incontrovertible proof; something rotten was going on. “They were in no hurry and only after explaining to me in detail did they tell me that they were going to Ankeet Chavan’s room to pick him up,” said Iyer. There was very little for him to do but feel gutted and apprehensive. The two others, S Sreesanth and Ajit Chandila, had already been nabbed and were waiting in a police van outside.

The Royals owners, away in London, weren’t available then (it was 2am London time) and Iyer was counting down the clock. He needed to inform Rahul Dravid and Paddy Upton, the captain and coach of the team, and figure a way out before the media caught wind of the story.

It was the lull before the storm and Iyer had 120 minutes to prepare himself for the media tornado that was to unleash itself upon the franchise. “I informed Rahul at 8am and he was distraught. He had his hands on his head and just couldn’t speak. To see a player of his calibre and stature having to go through this was painful. None of us really knew what to do except to go ahead and support the investigation. I informed Sundar (Raman), the IPL CEO, and my owners in London. It was decided that we would immediately issue a press release and not try to hide anything.” 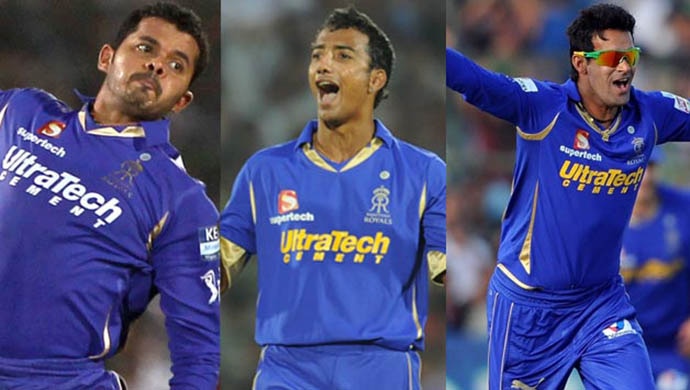 Within moments of the news becoming public, the media went berserk. Rumours of other players also being involved started to do the rounds and critics began questioning the credibility of the tournament at large. All of a sudden, every match of the IPL played in 2013 was under the scanner for suspected corruption, sending the BCCI into a tizzy.

Live pictures of Sreesanth, a double World Cup winner, being paraded like a criminal by the Delhi Police became a rage in India and everyone was keen to know what lay in store for the tainted trio. Things moved fast, with the BCCI ordering a probe into alleged spot-fixing under its anti-corruption chief Ravi Sawani and the Royals filing an FIR against the tainted trio.

(Excerpted with permissions of Simon & Schuster from Eleven Gods And A Billion Indians by Boria Majumdar.)

#Rajasthan Royals, #Sreesanth, #Book Extract, #Match Fixing
The views and opinions expressed in this article are those of the authors and do not necessarily reflect the official policy or position of DailyO.in or the India Today Group. The writers are solely responsible for any claims arising out of the contents of this article.