When Star Sports reduced Dhoni to a hashtag

And mute was the only option.

First, it was in the build-up – the match was being hyped-up as the last match that MS Dhoni was captain – come again, captain of what, Team India? This was not the Indian team, this was India A. And this was not an international match, this was an inconsequential practice match. The type of matches where batsmen retire out (euphemism for declare their innings, so someone else can have a go).

Which is what happened when Ambati Rayudu declared his innings at 100 in the 41st over so those that had come to see Dhoni could see Dhoni.

All this is great, and there is a strong sense that we might be seeing the last of Dhoni, not just skippering the team in blue, but for the last time in blue on Indian soil – at least for a long, long time. Who knows if there will be a next time after this series.

You can sense some of Star Sports’ keenness in milking MSD’s captaincy for all its worth. But to do so all in one game, with their panel of commentators rambling from start-to-finish about all their incoherent, same-old, yes, those very, heard it a thousand time before memories, was an assault on the ears. 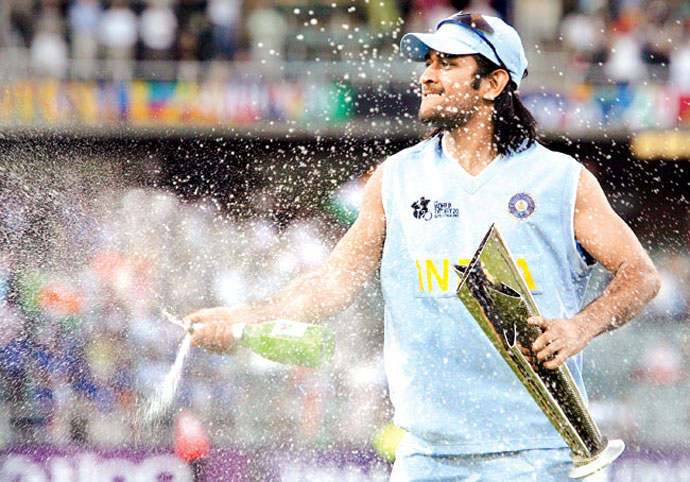 We all have have our favourite Dhoni memories, or for that matter, many memories.

It was as if the broadcasters’ brief to the commentators was: “Remember how you used to shamelessly plug sponsors in the IPL, replace the sponsors with MSD – yeah, just like you would go right over the top with the Yes Bank Maximums, you go at it about Dhoni…build MS Dhoni up like you would build the Martui Vitara Brezza last season… make it sound like the greatest thing ever, think you can do that? Good. And don’t shy away from repetition, that you never have LS, why would you now?”

By doing all this, the commentators and the broadcasters have done MSD a huge disservice. The crowds had packed in, they’d made it to a practice match that few, if any, turn up for. The action, Dhoni’s presence, when he walked out to bat, all spoke for itself.

All eyes were on Dhoni. It brought back memories, more of his mannerisms, more of how, each one of us remember him, each in our own unique way. Not tutored by Star Sports’ propaganda mouthpieces to tell us about 2007, 2011, Champions Trophy, Joginder Sharma, Kenya, again and again, and again.

We were there too. By rambling on and on about MSD, from the start of the match, they compelled us to switch off – to disconnect with not just the match but with MSD, and what could have been something special in its own way, even if was just a practice match.

But they did not relent. They rambled. If there were pauses, it was only when Saqlain Mushtaq or Ashish Nehra were interviewed. While Saqlain spoke of his respect for MSD, rating him amongst his top three captains, after Imran Khan and Wasim Akram, he also talked about how it seemed like it was an India-Pakistan match because of the atmosphere.

After Saqlain’s breather, the mute option had to be applied again.

Then Ashish Nehra, when compelled to mention his favourite MSD moment (or something like that) was nonchalantly dismissive as only he can be – in the few bytes he gave Star Sports, he pretty much rubbished everything that everyone had been going on and on about Dhoni.

For Nehra, it wasn’t the 2007 or 2011 or Champions Trophy memories. For, as Nehra admitted, he knew Dhoni differently – they had both played for India, and it was obvious there was something more private, something more personal, that Nehra held close about Dhoni. He, however, did not reveal what it was.

At that time, a much younger Nehra abusing Dhoni behind the stumps, flashed in front of my eyes. Nehra didn’t mention what it was, his memory wasn’t part of Star Sports #CaptainsLegacy or #CaptainCool package.

It was his. Just like yours and mine - both have our favourite Dhoni memories, or for that matter, many memories. Not everything is a hashtag.

Star Sports, more than others, have had their wits about them. They can take a leaf out of Dhoni’s cap, hold back a bit. It’s way classier. And leaves an impression.

Nehra having a go at Dhoni, now that’s a memory and a half.

Also read: Dhoni's two controversies where his sportsmanship shone through

#Ashish Nehra, #MS Dhoni, #Dhoni
The views and opinions expressed in this article are those of the authors and do not necessarily reflect the official policy or position of DailyO.in or the India Today Group. The writers are solely responsible for any claims arising out of the contents of this article.