Why rise of junior shooters is promising for Indian sports

Explosive performances from the young Indian shooters in the ISSF World Cup in Mexico have come at the right time.

For long, India has been flogging the same set of athletes and hyping them for winning medals on the international stage. Even when athletes are beyond their prime, they like to latch on to glory from previous winning experiences and continue in the sport.

As long as one is doing well, to talk of retirement is not necessary. Yet, when fresh talent arrives on the big stage, like in shooting, it’s good for the sport.

After the lows of the Rio Olympics, where the Indian marksmen did not win a single medal, there was a huge cry at home. Fortunately, the National Rifle Association of India (NRAI) headed by Raninder Singh, himself a shooter, ensured a proper plan was put in place for junior talent to be honed.

Today, if the names of Manu Bhaker, Mehuli Ghosh and Anish Bhanwala are one becoming popular, it’s thanks to performances on the big stage. The first two have won big medals in the ISSF World Cup, and more shooters have done well to provide finite pointers to India’s path ahead.

To be sure, in a sport like shooting, age is not at all a factor. What is heartening is that teenagers are soaking in the atmosphere and firing on the big stage.

With India set to compete in the Commonwealth Games and the Asian Games this year, there is hope the Indian shooters will restore glory. Here comes the catch. Just because the juniors have won medals in the World Cup does not mean they will shoot gold in every competition.

As seasoned coaches Jaspal Rana and Joydeep Karmakar say, you need to give them to mature. To build up hype that they will become medal prospects in the 2020 Tokyo Olympics is creating unnecessary pressure.

The first time you win a medal on the big stage, there is hardly any pressure. It’s only when you go to the bigger competitions and got to prove yourself again, the pressure factor comes in.

Then again, in a sport like shooting, there’s no race against time as people have won Olympic medals in this sport even beyond the age of 45.

Maturity and fine blend is what this sport is all about. After all, even India’s lone Olympic gold medallist Abhinav Bindra had the experience of two Olympics under his belt before emerging air rifle champion in the 2008 Beijing Olympics.

If shooting has kind of recovered and fresh talent is making its presence felt, that does not mean the selectors have ignored the seniors. The seniors have to work more hard to be counted and compete with youngsters to make their way into the squad. 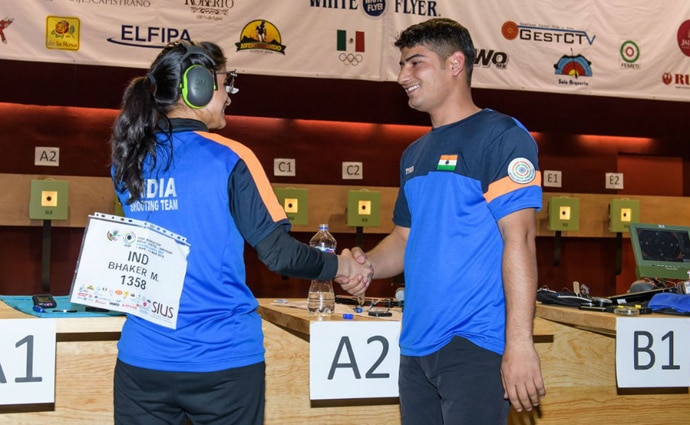 There are lessons to be learnt from shooting for other Indian sports. Hockey comes readily to the mind as the decision to send more youngsters for the Azlan Shah hockey tournament in Malaysia with veteran Sardar Singh as captain has backfired.

Indian hockey has shown promise and after the Rio Olympics setback, they are coming back strongly at the Asian level and in FIH big-ticket events. But to send juniors to the Azlan Shah and rest all the seniors made no sense.

The consequences have been disastrous and India finished fifth in the event. There was no need for such bravado in experimenting with the team selection before the Commonwealth Games in Gold Coast.

History tells us India have not done well in the Azlan Shah tournament for over a decade. To treat it like a B grade event or try and prove a point or two to the Malaysian hockey federation was not required at this point of time.

Talk of junior talent, it was very unfortunate that in gymnastics, Rakesh Patra was made to feel like a beggar. He was forced to seek legal recourse before making it to the Indian team for the Commonwealth Games.

The Gymnastics Federation of India has had its share of problems with the Indian Olympic Association (IOA). Even though the federation has managed to get recognition from the international body, the IOA has been holding up matters despite matters being resolved in the court. Why the IOA appointed its vice president Sunaina Kumari to handle selection matters in gymnastics was baffling. She has no background or connect with the sport.

Of course, Rakesh Patra was a victim as he had differences with a senior coach and probably asked him a few wrong questions.

Indian gymnastics is on the rise and the IOA would do best to end the current imbroglio. The federation needs to function in a free and fair manner and handle selection matters in a professional way.

This is a big year for Indian sport, so all the stakeholders need to come together and ensure the athletes do not suffer.