Is Yuvraj Singh to Virat Kohli what Suresh Raina was to MS Dhoni?

Every captain has his man, welcome to the new era of Indian cricket.

This is an emotional time for Indian cricket. In less than a week, the ownership of our cricket appears to have fallen back to where it belongs; top that, Midas himself decided to call it quits on being called Midas Singh Dhoni. What could possibly happen next, barely six days into 2017, it looks like we're back to 2007 in more ways than one.

In every ode, chat, recollection, rambling tribute for Dhoni, it's been unmistakably 2007. Looking back, it still appears unbelievable. That's how potent the memory is. And while Dhoni was captain, talisman, long haired dude, at his bidding was one Yuvraj Singh. While the records state that Shahid Afridi was player of the tournament, it was Yuvraj's tournament. Yuvraj wasn't yet 25 then. Today, picked for the England ODI and T20 series, he's 35.

Yuvraj last played an ODI for India more than three years back. However, he played a T20 international in March, 2016. In five Ranji Trophy (four day) matches from October to November, last year, he had highest scores of 85, 177 and 260. But numbers are only part of the story with Yuvraj.

Often, a small part. The big story is the backstory. That and the belief that India's new limited over's captain has in him. Possibly as much as he believes in himself if not more. Yuvraj Singh to Virat Kohli is in many ways what Suresh Raina was to MS Dhoni. 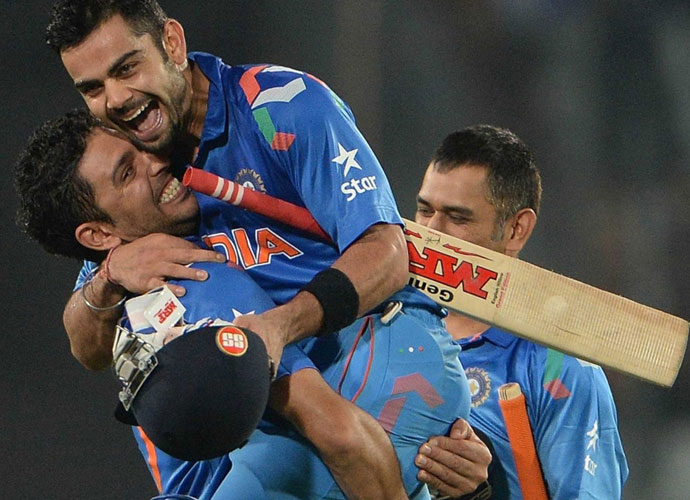 Yuvraj Singh to Virat Kohli is in many ways what Suresh Raina was to MS Dhoni. [Photo: PTI]

Possibly every captain has his man. Who he perceives as his go-to guy. What this go-to guy achieves in the middle is only part of the deal. The hope and confidence this go-to guy's presence instills in his captain is far more.

Then again, there could yet another reason to pick Yuvraj – will this series play out like a farewell for him? Could this also be a farewell series for Dhoni? Speculative as this sounds, neither player look likely to be part of India's 2019 World Cup campaign.

Playing Yuvraj and Dhoni one last time could turn out to be the ultimate cricket soap, and a tearjerker at that. Six matches to be played, with the last ODI at Eden Gardens and the last T20 in Bangalore. Huge arenas, packed houses, what theatre, what a prospect.

While most Indians hope for a fairytale ending, England will prove to be far more potent in the shorter format. Eoin Morgan's team is largely different from the Test side, and will hit India hard with their top order. The shortcomings against spin too will be largely negated because of the format, even more so in the T20.

Beyond Yuvraj and Dhoni, this will be a big series for Shikhar Dhawan who makes a comeback because of Rohit Sharma's injury. In Rohit's absence, this could also be a very good time to replicate RCB's successful opening pair that had the audacity to sideline Chris Gayle – India opening with Virat Kohli and KL Rahul in T20s could be the way to go.

And if they get a move on, like they did in the IPL, there won't be much finishing for Yuvraj and Dhoni to worry about. If 2017 is even remotely like 2016 for Virat Kohli, you can bet he'll want to win both the series 3-0, almost singlehandedly, with a little help from friends, Ashwin and Jadeja.

Right now, part of Virat's mind will be playing out that victory lap for @msdhoni bhai and @Yuvstrong12 bhai. Stay tuned, it's Wednesday, 1st February, 2017. Any time after 21:00 hours IST.

Expect even more emotion, possibly as much as on that sun kissed afternoon in Wankhede on November 13th, 2013.

Post your comment
#Yuvraj Singh, #Virat Kohli, #Mahendra Singh Dhoni
The views and opinions expressed in this article are those of the authors and do not necessarily reflect the official policy or position of DailyO.in or the India Today Group. The writers are solely responsible for any claims arising out of the contents of this article.