Novak Djokovic vs Australia visa battle: What has happened so far in 5 points

The world today stands divided over Serbian tennis star Novak Djokovic’s visa battle in Australia. For the unversed on the topic, Djokovic has been battling entry into Australia to participate in the Australian Open tournament with his unvaccinated status, amid a stringent Covid-19 protocol in the country.

It is as if Novak Djokovic has become the heroic and famous voice for all the anti-vaxxers in the world. Djokovic has been known throughout his career to have made through adversary with his stubbornness and resilience. But the Australian government seems to be having none of his stubbornness over Covid-19 vaccination.

Here are the recent updates on Novak Djokovic’s saga Down Under:

Novak Djokovic, who was embroiled in a legal battle in Australia over his visa being revoked on arrival, had a surprise win in court. An Australian court quashed the original appeal to revoke the tennis star’s visa, saying that he was allowed to enter the country after being granted a medical exemption.

For now I cannot say more but THANK YOU all for standing with me through all this and encouraging me to stay strong ????

Soon after the court victory, Novak Djokovic tweeted that he’s thankful to his fans for standing with him through the ordeal. He said that despite all that has happened, he’ll stay in Australia and participate in the tournament.

While Djokovic may have won his right to participate in the Australian Open in a court, the Scott Morrison government can still make a decision to deport the tennis star at their personal discretion. The immigration minister can take a call on banning Djokovic’s entry into the country for the next three years.

However, the family ended the presser abruptly when asked about a few questions related to Djokovic testing Covid-19 positive in December 2021 and his public appearances subsequently.

Novak Djokovic got a medical exemption from Covid-19 vaccination based on his December 2021 PCR positive test report. Djokovic had apparently tested positive for Covid-19 on December 16, 2021, and the report was known by 8 pm. 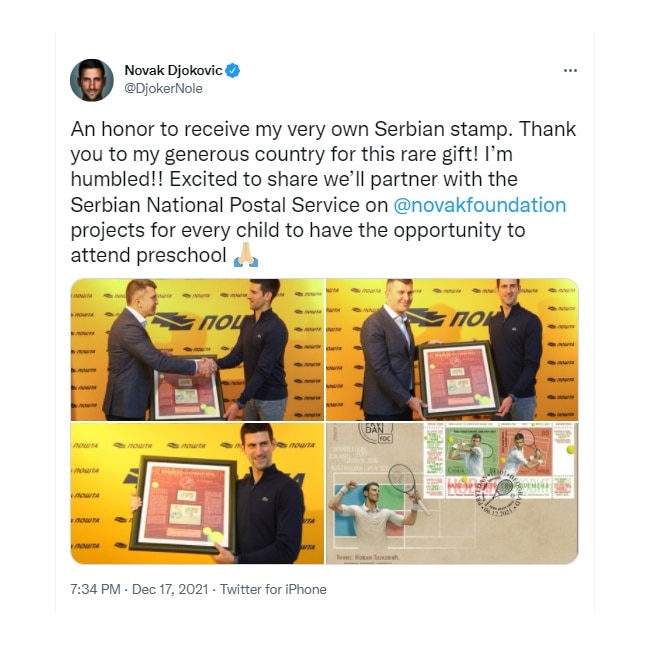 Djokovic or his family has so far not clarified on this. On the other hand, the Australian immigration protocol requires foreigners not to have travelled 14 days prior to their arrival in Australia. In Djokovic’s case, he was reportedly training in Spain on December 31, 2021. And he even flew from Spain to Australia via Dubai on January 4, 2022.

Lying on immigration forms could be dealt with as a criminal offence in Australia.

Currently, foreigners are not allowed entry into the country without being fully vaccinated or having a medical exemption. The country, which has seen several of its cities being thrust under brutal lockdowns to control the virus, has not taken kindly to a VVIP being exempted from the rules.

There is pressure on the Morrison government to act. It needs to be seen what decision the government takes in Djokovic’s case. Nonetheless, his case has dealt some damage to the Serbian and Australian diplomatic relations.