The Serbian President, PM reacted harshly to the deportation of Novak Djokovic by a ruling of Australian Federal Court on Sunday which upheld his visa cancellation unanimously.

Serbian tennis superstar Novak Djokovic lost his court battle in Australia on Sunday, and left the country with dreams of clinching a record 21st Grand Slam dashed. Djokovic's visa cancellation order was not overturned by the three-judge bench of Australian Federal Court. The court was unanimous in its decision to reject Djokovic’s appeal against Australian Immigration Minister Alex Hawke’s decision of cancelling the Serbian player's visa on good health ground and public interest, CNN reported.

On January 14, 2022, Hawke used his discretionary powers to cancel Djokovic’s visa for the second time, jeopardising his chance to play at the Australian Open on January 17. 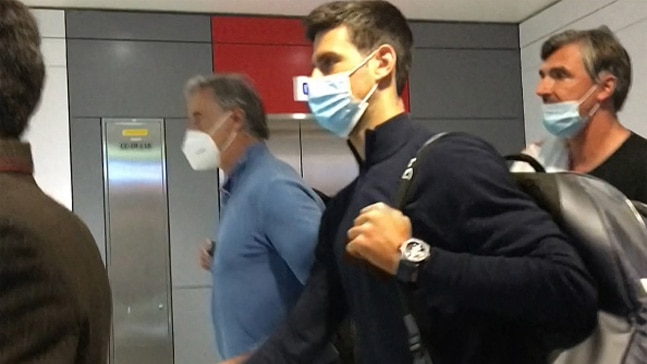 Novak Djokovic leaving for Dubai on Sunday after his visa was cancelled by the Australian Federal Court. Photo: Getty Images

Djokovic said he was disappointed over the court’s ruling and wanted some time off to take rest and recuperate before he makes any further comments on the visa saga. Djokovic was escorted to the airport by two immigration authorities officials, to take the flight out of Australia to Dubai at 10.30 pm Australia time.

Here is a statement from Djokivic:

A statement from Novak Djokovic as he prepares to leave Australia. #AusOpen pic.twitter.com/gjxpnC6ylu

The 20-time Grand Slam champion was looking to defend his 21st title, before he was shown the door in a turn of events that looked out-and-out political. Alex Hawke, who cancelled his visa a second time in public interest, said that Djokovic's presence could shore up anti-vaccine sentiments in Australia, which has battled deadly waves of Covid-19. The Australian Prime Minister Scott Morrisson gave a thumps up to Djokovic’s deportation from Australia.

The Serbian government extended its full support to the tennis superstar and said that Djokovic was a victim of a 'political witch hunt', AFP reported.

Here is a brief on what the Serbian government said:

Speaking to the media, Vucic said that Australian authorities have not humiliated Novak but themselves. He lashed out at the Australian government authorities for '10 days of torture' of the Serbian tennis superstar and the slanderous media campaign.

Vucic said that the Australian government could have said it right at the beginning that only vaccinated people are allowed in the country, but they didn’t. He said that the government is now telling a different story, including the medical exemption, which they had forgotten earlier.

The Serbian President called the entire court hearing a farce, full of lies. He lashed out at the Australian government’s false data about vaccination rate in Serbia, which Immigration lawyers said was below 50 per cent. Vucic countered this by saying that the official figure of the percentage of the people vaccinated is 58%.

He called the court hearings pointless. He also said that Serbia’s vaccination rate is higher than many European countries. "It is a pointless argument by the Australian government authorities but that’s possible in Orwellian performances," said Vucic.

He criticised the Australian government of mistreating the world's best tennis player for 11 days, and on the eleventh day hand him the decision made on the first day, Serbian publication Novosti reported.

3. ILL-TREATMENT BECAUSE OF BEING A SERBIAN Serbian President Aleksander Vucic also said that Djokovic was ill-treated because he was from Serbia, and if he was from another country, the approach would be completely different, The Guardian reported him as saying. Vucic said that the country is waiting for Djokovic’s return to Serbia. “He is our champion and lives in our hearts,” Vucic said.

Serbian Prime Minister Ana Brnabic came down heavily on Australia for the deportation of Novak Djokovic. Speaking to Beta News Agency in Belgrade, Serbia, reported by Associated Press, she said that its unbelievable that there are two contradictory court decisions within a span of a few days. She said, taking a pot shot at Australia, that she felt disappointed at how the rule of law is not functioning in other countries.

Tennis superstar Rafael Nadal finally broke his silence on the whole Djokovic vs Australia saga, and said that while there is no doubt Djokovic is one of the greatest players in the game, no player is as big as the event.

Speaking to Senior Editor of Racquet Magazine, Ben Rothenberg, Nadal said that no player is bigger than the Australian Open, and the tournament will be great with or without him. He added that players come and go and new players are coming in.